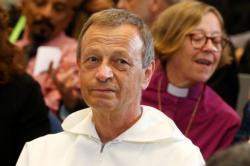 Brother Alois Leser, prior of the Taize ecumenical community in France, is pictured before an encounter at the World Council of Churches’ ecumenical center in Geneva in this June 21, 2018, file photo. (CNS photo/Paul Haring)

ROME (CNS) — The brothers of the ecumenical Taize community said they have received five reports of sexual assaults on minors committed by three of their members in a period from the 1950s to the 1980s.

All of the cases have been reported to French police, said a statement from the community superior, Brother Alois, posted June 4 on the Taize website.

Each year, some 100,000 teenagers and young adults make a pilgrimage to Taize, about 60 miles north of Lyon. The ecumenical community offers Bible study, fellowship and long periods of silent prayer punctuated by singing.

Brother Alois’ statement said two of the accused brothers have been dead for more than 15 years. The other brother was not named in the statement and it did not say where he was living or if restrictions had been placed on him.

The community, which numbers more than 100 brothers — both Catholic and Protestant — is not a Catholic religious order and does not fall under Catholic Church rules for handling abuse allegations, although Taize has adopted some of the church’s child-protection provisions.

“When I was informed of these accusations,” Brother Alois said, “my first concern was to listen, with other brothers, to the victims in an absolute respect for their words, to hear their suffering and to remain alongside them to the best of our ability.”

“In recent years in the society and in the church, an understanding of the gravity of every violation of a person’s integrity has fortunately deepened,” Brother Alois wrote. “This finds an echo in the evolution of French law, which requires that every case be reported, independently of the date on which the acts were committed.”

So, the Taize superior said, “after having spoken beforehand with the victims, I have just informed the public prosecutor of these five situations.”

He also noted that since 2010, the Taize community website and the printed information sheet given to every guest include both security and safeguarding notes.

“If you become aware of any sexual abuse or any kind of violence, especially toward a minor, or any other suspicious behavior, please speak about it immediately with the brother responsible for safeguarding in Taize,” with one’s group leader, with one of the sisters working in welcoming pilgrims or with a staff member at the first-aid station, which is open 24 hours a day, the notice says.

In addition, it advises that “anything that happens, whether recently or not, can be communicated to the brothers by writing to protection@taize.fr.”

“The messages sent to this address are received by two brothers, a sister of St. Andrew and a person exterior to the community,” it says.

Brother Alois’ message June 4 said reporting the five incidents to police “is part of an attempt to ascertain the truth,” a process that “had already begun by listening to the victims.”

“Still today,” he said, “our first thoughts go out to them; in hearing what they experienced and suffered, we feel shame and deep sorrow.”

The brothers of Taize, he said, know that by publicizing the five allegations, other victims may come forward. “We will listen to them and will remain alongside them in the steps that they choose to take,” he said.

“We are convinced that it is only by bringing to light these acts that, with the assistance of persons outside the community, we will help to protect effectively all those who show us their trust by coming to Taize,” he said.