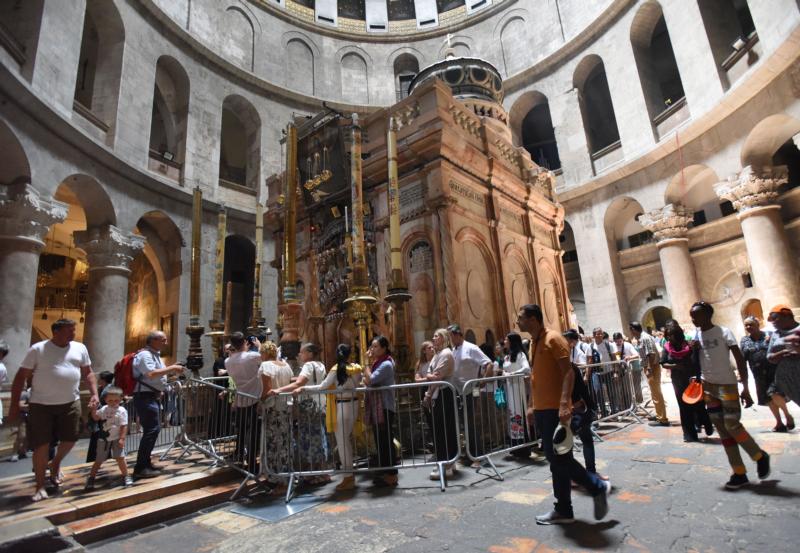 Tourists walk around the tomb in the Church of the Holy Sepulcher in Jerusalem’s Old City, June 13, 2019. Following the successful cooperation on the 2016 restoration of the Edicule in the Church of the Holy Sepulcher, the leaders of the Greek Orthodox, Catholics and Armenian Orthodox, who serve as guardians of the holy site, have signed an agreement to continue with restorations, this time on the pavement and foundations around the tomb. (CNS photo/Debbie Hill)

JERUSALEM (CNS) — Following the successful cooperation on the 2016 restoration of the Edicule in the Church of the Holy Sepulcher, the leaders of the three churches who serve as guardians of the holy site have signed an agreement to continue with restorations, this time on the pavement and foundations around the tomb.

The Edicule shrine is revered by Christians as the site of the remains of the cave where Jesus was buried and rose from the dead. During its 10-month restoration, it was determined that the 19th-century structure remained endangered because of the humidity of the soil beneath the foundations the church, and further work was needed to stabilize it.

The Greek Orthodox, Catholics and Armenian Orthodox agreed to the floor project. Two Italian academic and scientific institutions will undertake the two-stage project under the supervision of a joint committee of the three communities. The previous restoration work was led by Greek experts.

According to the Franciscan Terra Sancta magazine, the current pink stone pavement rests on a metal structure damaged by rust; condensed moisture from leaking underground pipes — some dating back to the Ottoman Empire — and runoff rainwater have accumulated in the underground space.

Restoration work would also help shed light on various archaeological discoveries found in the last century by Father Virgilio Corbo, a Franciscan archaeologist. He discovered the remains of the basilica built by Emperor Constantine beginning in 324; the remnants of the earlier foundations of the Temple of Hadrian, constructed in 135; and first-century tombs near Calvary as well as the graves of Crusader knights, according to the magazine.

Some of the pavement tiles, which come from different time periods, will be restored while others will need to be replaced, he said.

In his statement at the signing of the agreement, Father Patton noted that, following the inauguration of the restored Edicule in March 2017, the number of pilgrims visiting the site doubled in size. He told CNS the new restoration had the “added value” of ongoing collaboration among the three religious communities.

All three communities will help finance the project with a joint fundraising campaign as well as with financial assistance pledged by the Vatican and King Abdullah II of Jordan.

Father Samuel Aghoyan, the Armenian superior of the Church of the Holy Sepulcher, also noted that additional infrastructure renovations are needed, including installation of new water pipes and electrical lines as well as special underground cables for video cameras used by the media covering events inside the church.

He said the renovations would take place section by section in order not to disturb the pilgrims visiting the site, allowing them access to the sanctuary and especially to the Edicule.

NEXT: Chilean steps down just before ordination as bishop