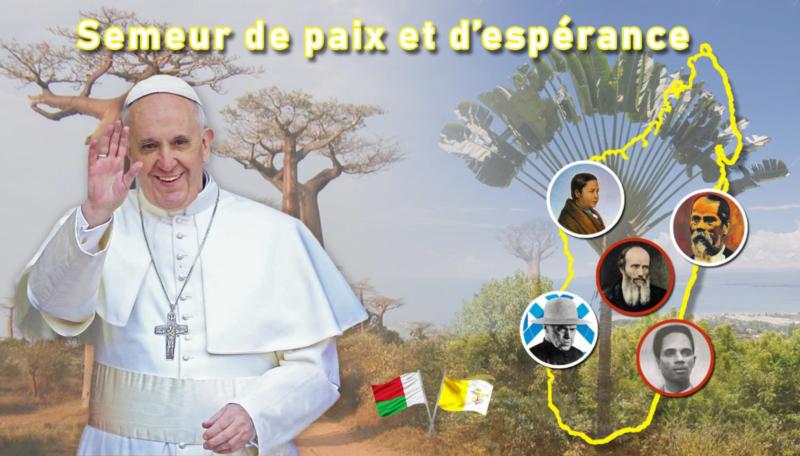 This is the logo for Pope Francis’ trip to Madagascar. The Vatican confirmed that Pope Francis will visit the island nation as well as Mozambique and Mauritius Sept. 4-10. (CNS photo/Vatican Press Office)

Publishing an initial schedule for the visit June 28, the Vatican listed the main events — from meetings with government officials and Masses to a visit to a local hospital — but it did not provide precise times for most events.

The following is the initial schedule; times listed are local, with Eastern Daylight Time in parentheses.

— Courtesy visit to the president at the Palacio da Ponta Vermelha, the official presidential residence.

— Meeting with authorities, leaders of civil society and the diplomatic corps at the Palacio da Ponta Vermelha. Speech by pope.

— Interreligious meeting with young people at the Maxaquene Pavilion. Speech by pope.

— Lunch at the apostolic nunciature.

— Meeting with the bishops, priests, religious, seminarians and catechists at the Cathedral of Our Lady of the Immaculate Conception. Speech by pope.

— Visit to Zimpeto Hospital outside Maputo. Greeting by pope.

— Courtesy visit to the president in the Iavoloha Palace.

— Meeting with government authorities, leaders of civil society and the diplomatic corps in the Ceremony Building. Speech by pope.

— Recitation of midday prayer in the Discalced Carmelite monastery. Homily by pope.

— Meeting with the bishops of Madagascar in the Andohalo cathedral. Speech by pope.

— Visit to the tomb of Blessed Victoire Rasoamanarivo.

— Vigil with young people at the Soamandrakizay diocesan field. Speech by pope.

— Mass at the Soamandrakizay diocesan field. Homily by pope.

— Lunch with the papal entourage at the nunciature.

— Visit to the Akamasoa “Community of Good Friends.” Greeting by the pope.

— Prayer for workers at the Mahatzana building site. Prayer by pope.

— Meeting with priests, religious and seminarians in the College of St. Michael. Speech by pope.

— Mass at the monument to Mary, Queen of Peace. Homily by pope.

— Lunch with members of the Epicopal Conference of the Indian Ocean.

— Private visit to the Shrine of Blessed Jacques-Desire Laval, the “apostle of Mauritus.”

— Meeting with the prime minister in the presidential palace.

— Meeting with government authorities, civil society leaders and the diplomatic corps in the presidential palace. Speech by pope.

— Farewell ceremony at the Antananarivo airport.

NEXT: Secrecy of confession must never be violated, Vatican says