$28 million distributed to religious orders to care for aging members 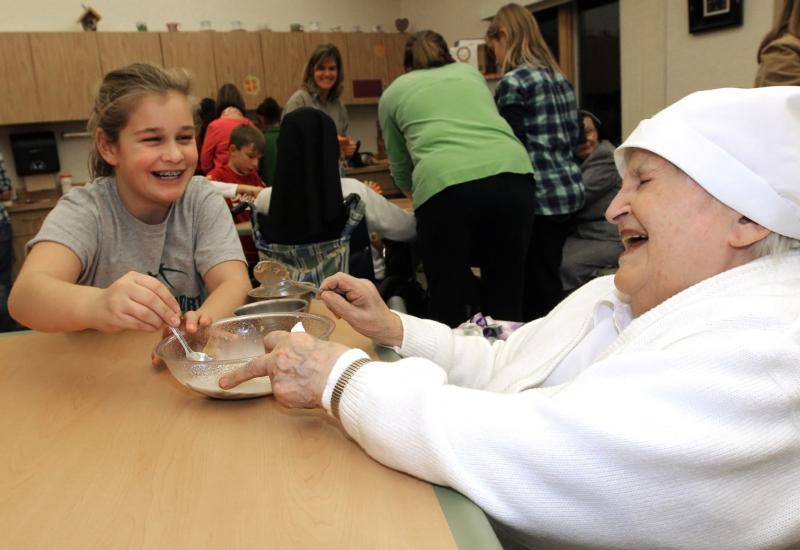 A religious sister shares a laugh with a girl at the Sorrowful Mother retirement home in Oshkosh, Wis., Nov. 22, 2011. Orders of women and men religious received, collectively, $28 million from the National Religious Retirement Office, the umbrella group that coordinates the annual Retirement Fund for Religious campaign in parishes and dioceses nationwide. (CNS photo/Jeannette Merten, The Compass)

The $28 million distribution, announced July 8, took place in June. It totals more than the amount raised in last year’s collection, which was $27.7 million. The distribution also is $3 million more than last year’s disbursement of $25 million.

The funds are used by orders — sometimes called institutes or congregations by their members — for what is known as direct care assistance. According to a July 8 announcement of the fund distribution, religious communities combine these funds with their own income and savings to help meet expenses such as prescription medications and nursing care.

The funding disbursed represents the bulk of financial assistance distributed by the National Religious Retirement Office, which is at the headquarters of the U.S. Conference of Catholic Bishops in Washington. Over the years, this support has helped many religious communities to stabilize their retirement outlooks.

No breakdown was provided on which orders received funds, or how much they received.

“We are exceedingly grateful to concerned Catholics across the United States,” said a July 8 statement by Presentation Sister Stephanie Still, executive director of the National Religious Retirement Office. “Their ongoing generosity to the Retirement Fund for Religious allows us to help communities who need immediate assistance in caring for aging members.”

The Retirement Fund for Religious collection, first authorized by the U.S. bishops in 1988 and taken up each December, has been the most popular collection since its first year. In all, $803 million has been distributed to religious orders since 1989. Eighty to 90 percent of the funds distributed is directed to direct care of aging members.

NEXT: New commission to review role of human rights in U.S. foreign policy