Carlson: Release of abuse allegations ‘painful,’ but ‘right thing to do’ 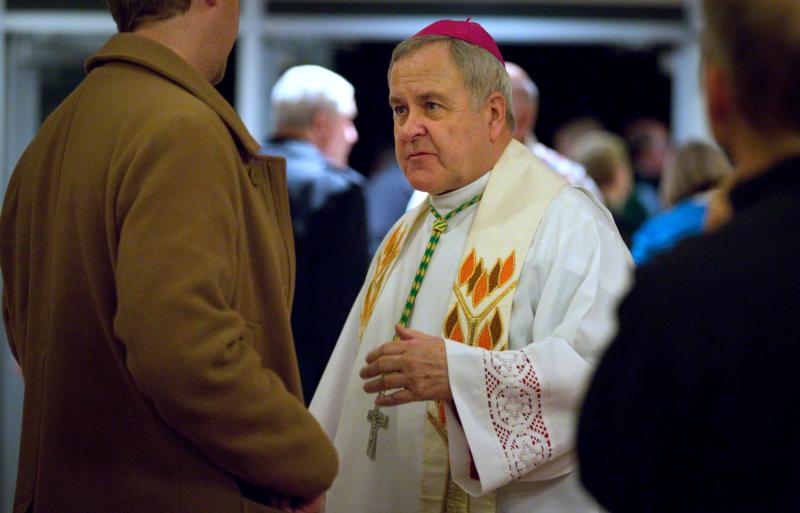 St. Louis Archbishop Robert J. Carlson is pictured in a Nov. 24, 2014, photo. As the Archdiocese of St. Louis released a list of names of archdiocesan clergy with substantiated allegations of sexual abuse of a minor July 26, 2019, Archbishop Robert Carlson acknowledged that seeing the names “will be painful” and publishing them “will not change the past.” (CNS photo/Lisa Johnston, St. Louis Review)

WASHINGTON (CNS) — As the Archdiocese of St. Louis released a list of names of archdiocesan clergy with substantiated allegations of sexual abuse of a minor July 26, Archbishop Robert J. Carlson acknowledged that seeing the names “will be painful” and publishing them “will not change the past.”

“Nothing will” change the past “but publishing their names is the right thing to do,” he said in a message to the faithful of the archdiocese, and it fulfills a promise he made last September to do so.

“It will be painful for all of us to see the names of clergy accused of behavior we can barely allow ourselves to imagine,” Archbishop Carlson said.

“For years, victims have carried the burden of the crimes committed against them. In talking with many of them, I have witnessed the devastating impact on their lives and the lives of their loved ones,” he said, adding that the release of these names “is an important step in the long process of healing. And we are committed to that healing.”

The list is available online at www.archstl.org/list, along with the text of the archbishop’s message and a video message. The list itself is divided into four categories:

— Clergy of the Archdiocese of St. Louis with substantiated allegations of sexual abuse of a minor: 44.

— Clergy of the Archdiocese of St. Louis with substantiated allegations of sexual abuse of a minor, first allegation made after clergy death: 12

— Clergy from other dioceses who served in the Archdiocese of St. Louis for a period of time and have substantiated allegations of sexual abuse of a minor: 5

— Clergy with substantiated allegations of possession of child pornography: 3.

“Please be assured that no priest or deacon of the Archdiocese of St. Louis against whom there has been a substantiated claim of sexual abuse of a minor is currently serving in ministry,” Archbishop Carlson stated. “Important facts regarding each member of the clergy who is named, including their status within the church, are detailed on this list.”

The list also is published in a special edition of the archdiocesan newspaper, St. Louis Review, and available online at http://www.archstl.org/st-louis-review.

In a message, editor Teak Phillips said: “This special edition of the St. Louis Review was published to disseminate as widely as possible the names of clergy who have had substantiated allegations of sexual abuse of a minor. It also is intended to inform the faithful of the actions the Archdiocese of St. Louis and the Catholic Church have taken to prevent such future abuse.”

The special edition also was being distributed to all recipients of Catholic St. Louis magazine, the paper’s bimonthly sister publication, which goes to more than 150,000 households.

“Additionally, the list is being shared with the Missouri attorney general,” Archbishop Carlson said in his message. “The Archdiocese of St. Louis will continue to work in full transparency with the attorney general’s office throughout its review of clergy personnel records, which is ongoing, to ensure that any new information regarding allegations of sexual abuse of minors by clergy is considered and handled appropriately.”

The list, he noted, “is the result a long and extensive investigation conducted by a third-party agency staffed with skilled investigators, formerly of the FBI and state law enforcement.”

“The results were provided to the Archdiocesan Review Board — a board composed of a majority of lay members who are not employed by the Archdiocese of St. Louis,” he explained. “The review board produced the list and shared it with me for final review. I have accepted the results of this investigative process.”

The information released by the archdiocese also noted that:

— No instance of alleged sexual abuse of a minor has been substantiated by the Missouri Children’s Division since the implementation of the charter.”

— “In keeping with the requirements of the charter, any archdiocesan employee or volunteer — clergy or lay — who is found to have a substantiated allegation of sexual abuse of a minor is removed permanently from ministry and/or employment.”

Archbishop Carlson encouraged anyone who has been abused and not yet come forward to report it to state and local authorities. He asked anyone who knows of sexual abuse of minors or misconduct by a member of the clergy, an employee or volunteer in the archdiocese to call the Office of Child and Youth Protection at (314) 792-7704.

Names of any additional clergy found to have substantiated claims of sexual abuse of minors against them, based on new information, will be added to this list, he said.

Archbishop Carlson said he prays and asked all Catholics to pray with him “to our blessed Mother Mary: ‘Mother of mercy, help us by your prayers. Help victims to heal. Help the church to be purified. Help bishops and priests to repent, to return to Jesus with a purified faith, and become instruments of His salvation.”

“God continues to call all of us to him through his church,” he continued. “I ask all of you to join me in heartfelt prayer, with the Eucharist in mind, that this work will help bring peace to the victims and their families. I pray that he will help us all remain vigilant in righting past wrongs, fulfilling our promise to protect, and restoring trust in his church, its leadership and his divine plan for salvation.”

He concluded: “I pray that, in this moment, we will be rich in the healing power of Jesus, rise out of the darkness of this tomb, grow stronger in the light of his love and mercy, and praise him unceasingly for his promise of eternal life.”

NEXT: Cupich: ‘Never forget’ policies that led to Holocaust began with words