Catholic schools in Memphis to reopen as charter schools this fall 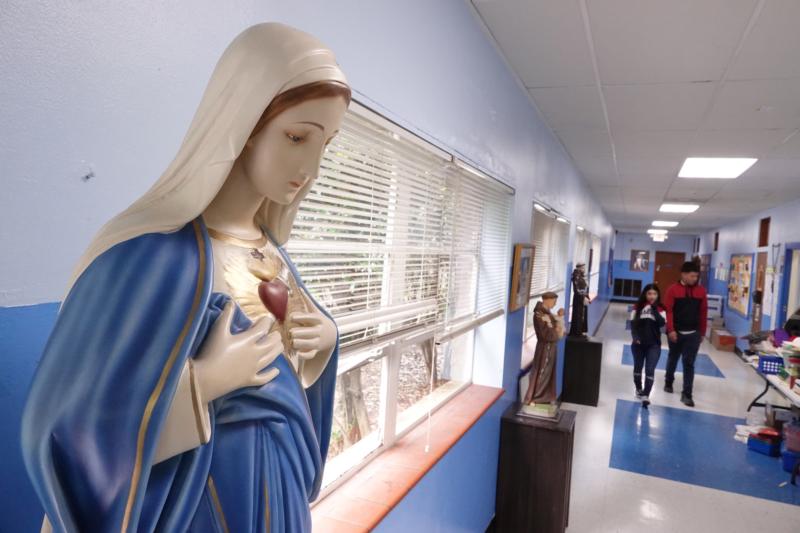 MEMPHIS, Tenn. (CNS) — As this school year wound down, the halls of the Jubilee Catholic Schools in Memphis, which opened 20 years ago, became still.

For students, faculty and staff, it was hardly the usual end-of-the-year packing up, because when these nine schools reopen in the fall they will not be Catholic schools but charter schools.

So, at the school year’s end, boxes of religious books sat near statues, waiting to be removed. Children picked up rosaries and prayer cards as they passed through the halls from tables that were filled with church materials, library books and other religious items that are no longer going to be allowed inside these schools.

Students passed an armless Jesus in the hallways of Memphis Catholic with a plaque that reads: “We Are His Arms In The World.” The crucifix will be gone when they return.

In 1999, a multimillion-dollar donation from an anonymous group of donors allowed for the reopening of the first Jubilee schools in the hopes of educating some of the city’s poorest children. The resurrection of several once-closed Catholic schools was called a “Miracle in Memphis.” But now, for teachers and administrators who know what these schools meant in the lives of their students, that miracle has vanished before their eyes.

Mary McDonald, the former superintendent of Catholic Schools for the Diocese of Memphis, who created the Jubilee Network, told USA Today she feels like a parent seeing her child graduate from college or get married.

“Now it’s time for the child to move on and do what is the next best thing in that child’s life,” she said.

When she formed the network nearly 20 years ago, McDonald said, the educational options for students in poverty were limited to Memphis City Schools but she said the landscape has changed significantly since then, and there are others who can do the same work.

In 2012, she told Catholic News Service that when she started her job as school superintendent in 1998, now-retired Memphis Bishop J. Terry Steib told her he wanted Catholic schools back in the city. “He also told me there was no money to do this.”

She knew local Catholics, who made up only 4% of the population, could not finance these schools alone, so she turned to the broader community and convinced members of the community that restoring Catholic education in the city was a worthwhile investment.

Over the years when she asked for help, she said, it was never with the mentality of asking for money for a sinking ship. Instead her plea has always been: “Here’s our plan, come along with us.”

But this year, the Catholic Diocese of Memphis closed the nine Jubilee Catholic Schools at the end of the school year due to financial shortfalls. The endowment wasn’t enough to sustain a school system serving approximately 1,500 mostly non-Catholic students, many of whom went to school paying little or no tuition.

Connie Hegwood, principal of Our Lady of Sorrows in Frayser, said the parents of her students want their children to go to Catholic schools. She knows many of them will no longer be able to afford to send them to the few (tuition charging) Catholic schools that remain.

McDonald once said of these children, “We educate them because we are Catholic, not because they are. We teach the children who need us. When we closed those schools, we left more than old buildings behind. We left children, and those children need us now more than ever.”

Now, those Catholic schools are closing a second time and many of those children still need the church and many of the schools’ students will be going on to the charter schools in the same buildings.

A statement from the diocese cites the rise of charter schools, the creation of six suburban public school districts and “the increasing financial challenges for our diocese and our Jubilee Catholic Schools.”

The statement also makes clear that while the charter school network won’t be affiliated with the diocese, it will “benefit from the strong academic foundation and values formed over the last two decades by the Jubilee Catholic Schools.”

NEXT: West Virginia woman shares her story of addiction and recovery