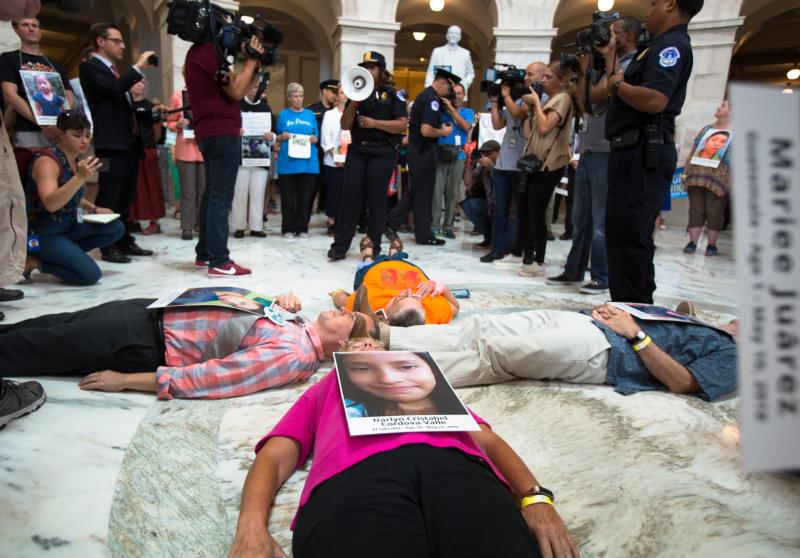 Catholic leaders and advocates lay on the floor of the Russell Senate Office Building in Washington July 18, 2019, to protest the Trump administration’s handling of detained immigrant children. (CNS photo/Tyler Orsburn)

WASHINGTON (CNS) — A few hundred Catholic activists, including dozens of women religious, gathered outside at the foot of the U.S. Capitol July 18 urging politicians to stop the “inhumane treatment” of immigrant children at the border and reminding people of faith to take a stronger stand against current U.S. border policies.

The rally, on a sweltering Washington morning, included times of prayer, a few songs and several speeches. At one point, someone in the crowd started chanting, “Where are the bishops?” which was echoed by many participants, but later in the program, speakers read excerpts from messages that had been sent to the group from several U.S. bishops, thanking them for participating and urging them to continue to speak up about the border crisis.

A message from Bishop Robert W. McElroy of San Diego said in part: “We stand in a moment when our government has weaponized fear — the fear being sown within our nation as a whole that refugees and immigrants, who have been America’s historic lifeblood, have now become the enemy; and the even more reprehensible fear being unleashed upon the hearts and souls of immigrant mothers and fathers that they will be separated from their children purely as an act of intimidation.”

Many of the speakers at the “Catholic Day of Action for Immigrant Children,” organized by the groups Faith in Public Life and Faith in Action, were primarily women religious who stressed the need to end the current practice of placing children in detention centers at the border and emphasized that the need to start a new wave of protest against these policies should be viewed as a pro-life stance.

Sister Carol Zinn, a Sister of St. Joseph of Philadelphia, and executive director of the Leadership Conference of Women Religious, told the group: “Catholic sisters have a long history with immigrant communities. We have seen the pain, suffering, fear and trauma firsthand. In recent months, as the humanitarian crisis has escalated, we have joined the tens of thousands who are outraged at the horrific situation at our southern border.”

She pointed out that women religious have been ministering to those in need and donated money to support those seeking safety, freedom, security and a better life for their families. “We are here today because of our faith. The Gospel commands, and the values of our homeland demand, that we act,” she added.

The message of urgency was essentially speaking to the choir because these activists, who showed their support with rounds of “Amens!” were clearly not new to this issue and many attended the rally particularly for its finale: when the arrests of 70 people for civil disobedience took place at the adjacent Russell Senate Office Building.

Those arrested were charged with “incommoding, crowding, and obstructing” and had to each pay a $50 fine or request a court date. They were released that afternoon.

A young mother from El Salvador held her baby as she addressed the crowd in Spanish. In remarks, which were translated, she thanked the group for their efforts to help immigrants and said she is seeking sanctuary, but she is afraid she will be separated from her baby.

As groups of tourists walked by and men and women in business attire headed toward Capitol Hill, they couldn’t help but see the signs held aloft with messages such as “Franciscans for Justice,” “Let Children Be with their Parents” and “Catholics for Families: Together and Free” as well as placards with images of children who have died in U.S. custody at the border.

Mercy Sister Patricia Murphy, a 90-year-old from Chicago, who came to the event to take part in the civil disobedience, told Catholic News Service right before the rally that she “couldn’t not be here.”

The sister wore a purple shirt identifying her as a Sister of Mercy, a pin that said: “You are my Neighbor” and carried a placard with the face of Felipe Gomez Alonzo, an 8-year-old from Guatemala who died from illness while in U.S. immigration custody after crossing the border with his father.

Sister Patricia said this would be her sixth arrest and she hoped the action would move others to do more. For the past 12 years, she has kept vigil, praying and protesting outside an immigrant detention center in Chicago every Friday morning.

Prior to the civil disobedience arrests at the Russell Senate Office Building, participants continued to hold signs with their message and speak out in protest. After warnings from police that they would be arrested if they stayed in the building’s rotunda, those who chose to stay recited the Hail Mary as they waited to be handcuffed and escorted out by police.

Moments before the arrests, Sister Donna Korba, a Sister of the Servants of Mary in Scranton, Pennsylvania, said her participation at the day’s gathering stemmed from her life of activism including recently volunteering at the U.S.-Mexico border with other sisters last December and the 12 years she spent in Guatemala.

“There are no easy answers, but we need to look at root causes of immigration,” she said, recalling that when she asked one father from Guatemala why he would make the arduous journey to the United States he told her: “Because my children are hungry.”

PREVIOUS: ‘We need a habitat on the moon,’ says former NASA flight director

NEXT: Bishop urges lawmakers to end ‘stranglehold’ on immigration to U.S.