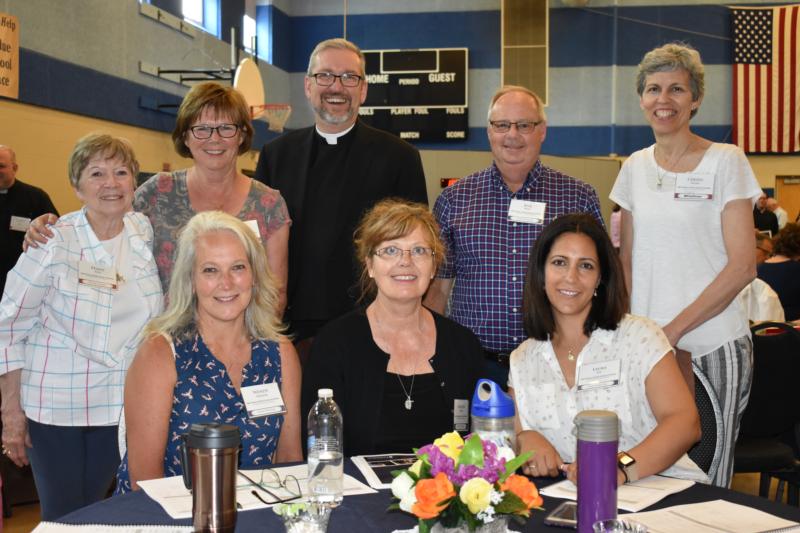 “The 40 hours was a blessing,” Wong said of multiple jet flights, spurred by a fellow parishioner who had just initiated ChristLife at their church. “I had a lot of time for myself, silent time so I can do my reflection. In the same time, it gave me the chance to do preparation work for our parish formation when I get back to Malaysia.”

The three-day conference, held June 26-28 at Our Lady of Perpetual Help Church in Ellicott City, offered two tracks for attendees: core training for newcomers and a deeper track for those returning. Even though Wong’s parish in Southeast Asia is using ChristLife, he is following the core training track.

“Because we have just started running the ChristLife program,” he said, “I’m here to see the next steps and prepare for the future programs.”

In his 10 years as a member of his parish formation team, Wong has seen a growing emphasis on evangelization.

“This year, being the missionary year declared by Pope Francis, I want to see what else I can do in a bigger way,” he told the Catholic Review, the news outlet of the Baltimore Archdiocese. “It’s very urgent.”

A little closer to home — or North America, at least — eight parishioners who are part of the Elgin Roman Catholic Family of St. Thomas, Ontario, decided to take the journey to learn more about bringing ChristLife into their five parishes.

Maureen Bedek, who assists the parish pastoral council and volunteers with the staff of all five parishes, watched ChristLife videos online and believes that it is exactly what the faith community has been looking for.

According to Pete Ascosi, who joined ChristLife in 2005 and now serves as its assistant director, about 190 people from at least two foreign countries, 17 states, 30 dioceses and 55 parishes gathered for this year’s conference.

“The majority would be parish leaders who are looking to receive the training in the three courses of ChristLife, who want to have an immersion experience in the dynamics of the course content,” Ascosi said, “There is definitely a mix of spiritual inspiration and training.”

According to its website, https://christlife.org, Baltimore-based ChristLife “equips Catholics for the essential work of evangelization so that all people might personally encounter Jesus Christ and be transformed into his missionary disciples.”

The conference offered sessions on facilitating small groups in evangelization; reaching new people in surrounding communities; and going deeper in faith to be a better disciple.

Keynote speakers included Dave Nodar, who founded ChristLife in 1995; Andrew Comiskey, founder and director of Desert Stream/Living Water Ministries; Father Erik Arnold, pastor of Our Lady of Perpetual Help until July 1, when he moved to St. John the Evangelist, Severna Park; and Ally Ascosi and Dianne Davis of ChristLife.

In the Archdiocese of Baltimore, Ascosi estimates that about 10 parishes are currently using the program “year after year to reach more people.” Over the last decade, he said, more than 50 or 60 parishes in the archdiocese have offered ChristLife courses.

“We are continuing to move outward and to help Catholic churches incarnate the mission of evangelization in very practical ways,” Ascosi said. “ChristLife gives parish leaders the opportunity to move from maintenance to mission.”

Nodar delivered the opening keynote talk, which focused on going beyond the rhetoric of evangelization and examining what it takes to make missionary disciples, recognizing the many challenges Catholics face today.

“I want to present things that are logical and true to what the church teaches,” Nodar said afterward. “It calls for real conversion in our thinking. We’re in such a time of flux, and it is having a cultural impact on parishioners. We recognize people are going to be in a variety of places so we want to establish very clearly what the church has been teaching since Vatican II.”

Nodar believes that his program provides that model for Catholics around the world.

“The founder of our church, the Lord himself, taught us to (evangelize),” said Nodar. “And the church since Vatican II has said, ‘Yes, you need to do this.’ We want to bring people together and say, ‘Yeah, this is what the church wants you to do, and here are some practical ways to do it.'”

Many attendees nodded in agreement with Nodar, yet realize that it’s not always easy for lifelong Catholics to embrace evangelization.

“We’re recognizing what the pope is asking us to do and becoming more mission-oriented, which means something different than what the cradle Catholics were accustomed to and understood,” said Bedek. “But this is where we need to head. This is the skill set we need to start developing and helping people journey to fulfill a different mission than what we were really comfortable with before.”

Penny Rice, who joined Bedek in the journey from Ontario, is a lifelong Catholic who was encouraged to attend by her pastor.

“There is a gap between people who are 100 percent into evangelization, know the road, know the path they need to take, and us cradle Catholics who are not used to expressing our love of Jesus and being vocal and being obvious that we are Catholics,” Rice said. “We pray in silence, we worship in silence, so we need to bring cradle Catholics along to know that there is a security in loving Jesus, and they can show that.”

Peggy Clegg, who attends Little Flower Catholic Church in Indianapolis, is excited to evangelize to an entirely different population of non-Catholics.

“We have a school that’s 50 percent non-Catholic, and we have a host of people there that we could evangelize to,” Clegg said. “I’m hoping to find ways to get the parents in the school to learn more about the Catholic faith.”

Ascosi sees ChristLife as the answer to the various challenges the attendees face in their home parishes and communities.

“More and more parishes are thinking about evangelization,” he said, “because they are facing challenging realities such as aging populations, parish mergers and an increasingly secular culture. ChristLife is providing a Christ-centered, relational process to evangelize adults.”

VanWestervelt writes for the Catholic Review, the news outlet of the Archdiocese of Baltimore.

NEXT: Chicago Public Schools urged to take lesson from Catholic action on abuse