Colorado retreat, trail made famous by pope during WYD ’93 gets makeover 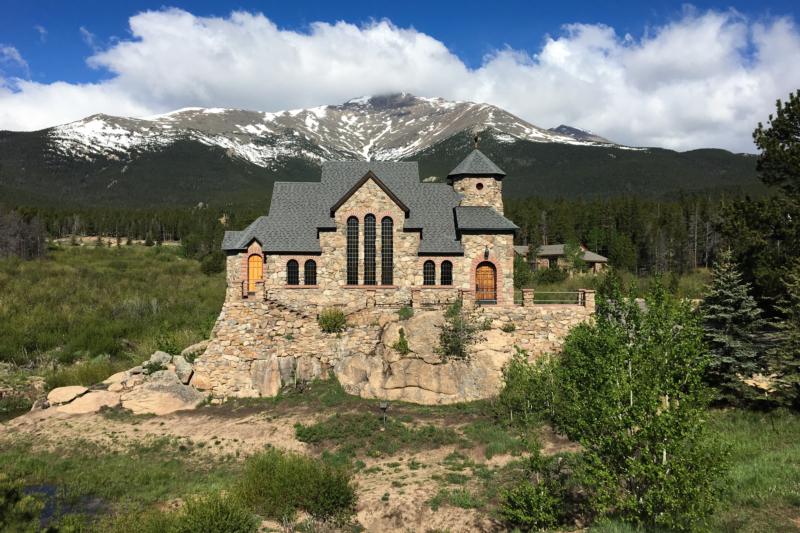 The Chapel on the Rock, formally named St. Catherine of Siena Chapel, is seen June 19, 2019, in Allenspark, Colo., near Estes Park. The chapel is on the grounds of the Camp St. Malo Retreat Center, which was made famous during St. John Paul II’s epic World Youth Day visit to the Denver in 1993. (CNS photo/Tom Tracy)

ALLENSPARK, Colo. (CNS) — Mountains don’t really change that much in 26 years. So it’s a fair bet that the view of Mount Meeker and its twin, Longs Peak, from the Camp St. Malo Retreat is the same one St. John Paul II saw when he strolled the camp’s grounds in 1993.

The retreat center was made famous during the pope’s epic World Youth Day visit to Denver, considered a huge success for the Catholic Church in the U.S. and for the pontiff.

Situated on the northern Front Range of the Rocky Mountains and just south of the town of Estes Park — the gateway to Rocky Mountain National Park — Camp St. Malo is home to a picturesque 1930s-era Chapel on the Rock. Its formal name is St. Catherine of Siena Chapel.

When he asked to have a day or two of rest during that historic visit, the pope was escorted to this mountain site by then-Denver Archbishop J. Francis Stafford. The future saint then blessed the chapel, walked the trails and took a siesta in the former conference center facility.

In 2011, a fire destroyed the retreat facility. The Denver Archdiocese later bought a church lodge down the road and created the Annunciation Heights facility for families and youth. It opened last year.

But the rustic trails and rosary walk that St. John Paul would have experienced have remained closed to the public following devastating floods and landslides in September 2013. Although heavy rains caused an estimated $1.2 billion in damages statewide, they left the popular chapel mostly intact.

The Denver Archdiocese is now in the process of restoring the St. John Paul hiking trail and a new memorial pavilion named in his honor, along with a refurbished rosary walk and outdoors stations of the cross.

A new Visitor and Heritage Center is already open and features a number of exhibits celebrating the ’93 papal visit, including a display of St. John Paul’s walking stick, which was reportedly crafted for him by a member of the U.S. Secret Service.

On a sunny mid-June day, when an African-born priest and chaplain to the camp was celebrating a weekly Wednesday afternoon Mass, some dozen guests and staff filled in the 100-seat facility.

Any chapel with so arresting a setting, and situated along the route to so popular a national park, is bound to attract local Catholics, wedding couples looking for a perfect church, as well as a trickle of spontaneous passersby.

“We see as few as 20 a day on the snowiest of winter days and as many as 500 a day in the busy summer months of June, July and August,” said Jim Richard. He and his wife are full-time volunteer greeters and self-described docents at the chapel.

Richard was busy welcoming Massgoers along with the just plain curious, as well as the tour bus crowds coming up to the mountains from Denver and stopping for a photo of the chapel. Though Mass is only offered regularly on Wednesdays, the chapel is now open year-round.

A motorcycle-riding couple from Wisconsin stopped to look around and Richard recounted for them a story of how, a year ago, the priest in charge blessed the motorcycles for a large group of bikers as they passed through.

“My wife and I are friends with a parish priest in Denver who recommended us to be docents six days a week. We like it, and we love what is going on here,” Richard said, pointing out some of the unique features of the chapel, including a single stained-glass window situated in the rear near the entrance.

“It was made in 1936 in Munich, Germany, by the Franz Mayer company and they are still in business,” he said.

But the chapel designers didn’t want a darkened interior characteristic of stained glass, so they chose gold-colored glass windows that bathe the interior with shifting hues of diffused sunlight throughout the day.

The chapel stones used to create the building were the remnants of 6 feet of rock originally blasted off the top of a large rocky outcrop; Italian-American craftsmen from Denver were among those who offered to help build the chapel.

Visitors are invited to climb up to the second-story loft and ring the 1,000-pound church bell, and to hike up the adjacent hill to the statue of Christ, which was installed in 1948 as a memorial following World War II.

After the Mass, Richard, his cowboy hat in hand, walked around the wooded property and pointed out some of the challenges of restoring the hiking trails following the damaging floods and mudslides.

There were hopes for creating more guest parking spaces, but the land is still slightly unstable and a decision was taken to defer that for now, he pointed out.

“We are trying to be good land stewards,” Richard said, pointing to an area of property that was reshaped by the surging flood and debris. “But we want to resurrect the old cabin creek trail, which is what Pope John Paul II hiked on, and we want to rebuild the rosary trail and add a Stations of the Cross.”

It isn’t yet clear when those projects will be completed, but there is a possibility that the St. John Paul II Memorial Hiking Trail may be ready for public use by the end of the year, Richard noted.

Tracy is a freelancer writer and photographer based in Florida; he reported on the Denver World Youth Day 1993.