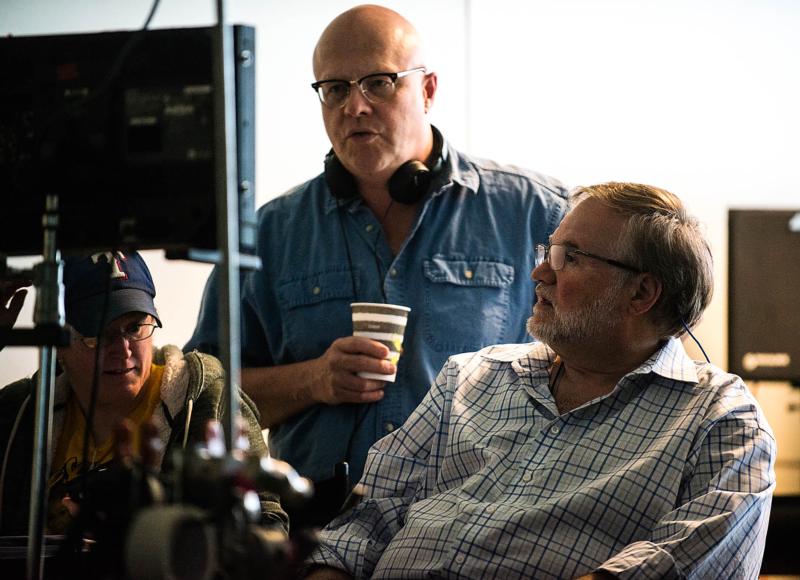 Co-writers and directors Chuck Konzelman, standing, and Cary Solomon, right, review a scene during the filming of “Unplanned,” the story of Abby Johnson, a former Planned Parenthood clinic director, and her decision to join the pro-life movement. The two men said a White House social media summit July 11, 2019, was a needed opportunity for conservatives to discuss how Facebook, Twitter and Google and other outlets are shutting out their voices. (CNS photo/courtesy Annette Biggers)

WASHINGTON (CNS) — The directors of “Unplanned,” the life-affirming, true story of a Planned Parenthood clinic director turned pro-life activist, described a White House summit on social media as a needed opportunity for conservatives to discuss how Facebook, Twitter and Google and other outlets are shutting out their voices.

Those popular online social networking services were conspicuously invitationless for the July 11 summit.

Writers and directors Cary Solomon and Chuck Konzelman, who talked to Catholic News Service ahead of the event, are the creative team behind “Unplanned.”

The movie chronicles Abby Johnson’s rejection of her role as Planned Parenthood surgical abortion clinic director after assisting in an abortion and watching on the sonogram machine, for the first time, as an abortion instrument shreds a baby into pieces.

After quitting her job immediately, Johnson worked as a pro-life activist and wrote a memoir narrating her life-changing experience, which inspired Solomon and Konzelman to create “Unplanned.”

Nothing about making the film was easy, from casting, to funding, to advertising, to screening, Hollywood and the country vehemently bucking this film’s pro-life position.

In an April Senate hearing on free speech and online censorship, Konzelman gave example after example of media bias against his film. First the Motion Picture Association of America burdened it with what the filmmakers considered an unfair R rating for two scenes: One shows the sonogram portrayal of an abortion and one shows Johnson herself taking an abortion pill and experiencing bloody hemorrhages.

The MPAA cited no other reasons for its rating decision, according to a letter Johnson released in an appeal to parents to not let the rating discourage them from taking their children to see it. This R rating meant that its previews could not be shown before non-R rated movies without special permission. That permission was denied.

Further, Google and most cable network stations refused to play ads for “Unplanned,” and Twitter temporarily suspended the movie’s account.

Now comes the White House social media summit. Along with Solomon and Konzelman, members of other conservative groups including the Heritage Foundation and Turning Point USA were expected to attend.

Solomon and Konzelman both said that this summit needed to happen to give conservative groups an opportunity to speak about the media bias they are suffering, though they didn’t know exactly what to expect from the meeting.

“I think it is an extension of back several months (being) called to testify before (Sen.) Ted Cruz subcommittee on questions of conservative thought,” Konzelman told CNS.

Currently the pair faces a similar battle to release the film in Canada. After top Canadian distributors rejected their film, they worked, alongside New Brunswick pastor BJ McKelvie to get the film into the country.

Canadian media outlets are dubbing the film “propaganda,” claiming it propagates bias and lies about abortion and abortion clinics. The Abortion Rights Coalition of Canada released a statement in opposition to the movie.

“The film’s vicious falsehoods against providers could incite hatred and violence against them, including here in Canada,” Joyce Arthur, the coalition’s executive director, said.

Meanwhile, two independent theater owners in Canada have received death threats from abortion supporters. Backlash against the film is so violent that some theaters decided to hire extra security for the film’s opening July 12, while other theaters have decided retroactively to pull the film from their offerings.

“I think it is straight out of fascism 101 playbook,” Konzelman said. “Pro-choice advocates claim we are creating a dangerous environment for abortion supporters. Meanwhile they have created death threats to the point that two theaters have pulled out of exhibition, one has hired security, one has said they won’t pick it up. … They create this controversy and blame the victim.”

However, both Solomon and Konzelman are certain that God’s providence will guide “Unplanned” and its pro-life message, not only into Canada but across the world.

Backlash in Canada is just one of the many roadblocks the directors faced in the process of creating the film. First, they had no lead actress, only to serendipitously discover their leading lady, Ashley Bratcher, five days before they were scheduled to begin shooting. Then, they ran out of money. They needed another million dollars to complete the movie, and they needed it soon, or the production would shut down.

“At 4:30 on Friday, we are sweating, all the people are coming in screaming, ‘What are we going to do?’ We had put every dollar we had into this,” Solomon said. “A couple minutes later, the phone rings a voice on the other end says, ‘Give me your routing number’ and I’m like ‘that’s an unusual request.’ Then he said, ‘I am flying over in a jet, and Kendra’ — that was his girlfriend — ‘and I have been praying to Jesus. Four times and he told us to give you a million dollars.’ Then I’m watching my screen and my screen went from 13.71 to $1,000,013.71.”

So this latest hurdle is just that; something that, with God’s help, they will eventually overcome.

“When you see miraculous healing and profound doors being opened. God wants to end abortion,” Solomon said. “We are seeing an end to it. This is the beginning of the end for the devil and his grinding machine who slaughters children. This is God doing a divine act of mercy.”

Despite the public outcry against the film, “Unplanned” has a staunch base of pro-life supporters. It has enjoyed success at the box office, grossing $18.8 million total, with $6.4 million during its opening weekend. It was the No. 4 movie in the box office that weekend. Now, with its upcoming DVD release Aug. 13, it already tops the Amazon best-seller list in preorders alone.

“The Lord is doing mighty work here. The forces against us are trying to prevent that mighty work. People should pray, fast and do penance, because this message needs to get out,” Solomon said. “People will be accorded blessings for fighting this fight and we ask everyone out there to continue to pray. We are taking this out to the nations and we need help.”

NEXT: Archbishop Kurtz to begin three months of treatment for cancer