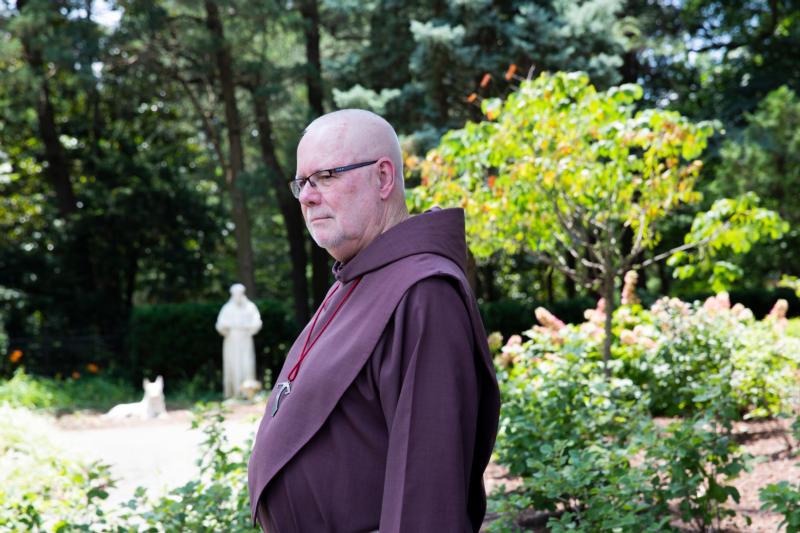 Franciscan Father Jim Gardiner, director of special projects at the Franciscan Monastery of the Holy Land in America, spends time in the monastery garden in Washington June 27, 2019. The Franciscans are commemorating the 800th anniversary of the encounter between St. Francis and Sultan Al-Malik Al-Kamil. (CNS photo/Sydney Clark)

WASHINGTON (CNS) — Deep inside layers and layers of heavy, cool stone lies a small chamber, about 6 feet by 3 feet, illuminated by the scarlet glow of hanging candles. Carved out of one jagged chamber wall, an unassuming bench stands empty. This is the tomb of Jesus Christ.

Zooming out and up 100 feet, one finds oneself overlooking, not the city of Jerusalem, but a tiny postage stamp of Middle Eastern horticulture and architecture in the great gray and white sea of Washington. This is the Franciscan Monastery of the Holy Land in America.

This monastery, built in 1898 by two Holy Land Franciscans, features scaled replicas of the Tomb of Jesus, the Tomb of Mary, the Chapel of the Ascension, the Lourdes Grotto, the Anointing Stone, Calvary, the Gethsemane Grotto, and others. Hemmed with a terracotta-red pergola, the courtyard and sprawling secret gardens burst with blooms or every shade, their slender green arms beckoning visitors to explore its hidden chapels, icons and statues, and to discover the disarming allure of the Holy Land.

Father James Gardiner, a Franciscan Friar of the Atonement, who is director of special projects at the monastery, said the gardens and the replicas are meant to “whet your appetite” for seeing the real things in the Holy Land.

“When people come here, they can get to experience how you’re going to have to scrunch down to get into the tomb of Jesus, how only a couple of people can actually fit in there,” Father Gardiner told Catholic News Service. “The things are to scale, so they can see the distance from the tomb and the anointing stone to Calvary, they can climb those stairs and see how high it is to get to Calvary if you were in the Holy Land. Things like that, that give people a real time experience of being over in the Holy Land.”

To fulfill their vocation, the friars aim to inspire Catholics to make a pilgrimage to the Holy Land for real, and then to facilitate that journey. The monastery offers opportunities for pilgrimages monthly, each of which is completely organized and scheduled by the monastery, from hotel reservations to meals to itinerary.

“We do everything for you except say your prayers,” Father Gardiner joked.

The friar tried to explain the experience and value of visiting the Holy Land.

“Something just happens to you,” he said. “I’ll tell you this. I have yet to meet anyone on any pilgrimages that ever been on who haven’t said as we are at the airport leaving how they hated to leave. They never say they had a good time, you know, they say, ‘I really hate to leave. Something’s happened. Something has changed in some way.'”

The Franciscan’s particular association with the Holy Land began when St. Francis embarked on his own pilgrimage to there in A.D. 1219. According to historian Franciscan Father Michael F. Cusato, St. Francis was determined to make contact with the Muslim people.

“Francis’s intention, first and foremost, was to go and live as a brother among other peoples,” Father Cusato said. “His insight, from the spirit in the scriptures, was that he was a creature among other creatures that every living breathing human person is a creature fashioned from the hand of God.”

After two failed attempts, Francis succeeded in reaching the Holy Land where he was met with the violence of the Fifth Crusade. In the midst of the blood and the hate, Francis and Islamic Sultan al-Kamil spent eight day in peaceful and respectful exchange of ideas within the sultan’s tent.

This year, the monastery celebrates the 800 anniversary of that fateful meeting that first brought Francis to the Holy Land and that witnessed some of the first peaceful interaction between the two faiths.

A reserved historian, Father Cusato is less gung-ho about hopping on a plane to Jerusalem than his brother priest, Father Gardiner, who is currently preparing to embark on his fifth journey of this year. Father Cusato explained that for people who can’t or won’t journey to the Holy Land, the monastery can be a spiritual refuge.

“I think it is important to enter into the spirit of Jerusalem, the spirit of the holy places, to walk in the footsteps of Jesus, not as if you are in the Holy Land yourself although that is a very viable option today … but it’s important to walk and enter into the spirit of Jerusalem, the various holy places the events that took place there,” Father Cusato said. “And you can do that here on the grounds of the monastery both within the church and the wider grounds.”

NEXT: Smithsonian inquiring about drawings made by children at Catholic center