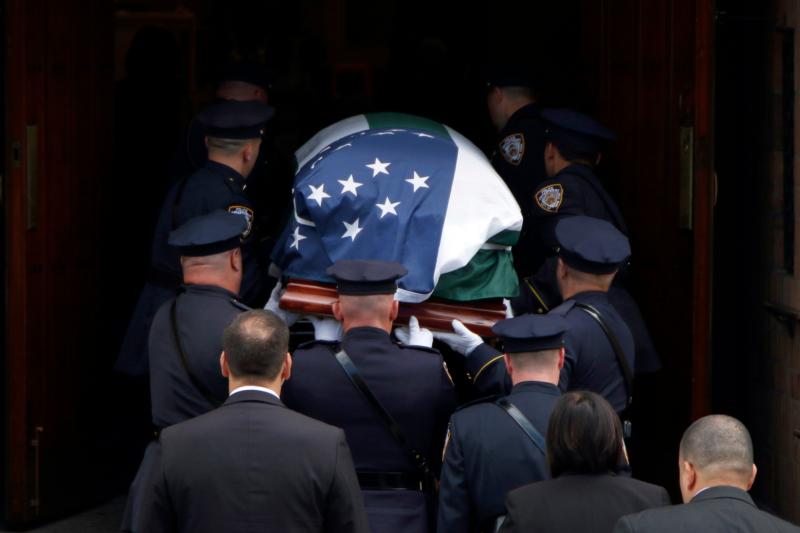 The casket of retired NYPD detective Luis Alvarez, a 9/11 victims advocate, is carried into Immaculate Conception Church in Astoria, N.Y., prior to his funeral Mass July 3, 2019. Alvarez, a 9/11 first responder, died June 29 from cancer linked to his work at the New York World Trade Center site. Shortly before his death, Alvarez, 53, pleaded with Congress to extend health benefits for first responders involved in the rescue and recovery efforts following the 2001 terrorist attacks. (CNS photo/Gregory A. Shemitz)

ASTORIA, N.Y. (CNS) — Family, friends and hundreds of service members in uniform remembered the heroism and self-sacrifice of Luis Alvarez during an emotional funeral Mass for him at Immaculate Conception Church in Astoria in New York City borough of Queens.

Alvarez, 53, was one of many New York police detectives and first responders on the scene after the terrorist attacks at the World Trade Center on 9/11. He died June 29 after a three-year battle with colon cancer, reportedly linked to the three months he spent working at ground zero.

He is the 222nd NYPD member to die after working in the lethal wreckage, known as “the Pile.”

Alvarez’s father served as a deacon of the Brooklyn Diocese, working at the parish for many years.

At the funeral Mass, the Gospel reading from Matthew echoed the heart of service demonstrated by Alvarez: “Whatever you did for one of these least brothers of mine, you did for me.”

“We are asked in faith, dear brothers and sisters, to do something very simple … you may have captured a sense of his dedication to the call, the body of the Marines and the police department, sustained by his loving family all through the years,” the principal celebrant, Father John Harrington, said in his homily.

Auxiliary Bishop Paul R. Sanchez of Brooklyn, who attended the funeral Mass, said Alvarez “showed a profession that required courage and fortitude” and noted that the had “served in a distinguished manner, and continued a battle fighting cancer until the end.”

“It was a beautiful event that brought us together and affirmed values that we all embrace — fortitude, selflessness, self-sacrifice,” he added.

Alvarez appeared before Congress in June, alongside other first responders and service members pushing for the September 11th Victims Compensation Fund, a federally funded program that compensates victims of the 9/11 terrorist attacks. Congress last authorized funding for the program in 2015 for use until 2020, but that money is running out.

In his testimony, Alvarez said, “I should not be here today, but you made me come. You made me come, because I will not stand by and watch my friends with cancer from 9/11 like me are valued less than anyone else is because of when they get sick or die.”

Under the current bill, which cleared before the House Judiciary on June 12, Congress would approve an unspecified amount of funding for the program until 2090. The bill now awaits a vote before the full House of Representatives. If passed by the House, it will go to the U.S. Senate for a vote and eventually to President Donald Trump for his signature.

According to Dr. Michael Crane at New York’s Mount Sinai Hospital, 10,000 first responders and victims have been diagnosed with 9/11-related cancer and at least 2,000 deaths have also been attributed to 9/11-related illnesses and disease.

“We pray that Congress and Senate heard his message and that he will have died a happy man for his efforts” for this fund, said Phillip Alvarez, brother of Luis Alvarez, at a July 2 news conference. “I will guarantee that if we need to go down there again, I will go.”

“Despite 69 rounds of chemo, he continued to fight and continued to use what voice he could to get his message across,” said David Alvarez, Luis’s oldest son.

In an emotional eulogy, David recalled fond memories of his father saying he learned so much from him, especially “that being a man can mean many things, but above all, it means taking responsibility for your words and actions. Your word is your bond.”

“I love you, Dad. I promise to keep walking on the brave side of the line,” he said.

Alvarez was born in 1965 in Cuba. Fleeing communism, his family immigrated to New York. He graduated from Msgr. McClancy Memorial High School in East Elmhurst, and later studied at the City University of New York. Soon after graduating, he enrolled in the U.S. Marine Corps and later joined the NYPD in 1990.

His service included volunteering in the bomb squad and working as an undercover detective for both the NYPD and the U.S. Department of Homeland Security. After 21 years, he retired in 2010 due to illnesses.

“He really was the perfect conviction of the American dream,” said NYPD Commissioner James O’Neill. “A shining example of New York’s great diversity, as well as the extraordinary call to service.”

New York Mayor Bill de Blasio tweeted July 1: “The city can never repay its debt to Detective Lou Alvarez. It will be my honor to award him with a posthumous Key to the City as a symbol of our profound respect and gratitude for his service and sacrifice.”

Alvarez had asked the Immaculate Conception Parish community that during his funeral, the public remember the victims of 9/11, as well as all fallen police officers and service members.

“We faced each day with the faith that God never sends a cross too heavy to bear,” said his sister, Aida Lugo, during her eulogy. “Luis took on that cross in a way that so few do — with tenacity and resilience.”

Alvarez is survived by his parents and siblings; his wife, Lainie; and three sons; David, Tyler and Benjamin.

Escobar is a staff reporter and Drooby is a freelancer for The Tablet, newspaper of the Diocese of Brooklyn.

NEXT: With miracle confirmed in Sheen cause, plans for beatification can begin