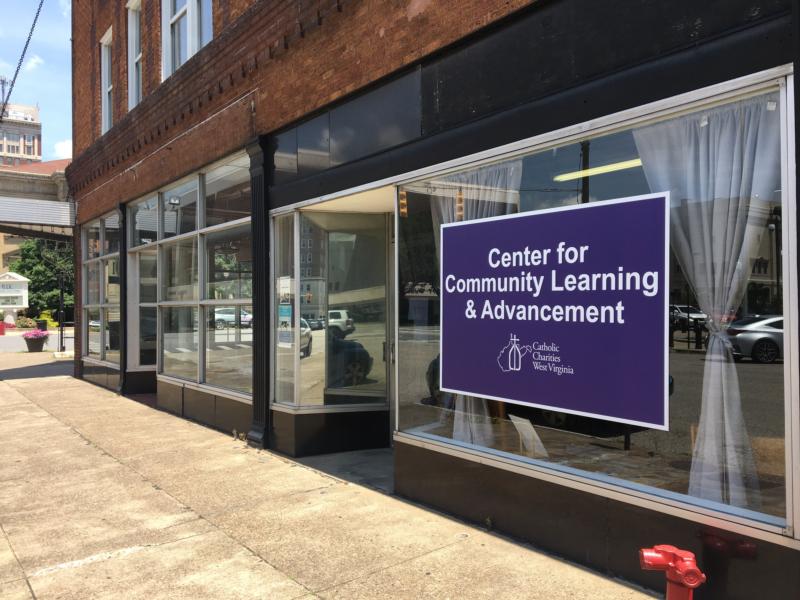 Catholic Charities West Virginia’s Center for Community Learning and Advancement office is seen in downtown Huntington, W.Va., June 27, 2019. Many people suffering from opioid addiction have been referred to the center. (CNS photo/Colleen Rowan, The Catholic Spirit)

WHEELING, W.Va. (CNS) — West Virginia leads the nation in drug overdose death rates. With an average of 57.8 deaths per 100,000 residents, the state’s drug fatality rate was nearly three times higher than the national average of 21.7 deaths.

The numbers were released in mid-June through a study conducted by the Commonwealth Fund, covering the year 2017.

The crisis has been devastating for the state, and Baltimore Archbishop William E. Lori, as apostolic administrator of the Diocese of Wheeling-Charleston, said the Catholic Church in West Virginia is committed to helping those suffering.

“Through the work of Catholic Charities, the Catholic Church in West Virginia has made a commitment to helping those who have been impacted by drug addiction, most especially the children and other family members of those suffering from drug addiction,” the archbishop said.

“Many parishes also have programs and efforts in place to address this crisis,” he added. “My office has been in discussions with the state Department of Health and Human Resources and with our ecumenical partners through the council of churches to determine how the diocese can further help in the statewide effort to address the root causes and impact of drug addiction throughout West Virginia.”

The crisis has reached all corners of the state, leaving very few untouched. “It’s just sad,” said Sara Lindsay, chief program officer for Catholic Charities West Virginia. “It’s hard to know any person who has not had experience with the opioid crisis.”

Based in Wheeling, Lindsay recently traveled four hours south to Huntington in Cabell County to attend a regional health summit which touched upon the state’s opioid crisis.

“It’s horrible in Huntington,” she told The Catholic Spirit, the diocesan newspaper. “In Cabell County, there are 178 overdose deaths per 100,000 people. … Is that not staggering?”

She learned of the grim numbers at the health summit she attended at Cabell Huntington Hospital, which provided the findings based upon research from 2017. The summit looked at the root causes of the epidemic — especially poverty.

“From the Catholic Charities standpoint, we aim to address the opioid crisis on both ends of the spectrum,” Lindsay said. “From a preventative standpoint, we’re there to fill gaps and (meet) basic needs for people that are currently in the cycle of substance use, but also for their family members. It really affects the whole family. … We see people coming to us that have suffered greatly.

“On the other end of the spectrum,” she said, “being a safety net for folks when they do fall back, when they relapse into substance abuse — we’re there to help, to provide case management services and help them get back on track.”

Case management helps individuals or families develop healthy interdependence and stability, and works with them to set goals toward improving their physical, emotional, and social well-being, program officials said.

Catholic Charities West Virginia operates career readiness services at its Community Center for Learning and Advancement in Huntington, and found a distressing trend among applicants.

“Sixty-nine percent of the people who are in our learning program reported a history of substance use in the past on their applications for our services, and then 46 percent of those individuals report long-term substance use as being a problem,” Lindsay said.

Because of this, Catholic Charities is working on expanding its career readiness services in Huntington, Lindsay said, to work with substance use and mental health treatment providers in the city to serve their clients through its education and training services program.

Emily Robinson, western regional director for the agency in Charleston, said the Community Center for Learning and Advancement, or CCLA, works closely with the addiction recovery organizations in Huntington.

“This is an important relationship,” she said, “because many in the addiction recovery community have barriers to enrolling in post-secondary education or entry into the workforce. The staff of the CCLA can address all these barriers through providing academic instruction, career readiness certifications, and advising. The CCLA provides an important step in aiding people working through recovery.”

One individual, she said, enrolled in the learning center after receiving a referral from Cabell County Drug Court. The person was in recovery from active substance addiction and needed assistance with increasing her work readiness skills, strengthening her resume and finding a job.

“During her time at the CCLA, she was able to take full advantage of the career certifications the program offers at no charge to the learner,” Robinson said. “She earned customer service, hospitality, and computer literacy certifications. She also worked with staff to create a professional resume and attended several job fairs. She has since landed a position with a local employer and now, having accomplished all her goals, has completed her work at the CCLA.”

The Catholic agency also recently wrapped up a conference series on the substance abuse epidemic through its Parish Social Ministry program. Sessions were held at four locations around the state and focused on how substance abuse it affects the brain and discussed healing in communities, reducing stigma, as well as showcasing different ways that communities have come together to respond to the crisis.

“The goals of the conference series were to help people learn about the opioid crisis and spark their imaginations as they consider moving forward,” she told The Catholic Spirit. “I think we accomplished those goals. However, there’s still more work to do.

“Although this is a nationwide problem, the solution requires nothing less than local relationships and responses. We hope that people who attended the conference are passing the information along and taking action locally.”

Jesuit Father Brian O’Donnell, executive director of the diocese’s Department of Social Ministries, said the sponsors will be looking into the possibility of more conferences in parts of the state that were not close to the previous sites. He said there are ways the faith community can be of aid for those impacted by the opioid crisis and, through the conference series, many links were created among those attending.

“I judge folks emerged from conferences knowing that substance use abuse really is the result of brain changes due to using drugs, that there are ways of aiding those raising children whose parents have been taken out of their lives by drug usage, and that there are models of counseling which have been showing good results,” he said.

In February, Catholic Charities West Virginia expanded its case management services in Wheeling to offer a new Relatives as Parents program to help meet the needs of caregivers and the children they are raising.

Thousands of children in West Virginia are currently being raised by relatives other than their biological parents, program officials said. Census data shows that this number is on the rise, and many cases are linked to drug addiction.

PREVIOUS: With miracle confirmed in Sheen cause, plans for beatification can begin

NEXT: Small West Virginia town of Kermit is where U.S. opioid crisis began