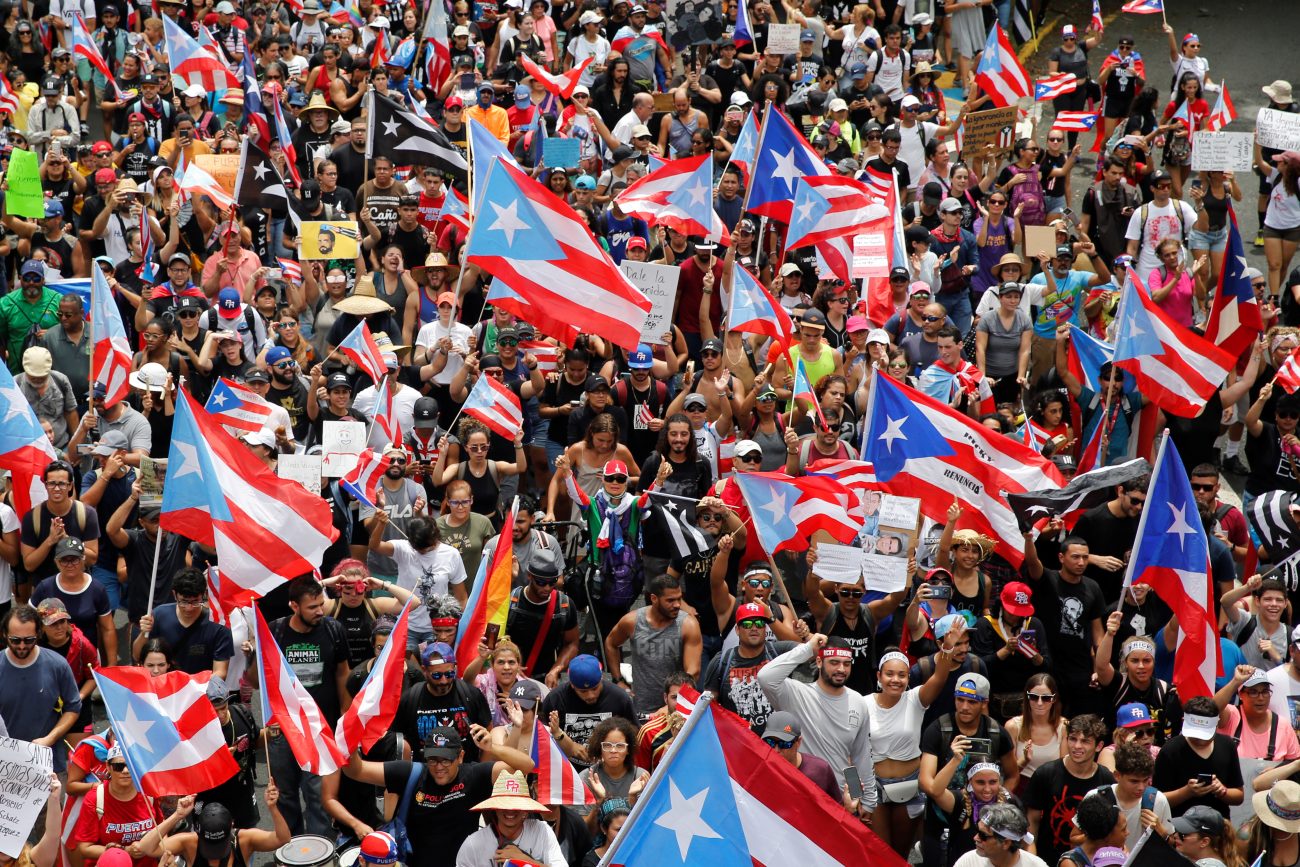 People join a rally to celebrate the resignation of Puerto Rican Gov. Ricardo Rossello in San Juan July 25, 2019. The Puerto Rican bishops said July 24 that in the wake of the historic resignation island residents must continue to maintain their unity to overcome the social ills that led to the political and economic crisis. (CNS photo/Marco Bello, Reuters)

In the wake of the historic resignation of Puerto Rican Governor Ricardo Rossello, the people of the Caribbean island must continue to maintain their unity to overcome the social ills that led to the crisis, the Puerto Rican bishops’ conference said.

In a statement signed by Bishop Ruben Gonzalez Medina of Ponce, president of the bishops’ conference and Bishop Eusebio Ramos Morales of Caguas, secretary of the conference, the bishops called on Puerto Ricans to “maintain the serenity and democratic balance that this period of government transition deserves.”

“Let us make this a great opportunity to unite as a people and work together, without flags and parties, in the search for the common good to overcome the fiscal crisis, corruption, violence and other evils,” the July 25 statement said.

Rossello resigned July 24 following the revelation of nearly 900 pages of private chats between the governor and his staff in which they made light of the victims of the 2017 hurricane as well as several violent, homophobic and misogynistic remarks aimed at political and public figures.

After nearly two weeks of massive protests outside “La Fortaleza,” the governor’s residence, Rossello acknowledged that remaining as governor “would endanger the successes we have achieved” and formally announced his resignation.

The Puerto Rican bishops said that following the governor’s decision to step down, it is now “time to rebuild the country as a democratic country, combining the will to develop new government policies that help the integral development of the person.”

“Every citizen, no matter the color, creed, sex or political party, must give the best of themselves, to start a new phase of life in the history of this people,” the statement said. “Nobody must remain with their arms crossed, because, united, a better Puerto Rico is possible!”

The bishops’ conference also prayed for Rossello “in this new stage in his life” as well as for those who will take up the reins of leading the government so that they may “take up their duty with greater passion and dedication in true service to others.”

“May the Holy Spirit guide our steps so that the experience lived these past few days help us to become, more and more, a better society where peace, justice and fraternal harmony shines,” the bishops said.

NEXT: Wimbledon champ carried gift from confirmation sponsor to each match