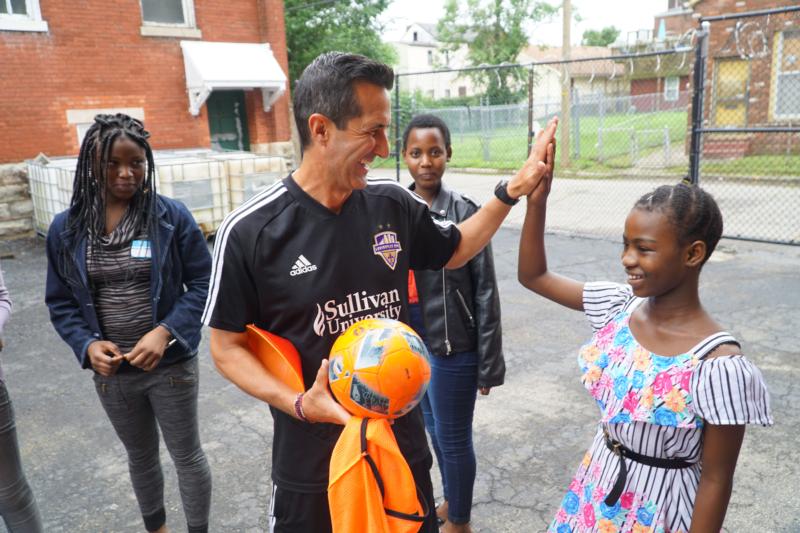 Mario Sanchez, one of the coaches for the Louisville City Football Club in Kentucky, high-fives Lwize Asandja, a young girl from Tanzania, during a soccer clinic at Catholic Charities’ St. Anthony Campus June 17, 2019. Benedicte Mangaza of Uganda and Ishala Muhawenimana of Rwanda, look on. (CNS photo/Ruby Thomas, The Record)

LOUISVILLE, Ky. (CNS) — Once resettled in the United States refugee youth are free to pursue happiness, and sometimes it’s the simplest kind that can make a difference.

Through a new partnership between Catholic Charities in the Archdiocese of Louisville and the Louisville City Football Club — a professional soccer club — refugee youth are finding joy in a familiar past time.

The club also is donating 100 tickets to Catholic Charities staff, refugee families and mentors so they can attend two games this summer.

Shaali Singogo, who works with the young people, said many of the kids have experienced “unimaginable” circumstances, so something like the soccer clinic is a welcomed change.

“They’re in a new country and soccer is one thing that’s familiar to them,” said Singogo, the youth services coordinator for the Office of Migration and Refugee Services.

“It’s a lot to process and it can be stressful,” Singogo told The Record, Louisville’s archdiocesan newspaper. Playing soccer, he said, is good for them. “They get to connect with their peers. They get to laugh. It’s good for their health.”

“We’re excited to be able to start this and see where it goes,” Hauber said in a recent interview. Catholic Charities was lucky to have the Louisville City Football Club reach out to propose this partnership, she noted.

“Soccer is a universal sport and it brings people together no matter what language they speak,” said Hauber. “It provides happiness and camaraderie.” When people are on the soccer field their nationality is not that important, it’s more about coming together, said Hauber, adding that’s something the world needs.

The Louisville City Football Club wants to partner with organizations that unite people, said Mario Sanchez, director of youth development and community relations for the club.

“Soccer is a sport that unites and it’s the goal of Louisville City Football Club to bring communities together through the sport,” said Sanchez, who also is one of the team’s coaches. “We wanted to partner with an organization with the same goal. It’s a natural fit for both organizations to work together.”

Sanchez led the first clinic June 17 for close to three dozen kids. Though most of the kids didn’t speak or understand English, the language barrier didn’t matter once they started kicking a soccer ball back and forth. Big smiles, hugs and high-fives seemed to say it all.

“They can feel lost here, but if you throw a soccer ball in front of them they feel like they’re at home again,” said Sanchez. “I’d like to believe that it (the soccer clinics) will make them feel a part of this community,” said Sanchez.