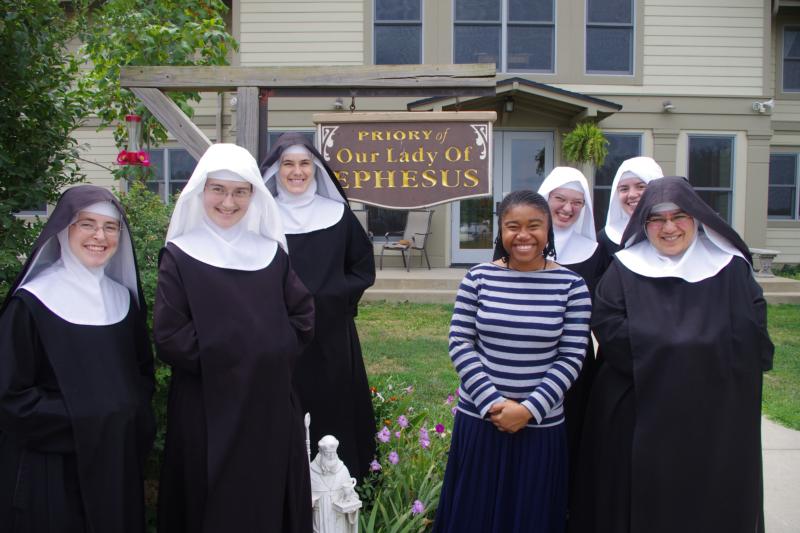 Norvilia Etienne, a graduate of Queens College in New York City, center, poses in July 2018 with members of the Benedictines of Mary, Queen of Apostles, outside Our Lady of Ephesus in Gower, Mo. Etienne petitioned to enter the religious community and after she visited the priory she felt at peace and knew this was where God was calling her. To offset her student loans that would inhibit her acceptance into the order, Etienne started fundraising with the Laboure Society, a nonprofit that helps those who want to join religious life or the priesthood by raising funds to pay off their loans. After completing the program, she is set to enter as a novice in the fall of 2019. (CNS photo/courtesy Benedictines of Mary, Queen of Apostles)

FRESH MEADOWS, N.Y. (CNS) — “Yes, there is a vocation crisis, but we have to realize student loans are a substantial inhibitor to our vocations and the people wanting to give their lives,” said Norvilia Etienne, a recent New York City college graduate.

In 2018, the parishioner from Holy Family Church in Fresh Meadows petitioned to enter the religious community of the Benedictines of Mary, Queen of Apostles. After evaluation, she was accepted into the order. Except there was one catch — she must be free from any financial debt, including student loans, before she could enter as a candidate.

“I want people to know that it is a problem, first of all,” Etienne told The Tablet, newspaper of the Diocese of Brooklyn. “It’s a problem and it’s affecting a lot of people who are wanting to become religious.”

A 2012 study conducted by the Center for Applied Research in the Apostolate for the National Religious Vocation Conference found that while most religious institutes have a written policy or accepted practice on educational debt, 70% of the religious communities where more than three candidates had educational debt reported turning someone away. In the same study, 80% of those communities asked potential candidates to delay their application because of debt.

Not all religious institutes have the capacity to take on the educational debt of candidates and according to the same study, some assume the debt and pay it off over time or ask candidates to defer their loans. A small number pay interest on the student loans until the member professes perpetual vows.

Before Etienne could graduate from Queens College, the unpaid debt from her undergraduate degree would pose a potential roadblock to joining religious life. So her Benedictine sisters introduced her to the Laboure Society, a nonprofit that helps people who want to join religious life or the priesthood by raising funds to pay off their loans.

Sitting inside a booth at a Fresh Meadows diner, she displayed characteristics most students portray during summer break — easy-going, calm and hungry for adventure. Her laugh was infectious as she dived her fork into a vegetarian omelet as big as the hat on her head.

The price tag comes from a fundraising pool that averages the amount each candidate must strive to reach even if they owe more or less money. Etienne was one student in a class of 17 whom their diocese or religious community has accepted, but who lack the financial freedom to enter. With assistance from the Laboure Society, their donations will be doled out among the class and applied to students’ loans over a set time period.

In an email to The Tablet, Maritza Sanchez , Laboure’s director of admissions, stated that their organization assisted candidates from a variety of backgrounds including doctors, nurses, nurse practitioners, lawyers, teachers, therapists and even artists.

One wonders what goes through the mind of a college student who not only has her final year of studies to undergo, but on top of that, must raise thousands of dollars to join an order of singing, and Billboard chart-topping, Benedictine nuns?

Every time the waitress stopped by Etienne’s table, her manners were evident with every “thank you” and “please” peppered in between her big smile. One would never guess that hidden deep within that lively, confident young woman was a desire to dedicate her entire life to Jesus Christ as a cloistered nun — praying in particular for more vocations to the priesthood.

“I kind of want my life not to make sense if there isn’t a God, so the only way my life could make sense, is that there is a God,” she explained. “To be honest, I didn’t know that before, but the cloistered life makes no sense if there is no God. It doesn’t. It just doesn’t. That’s the truth. It’s the fact of the matter.”

It wasn’t as easy as pie for Etienne to say “yes” to living a life secluded from the outside world. She originally thought her bubbly personality would work well as a sister working in the trenches of a specific community. For months, she spent countless hours watching different nun videos on YouTube during her quest to find the congregation that would be a good fit.

Whether it was divine intervention, or inspiration from one of her favorite saints and also a cloistered nun, St. Therese of Lisieux, Etienne finally narrowed her selection and came across the Benedictines of Mary, Queen of Apostles. When she visited their motherhouse outside of Kansas City, Missouri, a sense of peace overcame her. That’s when she knew it was home.

But her vocation to the religious life was not a straight path. When she first came to New York, she was a teenager and a cradle Catholic immigrant from the Caribbean island of St. Lucia. At that point, she recalled that faith felt burdensome. Her grandmother prayed for nearly 40 years that someone in her family would join religious life. Etienne couldn’t empathize. She went to Mass every Sunday out of duty, not a personal relationship with God.

Meanwhile, she excelled in the classroom. Despite achieving academic success in college, she felt a deep emptiness. This irking restlessness for purpose prompted Etienne to action.

“St. John Paul II says, ‘If you want to do, you must first learn how to be,’ that is, with Jesus in the Eucharist. So adoration is very important for action,” she said.

During a young adult gathering at the Catholic Underground apostolate, she decided to pour her heart out at eucharistic adoration. It was after that personal encounter with Christ that she gained a sense of peace.

Not too long after, Etienne found herself on a pilgrimage to World Youth Day in Krakow, Poland. She experienced the sacrament of reconciliation with a cardinal who told her that the longing of her heart’s desire had a purpose and she must find that purpose.

Affirmation after affirmation confirmed she was heading in the right direction and she had a special boost thanks to the help of another special woman in her life.

More moments of clarity occurred and that’s when life got a little more interesting.

“I remember distinctly saying, ‘Oh no, my grandmother has prayed me into being a nun!”

Following the will of the Lord not only meant her discernment into religious life, but also included combating a different battle when she got back to New York. Etienne met members of Students For Life and while hesitant at first, she helped start her campus’ first pro-life group. Except the idea was met with opposition from the school — the administration didn’t approve.

“I could never imagine that I would challenge my college in starting a pro-life club. Me? No,” she said.

She sued Queens College accusing the school of discrimination for refusing to give the group official status as a campus group; school officials the group after receiving the litigation.

Even before the lawsuit, Etienne sought the guidance from another key person in her life, her spiritual director Father Christopher O’Connor, pastor, from Blessed Mary Help of Christians-St.Mary’s, in Woodside. He still plays a part in her discernment process.

Fast-forward one more year later and with the help of the Catholic Church she wants to serve, and those willing to give her a chance, this September, she will trade her cap and gown for a veil and cuculla. On the feast of Our Lady of Sorrows, she will say “yes” as Norvilia, the novice.

Enaje is a reporter and youth page editor at The Tablet, newspaper of the Diocese of Brooklyn.

PREVIOUS: Smithsonian inquiring about drawings made by children at Catholic center

NEXT: U.S. bishop among nearly 200 faith leaders speaking against war in Iran