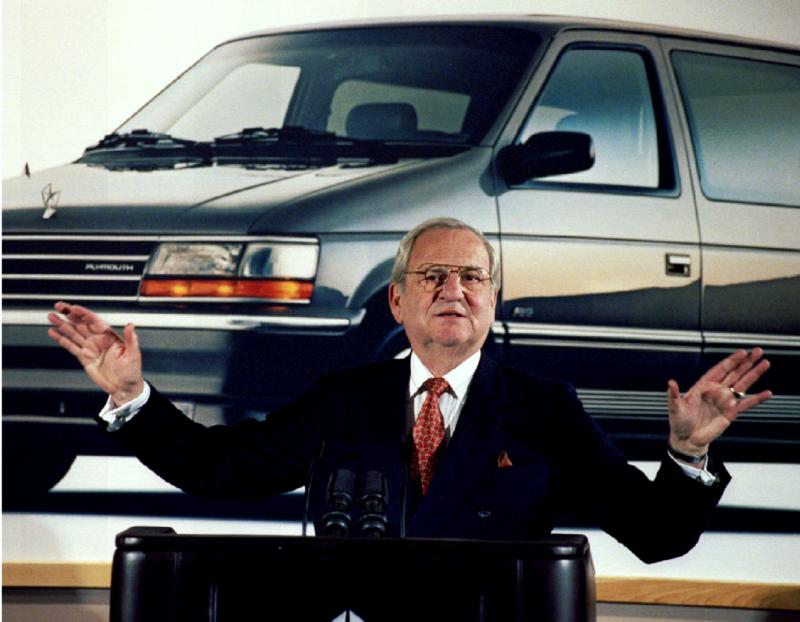 Former Chrysler CEO Lee Iacocca, who became a folk hero for rescuing the company in the ’80s, died July 2, 2019, at his his home in Bel Air, Calif. The funeral Mass for the longtime 94-year-old auto executive was celebrated July 10 at St. Hugo of the Hills Church in Bloomfield Hills, Mich. He is pictured in a 1991 photo. (CNS photo/John Hillery, pool via Reuters)

BLOOMFIELD HILLS, Mich. (CNS) — Though he achieved fame as an automobile executive and leader of a private initiative to renovate the Statue of Liberty, Lee Iacocca valued family above all else in life, said a priest who eulogized him during his funeral Mass July 10.

“For decades, Lee’s feet and hands moved mountains,” Msgr. Howard Lincoln told mourners who gathered for the Mass at St. Hugo of the Hills Church in suburban Detroit, where Iacocca was a member before retiring to California. “Lee always seemed to me to never really be down. Somehow, even at the darkest hours, I think he knew somehow even Chrysler would work out.”

Msgr. Lincoln, pastor of Sacred Heart Church in Palm Desert, California, Iacocca’s parish in his retirement years, said the business leader “knew that this life was his once in a lifetime opportunity and he wanted his life to matter.”

“He was an elevating influence for our parish. I think he saw the importance of being kind and courteous to everybody. … ‘Yes,’ he said, ‘I’ve had a wonderful and successful career but next to my family, it doesn’t matter at all,” Msgr. Lincoln recalled.

Msgr. Anthony Tocco, pastor of St. Hugo of the Hills, presided at the funeral Mass.

Iacocca died July 2 at his home in Bel Air, California, at age 94 of complications from Parkinson’s disease.

He was born Lido Anthony Iacocca Oct. 15, 1924, in Allentown, Pennsylvania, to Italian immigrants. The family operated a small hot-dog eatery, which later became a popular chain of restaurants now known as Yocco’s, a distortion of the family name. The family eventually expanded into real estate and other business interests.

His parents immigrated through Ellis Island from Italy. His father, Nicola, arrived in 1902 and his mother, Antoinette, in 1921.

During the 1980s at the height of his business career, Iacocca became one of the most widely known business leaders in the world. He was in global demand as a speaker and was eagerly sought after for television interviews because of his outspokenness and ability to command a conversation. His 1984 autobiography became an international best-seller.

His commitment to the Catholic Church was evident when he and Thomas Monaghan, founder of Domino’s Pizza, headed a fund that raised more than $720,000 to help the Archdiocese of Detroit defray the cost of $2.4 million to host St. John Paul II’s 23-hour visit in September 1987.

Iacocca’s ascendance as an automobile executive began when he joined the Ford Motor Co. in 1946 after completing a master’s degree in mechanical engineering at Princeton University. A year earlier he completed a bachelor’s degree in engineering at Lehigh University in Bethlehem, Pennsylvania, finishing coursework in eight semesters without taking summers off, graduating with honors.

He decided to enter engineering school after being rejected and classified 4F by the Army Air Force because he had rheumatic fever a couple of years earlier in high school.

Soon after joining Ford he decided he wanted to enter marketing and sales and quickly rose through the ranks of the company. By age 36, he was named vice president of truck sales for Ford Division. He became president of Ford Division in 1970.

Perhaps his most significant accomplishment for the company was the development of the sporty Mustang line of automobiles.

However, in 1978, Henry Ford II fired Iacocca for “personal” reasons. Chrysler Corp. quickly snapped up the in-demand executive. Iacocca then guided the flailing company through a difficult bankruptcy with the assistance of hundreds of millions of dollars in federal government loans, which the company paid back in full by mid-1983.

At Chrysler, he helped guide the development of the minivan.

In 1982, President Ronald Reagan asked Iacocca to lead a multimillion-dollar private campaign to renovate the Statue of Liberty and Ellis Island in time for the statue’s centennial in 1986. He accepted, saying it would be a tribute to his parents.

Iacocca’s life was jolted when Mary, his wife of 26 years, died May 15, 1983 of complications from diabetes. He called her the anchor of his private life and described her death as the “greatest personal sadness of my life.”

The couple had two daughters, Kathi and Lia.

Even before Mary Iacocca died, Iacocca advocated for better medical treatment for type 1 diabetes patients, who often face debilitating and fatal complications. He continued his advocacy after her death.

Iacocca had a second marriage annulled in 1987 and was divorced from his third wife in 1994. He was buried in Troy, Michigan.

NEXT: Father Amalfitano, beloved pastor with healing ministry, dies at 84