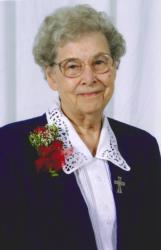 FARMINGTON HILLS, Mich. (CNS) — Mercy Sister Mary Maurita Sengelaub, a nurse who entered religious life and eventually led what is now called the Catholic Health Association of the United States, died July 6 at age 101 at McAuley Life Center, a retirement home run by her order, in the Detroit suburb of Farmington Hills.

Born Katherine Sengelaub June 28, 1918, she grew up on a farm near Reed City in western Michigan. After graduating from high school, she helped on the farm and cared for sick relatives. Her parents, however, insisted she have further education, so she enrolled in St. Mary’s School of Nursing in Grand Rapids.

Upon graduation, she became a clinical nursing supervisor and instructor of nursing at Bay City’s Mercy Hospital, run by the Sisters of Mercy. It was here that she began to seriously consider religious life. In 1945, at age 27, she entered the Sisters of Mercy novitiate in Detroit, took the name Sister Mary Maurita and was assigned to continue in health care ministry.

She earned a master’s degree in hospital administration at St. Louis University in 1953. She returned to Michigan and held several administrative positions at Mercy hospitals, including president of St. Mary’s Hospital in Grand Rapids. In 1961 she was named assistant provincial of her order’s Detroit province.

In 1965 Sister Sengelaub was elected to serve on the leadership council for the Sisters of Mercy of the Union. While in this position she became increasingly aware of the plight of migrant workers and became involved with an effort by the U.S. Department of Health, Education and Welfare — now the Department of Health and Human Services — and the Conference of Major Superiors of Women — now the Leadership Conference of Women Religious — to meet their needs.

Together, a plan was conceived to provide a broad approach for assisting migrant workers. This plan, called the East Coast Migrant Health Project, expanded to the entire United States and continues to this day under the name MHP Salud.

Sister Sengelaub had less than a year left in her term with the Mercy Sisters when she was chosen in 1970 to lead the CHA, then known as the U.S. Catholic Hospital Association. She became the first woman religious — indeed, the first woman — and the first noncleric to lead the organization.

In the early 1970s she conceived of, and, with the help of the CHA staff, implemented, a leadership development program that is credited with helping health care sponsors and executives bring stand-alone hospitals and long-term care facilities together as systems.

She also was instrumental in establishing a center for ethics research to study the implications of emerging health care technologies, an organization that was the precursor of the National Catholic Bioethics Center in Philadelphia. Sister Sengelaub encouraged CHA members to support greater health care coverage for the poor and underserved and she testified before Congress in the 1970s as it considered a national health insurance bill.

CHA today is comprised of more than 600 hospitals and 1,600 long-term care and other health facilities in all 50 states. The Catholic health ministry is the largest group of nonprofit health care providers in the nation.

Sister Sengelaub resigned as CHA president in 1977 for health reasons. After recovering, she was chosen to serve again on her religious community’s Detroit Provincial Council. She also worked with the new Sisters of Mercy Health Corp., the Migrant Workers Project and served on the Michigan Catholic Conference’s board of trustees.

In 1988, at age 70, she moved to Australia to help the Sisters of St. John of God structure that country’s first Catholic health system. She returned to the United States to work as justice coordinator for the Mercy sisters’ Detroit province 1990-95 and entered semiretirement.

“As a Sister of Mercy and throughout a six-decade-plus career in Catholic health care, Sister Maurita committed her life to serve those most in need — the poor, the sick, the dying and the elderly,” said a statement by Mercy Sister Mary Haddad, CHA’s president and chief executive officer. “Sister Maurita’s leadership of the Catholic Hospital Association strengthened the ministry during a time of great change in our church and our country.”

A funeral Mass was to be celebrated July 11 at the Mercy Center Chapel in Farmington Hills.

NEXT: Auto executive Iacocca recalled for love of family during funeral Mass