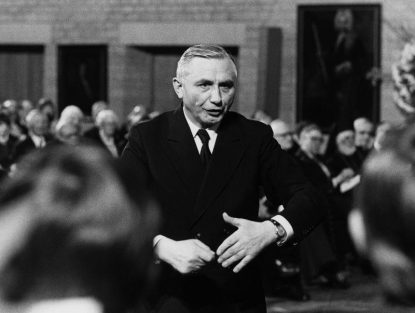 WARSAW, Poland (CNS) — A German bishop has vowed to intensify “preventive measures” after two church-sponsored reports confirmed systemic violence and abuse at his diocese’s cathedral schools between 1945 and 1995, including 30 years when their famous choir was run by Msgr. Georg Ratzinger, brother of retired Pope Benedict XVI.

“The goal (of the reports), using methods and mechanisms of social psychology, was to identify factors which encouraged these cases,” said Bishop Rudolf Voderholzer of Regensburg.

“The foremost aim now is to ensure justice and satisfaction to all those who were allowed to suffer, to demonstrate our sorrow and learn for the sake of future generations.”

The bishop spoke at the July 22 presentation of the reports into mistreatment of pupils at several schools — including two boarding schools — that trained members of the southern diocese’s prestigious Domspatzen choir, founded in the 10th century.

Bishop Voderholzer said violence and sexual abuse by priests and church staffers had represented his “most depressing experience” as a bishop and “deeply affected many people” far beyond Regensburg. He said he counted on the latest reports to spur “ever-more-effective and sustainable preventive measures.”

For years, there had been reports and knowledge of abuse at the schools, but in 2010, the incidents became more publicly known. In July 2017, the diocese released a 440-page church-commissioned report confirming that 547 choir members had suffered physical and emotional abuse over a half-century. It said 67 had suffered sexual violence, but said the real number could be closer to 700, since many victims had declined to come forward during the two-year inquiry.

In one of the new reports, two Regensburg University historians said the mistreatment of students had been facilitated by an “institutional inertia” and late utilization of more modern teaching methods, as well as a “system of silence” among church and state authorities. It said the schools and the Domspatzen choir had also suffered from a “polycratic structure” of competing responsibilities, which “limited the room for maneuver and made reform difficult,” while preventing “an unprejudiced view from outside.”

Of the 4,350 boys studying from 1945 to 1995, 12.6 percent suffered abuse, the report said, adding that the “sadistic methods” used went far beyond the corporal punishment permitted in Bavaria until 1983.

It also rejected claims by retired Pope Benedict XVI that pedophilia and sexual abuse could be linked to liberal changes in 1968; it said “significant and overwhelming violence” at the Domspatzen predated the late 1960s movement.

“There were no internal or external controls, and most of those responsible had no training — the school was ultimately important only in recruiting good voices,” the university report added.

“Violent offenders could act in the anonymous gaps of an organizational system difficult for many to understand. The funding and success of the choir was always central and more important than individual well-being or any child-friendly pedagogy.”

The other report, by Martin Rettenberger of Germany’s Criminology Center at Wiesbaden, said Father Johann Meier, who directed one of the schools from 1953 until his death in 1992, had displayed “sadism and fantasies of omnipotence.”

It agreed that abuse had been made easier by “opaque internal structures” and “an unclear distribution of responsibility,” and said the schools and choir had embodied “a closed social system which developed its own moral standards.”

The report said the record of Msgr. Ratzinger, who directed the choir from 1964 to 1994, was “ambivalent,” as he was very severe during class time and more amiable off-hours.

He was “inclined to a hot temper and exaggerated severity” and resorted to “various forms of violence,” including “hard bodily punishment and mental humiliation,” the report said.

“Strong competitive pressure was a special stress factor,” but his “outbreaks of violence were more eruptive or reactive” and not at all like the sadism displayed by Father Meier, it said.

“Moreover, Ratzinger was regarded by many as personally benevolent and described as a paternal and amiable character, who was attached to the boys and open to their concerns — once the choir rehearsals were over.”

It added that the retired pope’s brother, who denied being aware of the incidents in a 2010 German newspaper, had lacked “pedagogical knowledge,” and made “no decisive interventions” against the “disproportionate harshness” of other choir leaders.

In his statement, Bishop Voderholzer said his Regensburg Diocese had launched a “four-pillar program” against abuse in 2016, including counseling and information services for victims, and had also disbursed 3.78 million euros ($4.2 million) in “recognition payments” to 376 people.

He added that he had expressed himself “deeply guilt-ridden and full of shame” in a July 2017 pastoral letter and said his feelings were made worse by knowing “all these children were placed, in good faith, into the trust of priests and church employees under the obligation to act on behalf of Christ the good shepherd.”

The university report said abuse and “systemic failures” had been exposed at other Catholic schools in Germany, where most of the 15 state governments had banned physical punishments in the 1970s, adding that some parents had discounted complaints by their children out of “appreciation for the clergy’s authority.”

Abuse-related criminal charges were brought against 49 former Regensburg school staffers, but all were dropped under Germany’s statute of limitations.