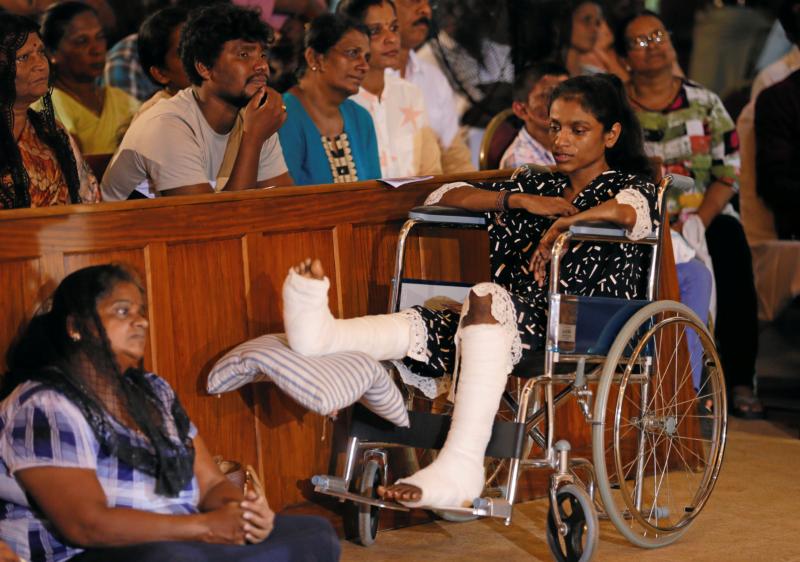 An injured woman and other worshippers pray during the reopening ceremony of St. Anthony’s Shrine in Colombo, Sri Lanka, June 12, 2019, months after it was closed because of an Easter bombing. A top British official said the government would commit itself to a robust defense of persecuted Christians following a new report into their plight. (CNS photo/Dinuka Liyanawatte, Reuters)

MANCHESTER, England (CNS) — A top British official said the government would commit itself to a robust defense of persecuted Christians following a new report into their plight.

British Foreign Secretary Jeremy Hunt said in a July 8 news conference in London that the report will lead to a “sea change in our approach” to the global persecution of Christians.

“We are working across government to agree (on) a formal collective response as soon as possible,” said Hunt, who along with Boris Johnson is one of two candidates competing to be the next U.K. prime minister.

Hunt said he commissioned Anglican Bishop Philip Mounstephen of Truro to prepare the independent report last December after learning that “almost a quarter of a billion Christians were still enduring persecution around the world.”

“The evidence shows sadly that the situation is becoming worse,” said Hunt, an Anglican. “The number of countries where Christians suffer because of their faith rose from 128 in 2015 to 144 a year later. In the Middle East, the very survival of Christianity as a living religion is in doubt.

“A century ago, 20 percent of the region’s people were Christians; today the figure is below 5 percent,” he said.

Hunt said that, as foreign secretary, he prioritized helping Rohingya Muslims, “who are targets of a brutal campaign of ethnic cleansing” by the army of Myanmar.

“But I am not convinced that our efforts on behalf of Christians have always matched the scale of the problem, or indeed have reflected the evidence that it is Christians who frequently endure the heaviest burden of persecution. Indeed, around the world, Christians are believed to be targets of about 80 percent of all acts of religious discrimination or persecution.”

He blamed the inadequate response by the U.K. on “misguided political correctness — or an instinctive reluctance to talk about religion.”

The 176-page final report recommends that Britain seeks a new U.N. Security Council Resolution to require all of the nations of the Middle East and North Africa to protect Christians and permit U.N. observers to monitor security measures.

It suggests that new linguistic terms — such as “Christophobia” — be sought to describe anti-Christian discrimination in the same way that Islamophobia and anti-Semitism are used to describe acts of violence toward Muslims and Jews.

The report says that, post-Brexit, the U.K. should establish independent national sanctions on countries where Christians are persecuted for the faith. It also says a fund should be established to help persecuted Christians and to care for those who have escaped persecution.

Foreign Office staff — at home and abroad — should also be required to undergo “mandatory training on religious literacy, subject to resources,” the report said.