Cardinal fears Iraq could be caught in middle of a U.S.-Iran conflict 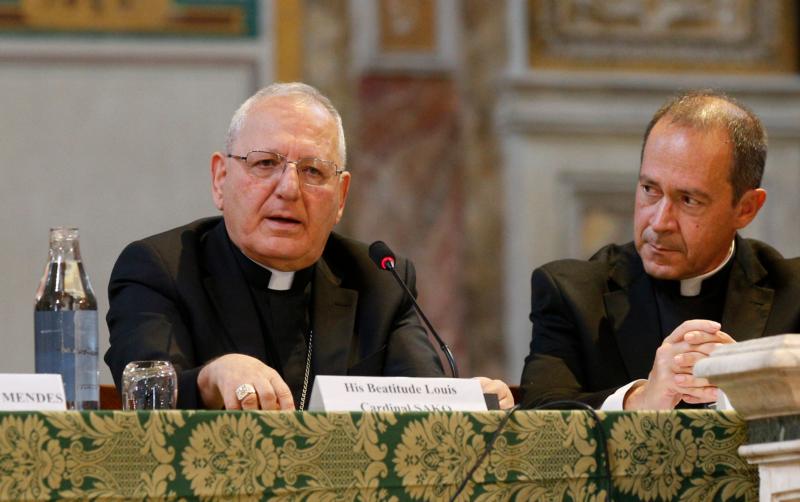 Cardinal Louis Raphael I Sako, the Chaldean Catholic patriarch, speaks during the presentation of the UK Independent Review on Persecution of Christians, in Rome July 15, 2019. Looking on is Msgr. Antoine Camilleri, an official at the Vatican Secretariat of State. (CNS photo/Paul Haring)

DOHUK, Iraq (CNS) — Chaldean Catholic Patriarch Cardinal Louis Sako is concerned by rising tensions between the United States and Iran, fearful that his country, Iraq, could be caught in the middle of any potential conflict. It has also made a proposed visit by Pope Francis to Iraq next year uncertain, he said.

In an exclusive interview with Catholic News Service in this northern Iraqi city, Cardinal Sako also said Iraq’s Christians are struggling after destruction of their ancestral lands by Islamic State militants and the current growing encroachment by Shiite militias on their towns, following years of sectarian violence convulsing Iraq.

“We are afraid when we hear people saying that there will be war and what could happen. But I hope that we will not have war and that the Iranians will consider what Iraq has experienced. After 15 years, Iraq is suffering and there is confusion,” he said. “There is no citizenship, but sectarianism in Iraq. Christians have suffered a lot.”

The cardinal spoke to Catholic News Service in Dohuk July 8, and again in Rome July 15. In Rome, he was among several speakers invited by Sally Axworthy, the British ambassador to the Holy See, to the presentation of U.K. Independent Review on Persecution of Christians at Rome’s Basilica of St. Bartholomew, a shrine to modern martyrs of the Catholic Church.

The review looked into the situation of Christians around the world, particularly in Asia, Africa and the Middle East. In Iraq, the report stated that while Islamic State has been defeated, Iranian-backed Shiite militias have taken over Christian properties seized by the Islamic State and have impeded the free movement of Christians, especially priests who are “unable to reach their churches to lead worship.”

The Christian population in Iraq numbered about 1.5 million to 2 million before the 2003 U.S.-led invasion, analysts say, and it and has now dwindled to about 200,000. Christians have been targeted by sectarian violence, driven out of their homeland of 14 centuries. Almost two-thirds of Iraqi Christians belong to the Chaldean Catholic Church.

In Dohuk, Cardinal Sako told CNS there were once-thriving Christian communities throughout Iraq: in the capital, Baghdad, in Basra to the south, as well as in Kirkuk, Mosul and Kurdistan in the north.

“Today in Mosul, there are virtually no Christians. There were more than 30,000 (before sectarian violence and Islamic State). I was a parish priest there,” he said.

“After the liberation of Mosul (from Islamic State), I went there one week afterward and saw that all of our churches have been destroyed. These churches date between the fifth to the 10th century A.D. They are no more. We are afraid that something similar will happen in Iran, but that also Iraq will be affected by a war,” he said.

The climate of uncertainty has also called into question Pope Francis’ hoped-for visit to Iraq next year.

“We don’t know how things will go. Maybe the pope is waiting. He expressed his wish to come to Iraq,” said Cardinal Sako, who sent an invitation to the pope on behalf of the Iraqi church. Both Iraq’s president and prime minister also sent Pope Francis letters of invitation.

During a meeting June 10 with a Vatican coalition of funding agencies, known by its Italian acronym ROACO, the pope said he hoped to visit Iraq in 2020.

Christians and Muslims, the cardinal told CNS in Rome, are ” expecting this visit,” which, like the pope’s visit to the United Arab Emirates in February, will be a ” phenomenal event.”

During that visit, he said, millions of Muslims watched the pope’s Mass and, “for the first time, they watched a Christian liturgy with men, women, young people and old people praying in harmony.”

“The hymns, the psalms, the songs, the readings and the pope’s speech were very, very positively received by them,” Cardinal Sako said. “I think that will be an event for us.”

During his pastoral visit to northern Iraq to encourage Chaldean Catholic parishes, Cardinal Sako told CNS Iraq’s turbulent conflicts have fractured its diverse religious and ethnic mosaic. All the various communities, he said, “are now further divided. This is a phenomenon, a situation that didn’t exist before.”

“Little by little, Christians will leave. They can’t live with others who think they are apostate or infidels. But we (the church) are, with the government and others, trying to convince them to stay,” Cardinal Sako said. Iraq “is their history, their identity, even they have to keep their traditions, their faith.”

The patriarch did not shy away from the challenges his community faces, however.

“We have problems. We are suffering, but we have a mission here and a vocation. It’s not by chance that we are created here,” he said.

“Also, we have to witness to our Muslim brothers and sisters about our behavior, our faith and our morality. I think this is very important. Here, people are very attached to their churches,” he added.

The latest challenge has been in the form of Shiite militias, linked to Iran, which helped liberate Christian and Yazidi areas once under Islamic State control. Shiite militia influence and presence is worrying growing in towns that were predominately, if not entirely, Christian before the Islamic State takeover in 2014.

“There is a strategy for changing the demography of the Ninevah Plain. Now the militias are looking to have a headquarters in Bartella, which was totally Christian. Also, these militias are in Yazidi Sinjar, near the border of Syria,” Cardinal Sako said.

“Many Christians and Yazidis were forced to leave their houses and are now living in Europe, Syria, Lebanon, Jordan and Turkey. They need money to survive, so they are selling their houses,” he said. “The militias have money because they are supported by their parties, and certain countries, so they are buying up property.”

In other instances, however, the Shiite militias are simply claiming and occupying buildings and lands, observers said.

Cardinal Sako said some Christian families have returned to their towns, “but many houses have been burned, destroyed totally. We need money to rebuild them and the churches. We have, as Chaldeans, more than 15 churches in Mosul destroyed totally. Who will rebuild them?” he asked. Although financial assistance from the church, various aid groups, the U.S. and Hungary has been made available, still most of the towns’ infrastructure needs reconstruction.

Cardinal Sako pointed to a project underway by Iraq to rebuild Mosul’s Great Mosque of al-Nuri, blown up by the Islamic State. He said another important landmark across from the mosque is the Our Lady of the Hour Church, built in 1866 by Dominican Fathers. Although rebuilding has been promised, nothing much has happened.

“This is a kind of discrimination. Nobody is thinking about the Christians because they are a minority,” he said. “There should be a reciprocity.”

PREVIOUS: Love of God, love of neighbor are tied together, pope says

NEXT: Detroit Catholics help save iconic church of their twin parish in Ontario