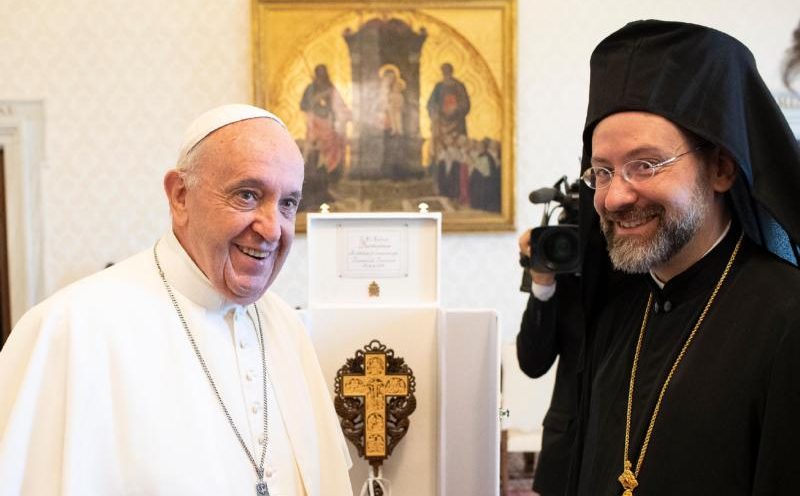 Pope Francis exchanges gifts with Orthodox Archbishop Job of Telmessos while meeting a delegation representing the Ecumenical Patriarchate of Constantinople at the Vatican June 28, 2019. The delegation was in Rome to celebrate the June 29 feast of Sts. Peter and Paul at the Vatican. (CNS photo/Vatican Media)

Pope Francis exchanges gifts with Orthodox Archbishop Job of Telmessos while meeting a delegation representing the Ecumenical Patriarchate of Constantinople at the Vatican June 28, 2019. The delegation was in Rome to celebrate the June 29 feast of Sts. Peter and Paul at the Vatican. (CNS photo/Vatican Media)

VATICAN CITY (CNS) — At the end of Mass on the feast of Sts. Peter and Paul, Pope Francis and Orthodox Archbishop Job of Telmessos walked down the stairs under the main altar in St. Peter’s Basilica and prayed together at the apostle’s tomb.

The archbishop was representing Orthodox Ecumenical Patriarch Bartholomew of Constantinople at the pope’s celebration of the feast of Sts. Peter and Paul, who were martyred in Rome and are the patron saints of the Roman church.

Greeting the archbishop in his homily June 29, Pope Francis told him, “Your presence reminds us that we can spare no effort in the journey toward full unity among believers, in communion at every level. For together, reconciled to God and having forgiven one another, we are called to bear witness to Jesus by our lives.”

Meeting members of the Orthodox delegation June 28, the pope said Sts. Peter and Paul are exemplars of “the apostolic courage of proclamation, which also entails a commitment to respond to the new challenges of the present time.”

Patriarch Bartholomew and his longstanding theological and pastoral concern about climate change is one example of that, the pope said, and “has been a source of inspiration for me.”

Another sign of Gospel courage, he said, is seen in Catholic-Orthodox cooperation in combating human trafficking, assisting migrants and refugees and working for peace.

Mentioning his recent meetings with Orthodox leaders in Romania and in Bulgaria, Pope Francis told the delegation, “I am increasingly convinced that the restoration of full unity between Catholics and Orthodox will come about through respect for specific identities and a harmonious coexistence in legitimate forms of diversity.”

“As bishop of Rome,” he said, “I wish to reaffirm that, for us Catholics, the purpose of dialogue is full communion in legitimate forms of diversity, not a monotonous leveling, much less absorption.”