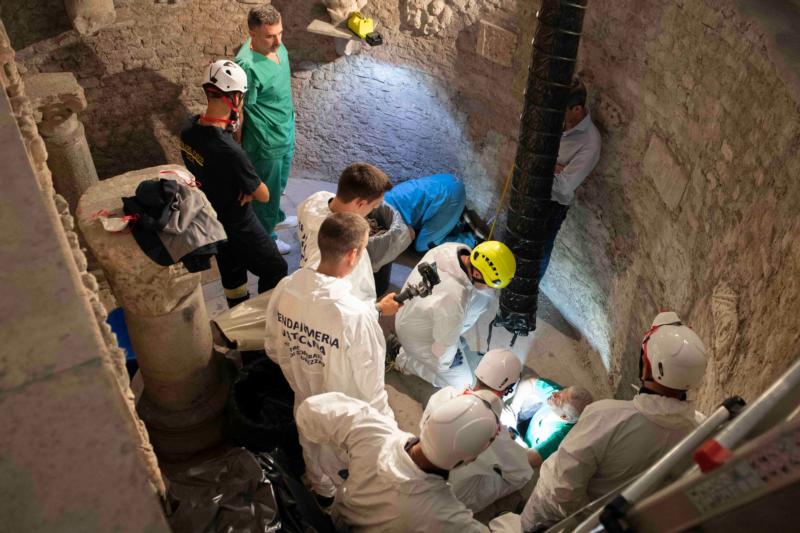 Workers inspect an ossuary at the Teutonic Cemetery at the Vatican July 20, 2019. The ossuary was inspected in the hope of finding the missing remains of a German princess and duchess and possibly the remains of Emanuela Orlandi, who disappeared in 1983. Thousands of bones were found in the ossuary, according to a representative of the Orlandi family who was present for the search. (CNS photo/Vatican Media)

VATICAN CITY (CNS) — During a search for the remains of a young Italian woman missing for more than 30 years, workers discovered an enormous number of bones inside two ossuaries in a building next to a Vatican cemetery.

Further studies on the remains will be carried out starting July 27, but it was not yet possible to predict how long it would take to conduct a “detailed morphological analysis of the remains found in the ossuaries,” Alessandro Gisotti, outgoing interim director of the Vatican press office, said July 20.

Gisotti said the investigation, led by a Vatican-appointed specialist in forensic medicine, Giovanni Arcudi, was being carried out according to internationally recognized protocols.

A genetics expert retained by the Orlandi family told reporters July 20 that the workers found what appeared to be “thousands of bones” belonging to perhaps dozens of individuals, both adult and minors.

The expert, Giorgio Portera, said, “I can’t say if it’s 1,000 or 2,000, but there are really very many” bones and bone fragments, leading him to assume they might represent “the remains of a few dozen people.”

Gisotti told The Associated Press in an email response to questions that it was “absolutely normal that in an ossuary, there is an elevated number of remains, above all in an ancient cemetery like the Teutonic. No surprise.” He said the total number of bones also included many tiny bone fragments.

A Vatican City State court had ordered the opening of the tombs indicated in the photo at the request of the family of Emanuela Orlandi, a Vatican citizen who disappeared in Rome June 22, 1983, at age 15, after she left her family’s Vatican City apartment for a music lesson. The Vatican agreed to open two tombs after the Orlandi family had been sent a letter that said, “Look where the angel is pointing.” The letter contained a photo of an angel above a tomb in the Vatican’s Teutonic Cemetery.

Vatican workers, supervised by Vatican police and a forensic anthropologist, opened the tombs July 11, along with Pietro Orlandi, the brother of the missing woman.

However, the side-by-side tombs were completely empty; they had been marked as the final resting places of Princess Sophie von Hohenlohe, who died in 1836, and Duchess Charlotte Frederica of Mecklenburg-Schwerin, the mother of King Frederick VII of Denmark, who died in 1840.

Investigators then inferred the remains of the noblewomen may have been moved more than 40 years ago when the Pontifical Teutonic College was expanded. That led them to the inspection of the two ossuaries — vaults containing the bones of multiple persons — in the floor of the college.

For decades, Orlandi’s case has been the object of conspiracy theorists who linked her disappearance to Freemasons, organized crime, the attempted assassination of St. John Paul II and other unsubstantiated theories.

In early July, Arcudi had told Andrea Tornielli, editorial director of the Dicastery for Communication, the plan was to conduct a morphological and DNA examination of any bones they found as well as piece together the skeletal remains to determine the number of deceased persons that were buried as well as their age and sex.

Their hope was to “exclude in a definitive and categorical way that there is some evidence … that can be attributed to poor Emanuela,” Arcudi had said.

NEXT: Sedition charges against Filipino prelates, VP are ‘beyond belief’