Give your lives for your flocks, pope tells archbishops 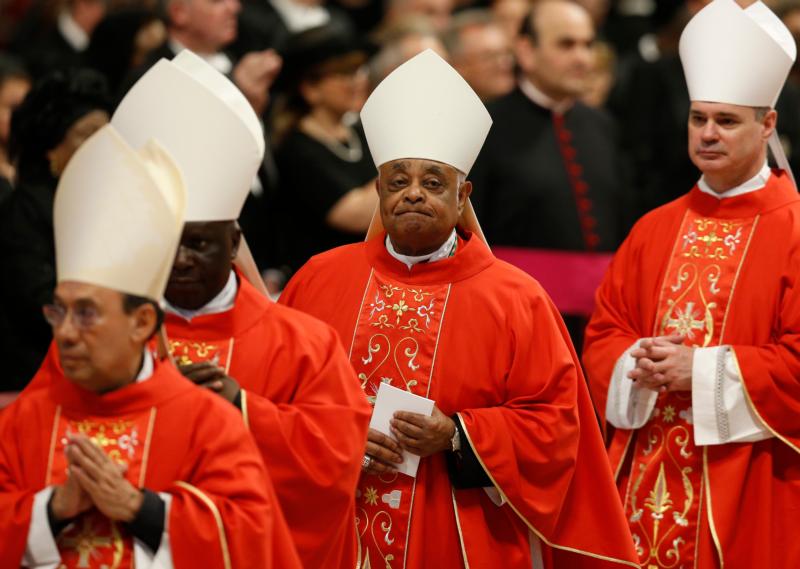 Archbishops Wilton Gregory of Washington, center, and Peter A. Comensoli of Melbourne, Australia, leave in procession after attending Pope Francis’ celebration of Mass marking the feast of Sts. Peter and Paul in St. Peter’s Basilica at the Vatican June 29, 2019. After the Mass the pope presented palliums to new archbishops from around the world. (CNS photo/Paul Haring)

VATICAN CITY (CNS) — Blessing bands of wool that archbishops will wear around their shoulders, Pope Francis said, “It is a sign that the shepherds do not live for themselves but for the sheep.”

“It is a sign that, in order to possess life, we have to lose it, give it away,” the pope said during his homily at Mass for the feast of Sts. Peter and Paul June 29.

The palliums are a woolen band that the heads of archdioceses wear around their shoulders over their Mass vestments.

Benedictine nuns at the Monastery of St. Cecilia in Rome use wool from lambs blessed by the pope each year on the Jan. 21 feast of St. Agnes to make the palliums, which are kept by St. Peter’s tomb until the Mass in St. Peter’s Basilica.

The palliums are about 3 inches wide and have a 14-inch strip hanging down the front and the back. The strips are finished with black silk, almost like the hooves of the sheep the archbishop is symbolically carrying over his shoulders.

“I love the imagery” of the pallium, Archbishop Byrnes told Catholic News Service. “Just the way it’s shaped suggests carrying the lamb on your shoulders.”

The 60-year-old archbishop was an auxiliary bishop in Detroit until he was sent to Guam amid turmoil surrounding sexual abuse allegations against the previous archbishop and concerns about his administration of the archdiocese. A Vatican court later found former Archbishop Anthony S. Apuron guilty of the sexual abuse of minors.

The pallium, given to archbishops by the pope, also is a sign of their unity with him as they minister to a portion of the Catholic “flock.” So, Archbishop Byrnes said, it is a sign of his obedience to the pope, but also expresses “my obedience, of a sort, to the people of Guam,” and the obligation to respond to and assist them.

The archbishop said that when he arrived in Agana there were six allegations of clerical sexual abuse and now there are more than 200.

When asked if there is a particular group in the archdiocese that he carries as lambs on his shoulders, he immediately responded, “the victim-survivors are in my daily prayer” and “those are the people I carry most in my heart.”

Receiving the pallium, he said, “is a boost to me. It illustrates a change in our diocese,” symbolically sealing a new start for the archdiocese.

Archbishop Gregory, speaking at a reception the afternoon before the Mass, said that receiving the pallium “is not simply an honor, it’s a challenge and a responsibility, which I gladly accept at his (the pope’s) invitation.”

The archbishop said, “I look forward to caring for the flock in Washington to the best of my ability.”

Archbishop Comensoli, who received the pallium at the end of his “ad limina” visit to the Vatican, told CNS, “The pallium, for me at least, is that sense of recognizing why I’m sent.”

“It’s an acknowledgment of what I am called to be, which is the shepherd of God’s people in Melbourne,” he said.

While Pope Francis continues to bless the palliums and give them to archbishops as his predecessors did, the pope also decided several years ago that the formal imposition of the woolen bands would be done by apostolic nuncios in the archbishops’ archdioceses.

Archbishop Comensoli said celebrating at both the Vatican and in his archdiocese show two dimensions of the life of the church: “the church universal and the local.”

The pope exercises his authority “as chief shepherd for the universal church” by giving the pallium to the archbishop, he said. When the formal imposition takes place in Melbourne Aug. 1, the first anniversary of Archbishop Comensoli’s installation, it will be a sign that each Catholic there has a particular role in the local community and his is as bishop.

In his homily at the Mass, Pope Francis focused on the figures of Sts. Peter and Paul and how Jesus chose them despite their failings and sins.

Both of them, he said, “made great mistakes: Peter denied the Lord, while Paul persecuted the church of God.”

“We may wonder why the Lord chose not to give us two witnesses of utter integrity, with clean records and impeccable lives,” he said. But there is a lesson there.

“The starting point of the Christian life is not our worthiness; in fact, the Lord was able to accomplish little with those who thought they were good and decent,” the pope said. “Whenever we consider ourselves smarter or better than others, that is the beginning of the end.”

“The Lord does not work miracles with those who consider themselves righteous, but with those who know themselves needy,” he said. “He is not attracted by our goodness; that is not why he loves us. He loves us just as we are; he is looking for people who are not self-sufficient, but ready to open their hearts to him.”

PREVIOUS: Secrecy of confession must never be violated, Vatican says