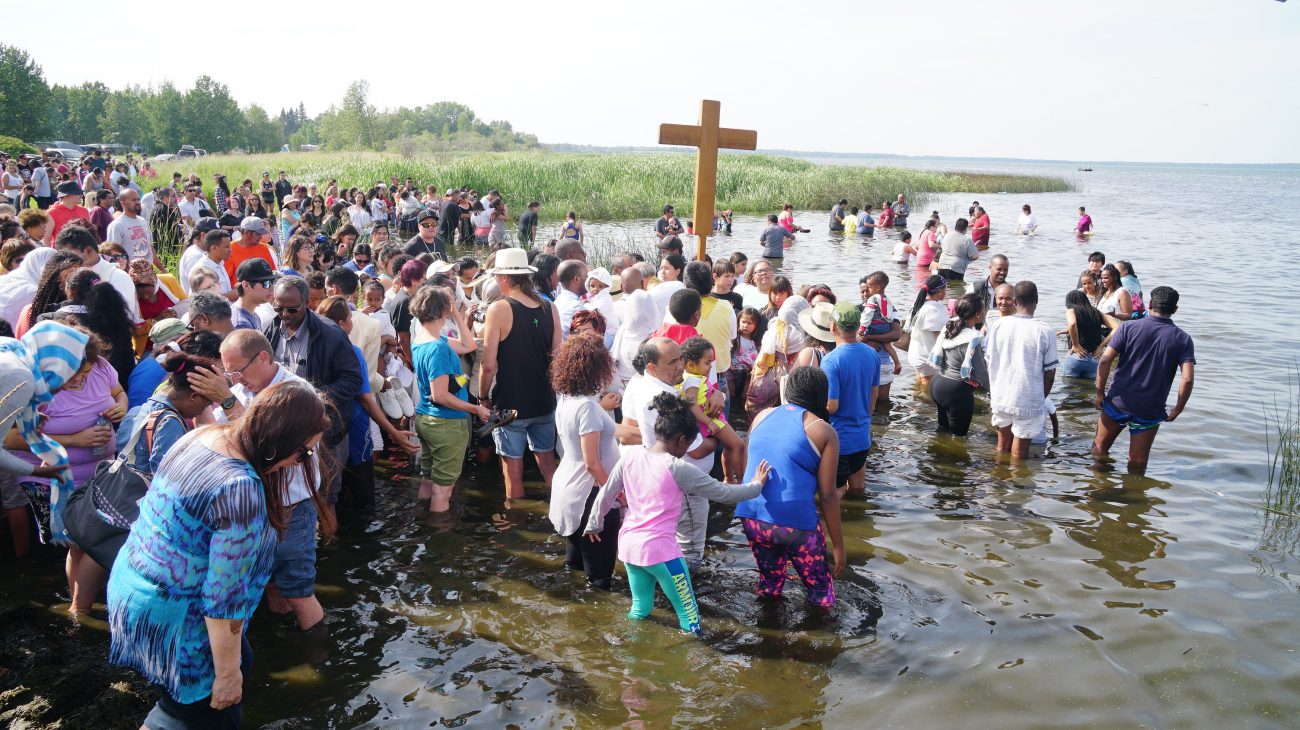 LAC STE. ANNE, Alberta (CNS) — As she battled the aching pains of stage 4 intestinal cancer, Evelyn Mercredi slowly lifted herself from her walker and stepped into the waters of Lac Ste. Anne expecting — and receiving — healing.

“I’ve been suffering so much, it was so hard just to come down here,” said Mercredi, 79, a Dene woman who traveled 1,200 miles from Fort-du-Lac, Saskatchewan, to experience the healing waters of the Alberta lake. “But now, I don’t feel any pain. I’m so happy to have gone into the lake.”

Mercredi is one of thousands of pilgrims from across Canada who gathered for the 130th annual Lac Ste. Anne Pilgrimage July 20-25.

The Lac Ste. Anne site, about 45 miles west of Edmonton, has been recognized by indigenous people for millennia for its powers to heal and transform physical, mental and spiritual ailments. It was called God’s Lake by the Alexis Nakota Sioux Nation and Spirit Lake by the Cree. Christian missionaries named it for Mary’s mother.

Mercredi’s cancer caused so much pain that her family doctor warned against joining the pilgrimage. But as soon as stepped into the lake, Mercredi said she was not only felt healed of her afflictions, but that a great joy suddenly coursed through her body.

A moment after Mercredi stepped out of the water, she took hold of the walker in which her family had been pushing her around. She felt restored and ready to walk the campground.

Countless stories of miracles and the crutches hanging on the walls of the Lac Ste. Anne shrine are a testament to the water’s spiritual power. As retired Archbishop Sylvain Lavoie of Keewatin-Le Pas, Manitoba, and Father Les Kwiatkowski plunged into the water and blessed person after person, it was clear that belief in the healing power remains as strong as ever.

“For so many people, this place is the beginning of new life,” said Father Kwiatkowski, pastor of Lac Ste. Anne Parish, who has joined the pilgrimage since 1990. “I am told so many stories each year of healings and conversions.”

Ten years ago, Anna Gambler experienced the miraculous power of Lac Ste. Anne firsthand. Since then, she has made the pilgrimage from her home in Wabasca, north of Edmonton, annually to honor that blessing.

Gambler suffered from diverticulitis for several years. The condition creates holes in the intestines that cause strong abdominal pains. Because of it, Gambler had to give up eating foods with nuts, popcorn and seeds.

After years of medical treatments that only temporarily reduced her pain, Gambler traveled to Lac Ste. Anne in 2009, hoping for a permanent solution.

She wandered far out into the lake and submerged her whole body. She wasn’t sure if her diverticulitis was gone, but her entire body felt cleansed and renewed. When her stomach pains did not return for a week afterward, she decided to take a risk and eat popcorn.

To her amazement, the abdominal pain was gone, and she has been clear of diverticulitis since.

“I didn’t know right away that I was healed, but from my face, my heart, to my knees and back, it all felt cleansed and refreshed,” Gambler said. “When I realized that the pain was not going to come back and I had been healed, I instantly just started to pray and thank God and St. Anne for what she had done.”

After another restorative plunge into the water, Gambler dried herself with a towel and spoke with a glowing smile. She said she will always return to Lac St. Anne to thank God for the healing she received.

“Once we kneel down in front of that St. Anne statue and pray that we will be able to come back next year, no matter what happens when we get back home to Wabasca, we are always brought back here,” she said.

That’s the heart of the pilgrimage’s purpose, said Chief Tony Alexis, whose Alexis Nakota Sioux Nation helps run the pilgrimage. He said it’s about people recognizing their connection to God and joining together in that faith, no matter their background or status.

“As soon as people get here, they get that sense of good spirit. With prayers all around us and the sacrifices people make to get here. We believe the Creator hears our prayers.”

Alberta Premier Jason Kenney visited the site July 21 and joined in praying a decade of the rosary. It’s believed to be the first time a sitting premier participated in the pilgrimage.