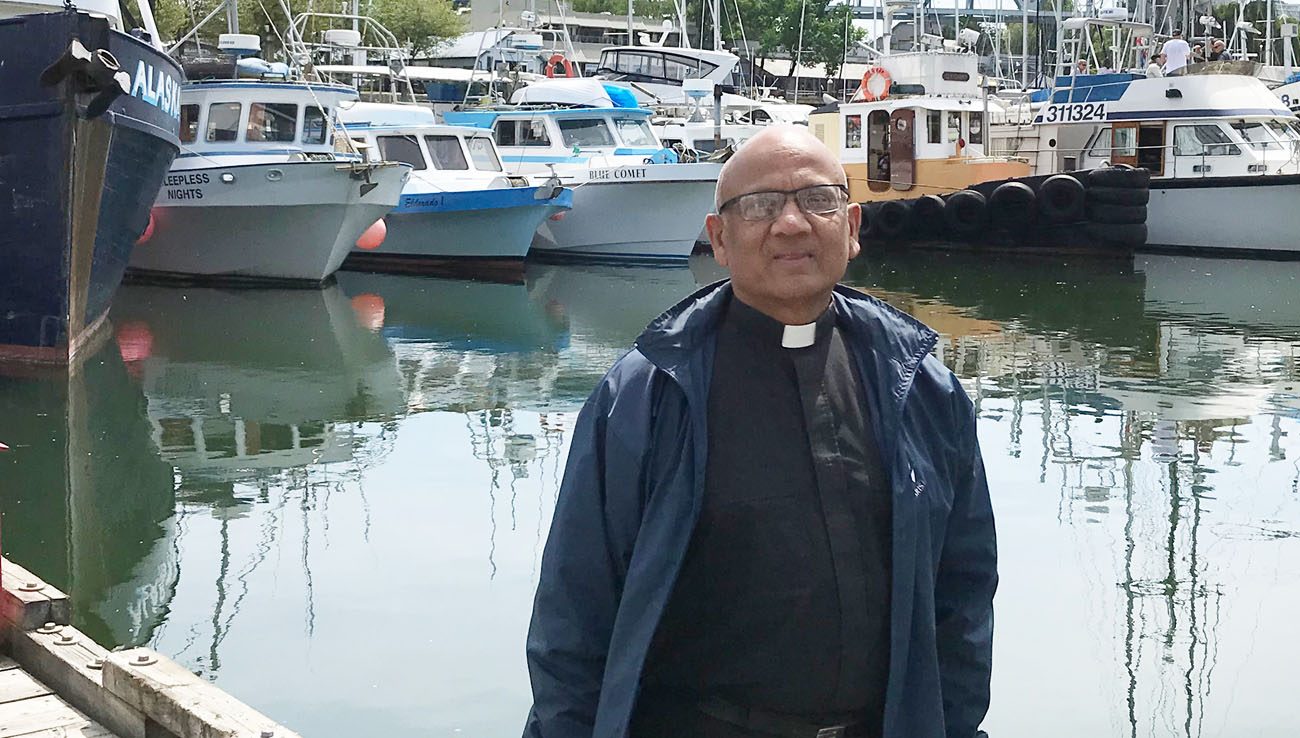 Deacon Dileep Athaide, a chaplain from the Archdiocese of Vancouver, British Columbia, is seen June 15, 2019, before heading to the annual Blessing of the (Fishing) Fleet. (CNS photo/Agnieszka Ruck, The B.C. Catholic Newspaper)

VANCOUVER, British Columbia (CNS) — On the mainland, most references to pirates are made in jest, but a chaplain to sailors in the ports of Delta and Vancouver said piracy is still a serious threat to those to whom he ministers.

“Piracy is a terrifying experience for seafarers,” said Deacon Dileep Athaide, a Catholic chaplain with the Apostleship of the Sea.

International Maritime Bureau statistics show that 57 ships were boarded, three were hijacked and nine were fired upon by armed pirates between January and June this year. In five separate incidents, 21 crew members were kidnapped.

Most of the attacks took place in the Gulf of Guinea, but while that may seem a world away to people living and working in British Columbia, it’s not so for those working on ships in international waters.

“Piracy and the threat of piracy can have a lasting effect on seafarers’ well-being and mental health,” Deacon Athaide told The B.C. Catholic, newspaper of the Archdiocese of Vancouver. “Our experience of caring for seafarers shows that swift intervention is essential to minimize the impact of a pirate attack, so crews can return to work with confidence.”

The deacon boards ships docked at local ports just about every day to ask sailors how they are doing, deliver fresh pastries and blessed rosaries, and offer a listening ear or prayer for any of their concerns.

Pope Francis also drew attention to the plight of seafarers on Sea Sunday, July 14. The pope tweeted: “Today we celebrate Sea Sunday, dedicated to seafarers and fishermen. I pray for them and their families, and I encourage every effort to protect and safeguard their human rights.”

Cardinal Peter Turkson, prefect of the Dicastery for Promoting Integral Human Development, also issued a statement urging people to pray for and authorities to stand up for those who “crisscross the oceans and the seas, transporting almost 90 percent of goods from one nation to another.”

“Isolation and depression, combined with a lack of a supportive environment, affects the mental health of seafarers, sometimes with tragic and heartbreaking consequences for their families, crewmembers, and ship owners.”

For his part, Deacon Athaide strives to make every sailor he meets in Delta or Vancouver feel welcome, listened to and valued. His ministry included blessing a fleet of fishing boats June 15 and celebrating International Day of the Seafarer with prayer and barbecues in downtown Vancouver locales June 25.

Apostleship of the Sea (also called Stella Maris) is an international Catholic organization. It was founded in Glasgow, Scotland, and is preparing to celebrate 100 years of serving the pastoral and welfare needs of seafarers next fall.

PREVIOUS: Hush hour: Spirituality of silence is a journey toward God, priest says