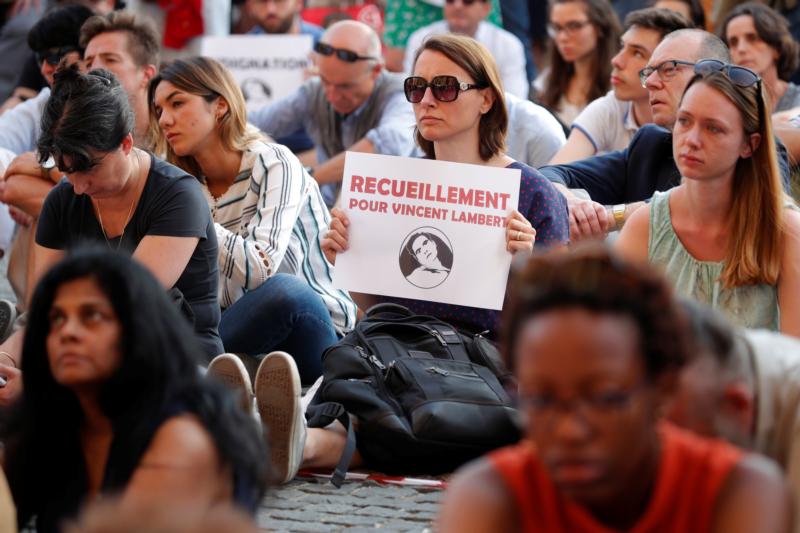 People demonstrate in Paris July 10, 2019, in support of Vincent Lambert, who suffered serious brain damage and had been in a deep vegetative state for more than a decade. “Every life is valuable, always,” Pope Francis tweeted after offering prayers for Lambert, a 42-year-old French man who died July 11, nine days after doctors stopped providing him with nutrition and hydration. (CNS photo/Charles Platiau, Reuters)

“May God the Father welcome Vincent Lambert in his arms,” the pope’s tweet said. “Let us not build a civilization that discards persons whose lives we no longer consider to be worthy of living.”

The Pontifical Academy for Life called the death of Lambert a “defeat for our humanity,” and Guinean Cardinal Robert Sarah, prefect of the Congregation for Divine Worship and the Sacraments, called Lambert a “martyr” in a tweet.

Lambert, who suffered serious brain damage more than 10 years ago, died after years of court battles divided his family.

Alessandro Gisotti, interim director of the Vatican press office, said in a statement, “With pain we heard the news of the death of Vincent Lambert. We pray that the Lord will welcome him into his home, and we express our closeness to his loved ones and all those who were committed to assisting him with love and dedication to the end.”

Gisotti also reminded people what Pope Francis had said earlier about the case: “God is the only lord of life, from its beginning to its natural end, and our obligation is to safeguard it always and not give into the throwaway culture.”

Since being involved in a motorcycle accident in 2008, Lambert had been variously described as being “minimally conscious” or in a vegetative state.

His wife and six of his siblings supported a recommendation made by doctors in 2013 that the provision of nutrition and hydration through a gastric tube should be stopped. Lambert was able to breathe on his own.

But Lambert’s parents and two other siblings had fought the decision in courts, insisting as the Catholic Church does that nutrition and hydration were not extraordinary measures for prolonging his life.

Doctors at the clinic in Reims, France, where Lambert had been cared for, started withdrawing nutrition and hydration in May when a court ruled in his wife’s favor. However, a few hours later, an appeals court reversed the decision and ordered a resumption of tube feeding and hydration.

In late June another court ruled that care could be discontinued; doctors began withholding nutrition and hydration July 2.

Archbishop Eric de Moulins-Beaufort of Reims, Pope Francis and several Vatican officials had made public comments about the case, emphasizing the church’s position that while extraordinary means of prolonging a patient’s life are not morally obligatory, in most cases nutrition and hydration are normal care and withholding them is a “serious violation of the dignity of the person.”

NEXT: Praising God for gift of creation leads to respect for it, pope says