Why migrants flee: ‘They put a gun to my head,’ Honduran mom says 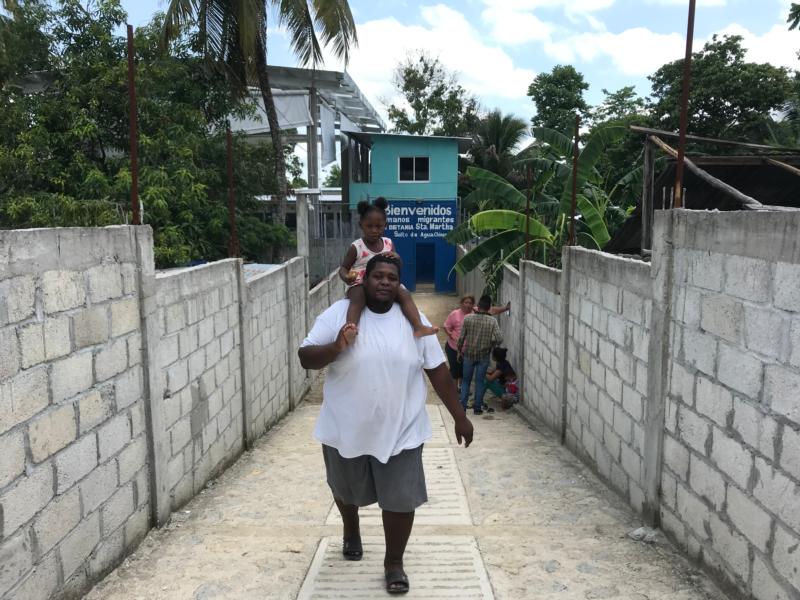 TENOSIQUE, Mexico (CNS) — Maribel — a Garifuna woman from Honduras and mother of six children, ages 6 months to 16 years — only wanted to work.

She baked coconut bread and sold it the streets of San Pedro Sula, Honduras, until a gang started demanding a cut — roughly 20 percent of her earnings. After threats and violence and futile attempts at negotiating with the gang, she fell behind in her payments. Gangsters eventually showed up at her daughter’s school to send a message of intimidation, forcing Maribel and her family to flee the country.

“I was being pursued,” she said from a shelter run by the Franciscans in southern Mexico. “I’m scared they’re going to come looking for me here,” she added, noting that gang members were now threatening her sister in Honduras and asking about her whereabouts.

Maribel’s plight highlights the despair and desperation of many migrants, who flee violence, poverty and, increasingly, drought and the early effects of climate change in Central America.

Mexico has sent members of its National Guard to stop migrants at its southern border, and stories of overcrowding and unsanitary conditions in U.S. and Mexican migration detention centers have surfaced.

U.S. President Donald Trump — who threated Mexico with tariffs on its exports if migration was not stopped — has praised Mexico for its increased enforcement, telling reporters July 1: “Mexico is doing a lot right now. They have almost 20,000 soldiers between the two borders. … And the numbers are way down for the last week.”

But the migrants streaming out of Central America seem undeterred due to deteriorating conditions at home.

Few migrants grasp the geopolitics at play, focusing instead on seeking safety or escaping hunger at home. Staff at shelters in southern Mexico say the flow of migrants has remained high.

Militarization, however, forces migrants to take paths less traveled to avoid police and soldiers, and this puts them more at risk, say shelter directors.

“Migrants don’t come here because they want to. Migrants leave their country because they don’t have any other alternative,” said Franciscan Sister Diana Munoz Alba, a human rights lawyer and a member of the Franciscan Missionaries of Mary who works at a migrant shelter in Chiapas. “(There’s) a paradox of risking their lives to save their lives, and this militarization (of Mexico) is not going to stop migration.”

Maribel, whose name was changed for security reasons, fell victim to criminals shortly after crossing into Mexico from Guatemala in late May. Three hooded assailants spotted her and her family walking along a rural road and robbed them of their meager possessions.

“The threw us face down … the kids face down. They were scared, crying,” she recalled.

Maribel said she had never thought much about migrating, despite the difficulties of life in the Atlantida department on the Honduras’ Atlantic Coast — an area populated by Afro-Hondurans, who have been abandoning the country in droves.

After her husband suffered a disability in his construction job, Maribel started her own informal business, harvesting coconuts and baking coconut bread in Honduras.

She sold $60 of bread daily, but had to hand over 20 percent daily to the Calle 18 gang. There were other expenses, too, she said, such as the cost of sending her children to school, even though education is supposed to be free for children in Honduras.

In December, the gangs made greater demands, which she refused. As she worked one day, “They put a gun to my head and took all I had,” Maribel said.

She eventually stopped paying. Then the gang came looking for her 16-year-old daughter. Maribel saved her money and left Honduras with her family.

Violence has sent thousands fleeing from Honduras. But observers say other factors are driving migration, including poverty and political factors. Migrants speak of the sorry state of services such as health and education.

“That’s why we’re looking to migrate, because the economy is so bad,” said Elquin Castillo, 26, who left a fishing village with his pregnant wife, infant daughter and 20 relatives in June.

Javier Avila, 30, gave up after drought in southern Honduras wiped out his melon crop for the second consecutive season. He borrowed $82 to rent a small plot for his crop — which was lost — but could not find the funds to sow again in 2019.

“It used to be normal that it rained in the winter, but not any longer,” he said from a migrant shelter.

Maribel expressed similar pessimism over Honduras. She was hoping to receive a document to travel freely through Mexico, though she was uncertain how much longer she would have to wait.

“I can’t go back to Honduras,” she said. “These gangs have people everywhere.”