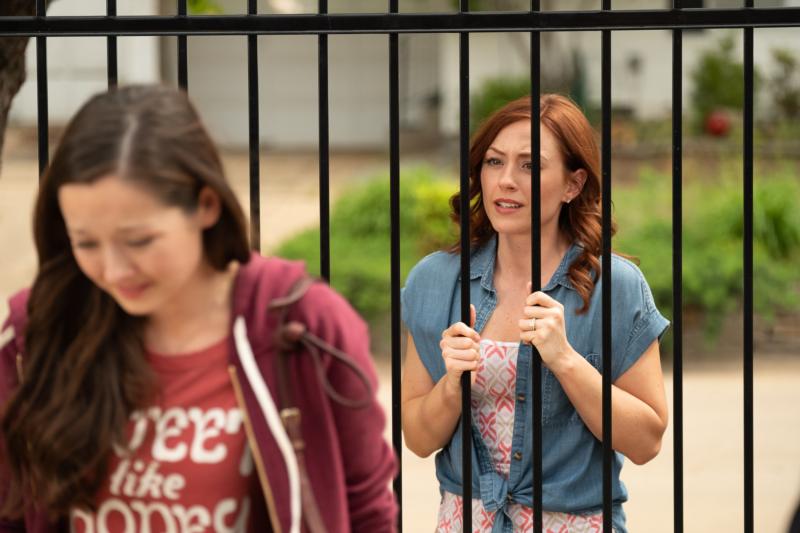 Ashley Bratcher, right, who plays Abby Johnson, is pictured in a scene from the film “Unplanned,” the story of Abby Johnson, a former Planned Parenthood clinic director, and her decision to join the pro-life movement. (CNS photo/Unplanned.com)

OTTAWA, Ontario (CNS) — Two independent theaters have canceled screenings of the pro-life movie “Unplanned” after managers and owners received “serious threats,” according to the Canadian distributor of the movie.

“They were originally going to (screen it) and were able to endure a lot of negative publicity,” said B.J. McKelvie, president of Cinedicom, the Canadian distributor of the U.S. film about former Planned Parenthood director Abby Johnson. “They got a lot of positive support as well.

“Then things took a turn. There started to be more serious threats towards managers and the families of theater owners.

“There were two that were death threats,” said McKelvie.

McKelvie, a pastor in Fredericton, New Brunswick, advised theater owners to contact police about the threats.

“They did so, and we were asked not to speak on the specifics, but have turned it over to authorities,” he said.

The film chronicles Johnson’s decision to leave Planned Parenthood and become a pro-life activist after witnessing an ultrasound-guided abortion.

The movie was scheduled for release in Canada July 12 after earning about $18 million since its U.S. debut in March.

“The theaters aren’t scared,” he said. “We’ve got word back, they’re a little concerned about protesters and that. It’s just a movie, and everyone has a right to go see a movie if they want to or choose not to go see it.”

Landmark Cinemas and Cineplex Odeon, Canada’s two largest theater operators, are standing firm, with screenings scheduled in select theaters across the country for a week.

McKelvie said he was shocked by the threats.

“I’ve never heard of this before,” he said. “Not in Canada, and I’ve been in this industry a long time.”

Salmar Theatres in Salmon Arm, British Columbia, canceled screenings in its two theaters. The general manager did not wish to comment, but a board member of the Salmar Community Association told the Salmon Arm Observer the movie was pulled out of concern for the manager’s personal safety.

“We have a track record of showing things from a variety of points of view … We try not to preclude things because of whatever personal opinions may exist on our board or something like that,” Chris Papworth told the newspaper. “Certainly in the past, there hasn’t been an effort to dox employees or, specifically, the general manager, by releasing their personal information on social media and then encouraging people to go after them as the one responsible for some heinous act.”

McKelvie told Canadian Press July 3 The Movie Mill in Lethbridge, Alberta, also received threats, but he did not confirm if that was the other theater that pulled the film.

PREVIOUS: Ghanaian youth urged to support the vulnerable through acts of charity