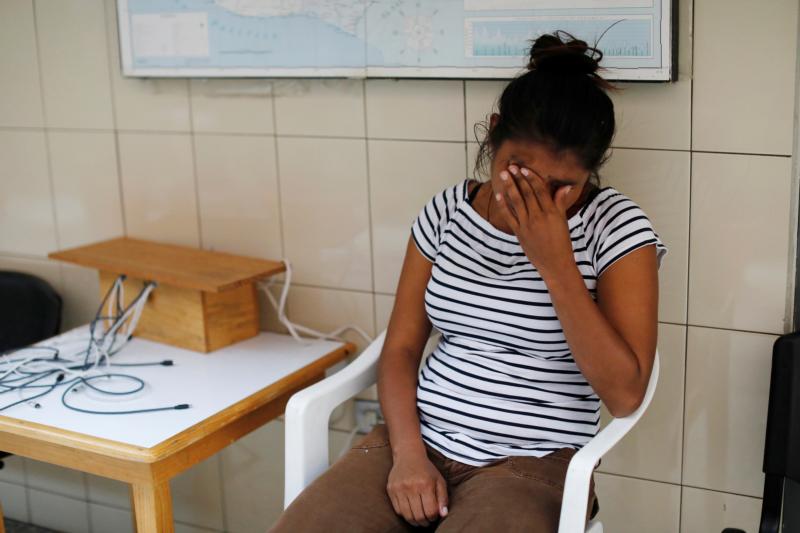 A Honduran woman holds back tears while waiting in a migrant shelter in Guatemala City, Guatemala, July 15, 2019. Guatemalan bishops oppose the idea of entering into an agreement with the U.S. government to deem it a “safe third country” for asylum-seekers. (CNS photo/Luis Echeverria, Reuters)

MEXICO CITY (CNS) — Guatemala’s bishops criticized the idea of the country entering into an agreement with the U.S. government to deem it a “safe third country” for asylum-seekers.

Signing such an agreement would have meant migrants traveling through Guatemala and wishing to seek asylum in the United States would be required to do so in Guatemala.

In a statement issued July 13, the Guatemalan bishops expressed “their enormous concern” over the consequences of such an agreement, which would lead to a “worsening of the difficult situation for migrants in our country, people who look to the North for the opportunities they are denied here.”

“We cannot absorb the migrant population that comes from other countries and those whom we would be forced to maintain and provide security for, health care, adequate shelter and, eventually, sources of work,” the statement continued.

The court decision prompted Morales to postpone a summit in Washington, where he was expected to meet with President Donald Trump and sign the safe third country agreement.

Morales leaves office later this year under a cloud of suspicion due to accusations of corruption against family members. But he has courted the favor of the Trump administration — going so far as to move Guatemala’s embassy in Israel to Jerusalem, following Trump’s lead. He also moved to end the work of a U.N.-sponsored anti-impunity commission, supported by previous U.S. administrations.

Trump has been pressuring countries south of the United States to stop migrants from reaching the U.S. border. Mexico has rejected signing a safe third country agreement, but it has beefed up border security and accepted the return of asylum-seekers, who must wait in Mexican cities while their cases are heard in U.S. courts.

Migrants have arrived at the U.S. border in 2019 in numbers not seen in more than a decade, with Guatemalans making up the largest nationality of those detained by U.S. Customs and Border Protection.

Guatemala’s bishops accused Morales of showing “little transparency” in the possible signing of a safe third country agreement and called on the government to get its priorities in order.

“Governmental action should be centered on its responsibility to provide at a minimum the opportunities for a dignified life to the population,” the bishops said.

Observers say much of Guatemala’s outward migration comes from the rural regions with high indigenous populations, where food insecurity is widespread and prices for coffee — which underpins the economy — have collapsed. They also say Guatemala lacks the resources to support so many asylum-seekers.

“Offloading the responsibility to care for thousands of migrants and asylum-seekers to Guatemala would be disastrous for both asylum-seekers and for Guatemala,” said Mike Allison, political science professor at the Jesuit-run University of Scranton and an expert on Guatemala.

“Guatemalans and migrants passing through the country are already susceptible to gang violence, organized crime, drug-trafficking organizations and corrupt police and government officials. Adding another group of long-term vulnerable people to the mix will worsen security conditions and perhaps destabilize Guatemala in its entirety.”

NEXT: As Ethiopia works for reform, church tries to support people in many ways