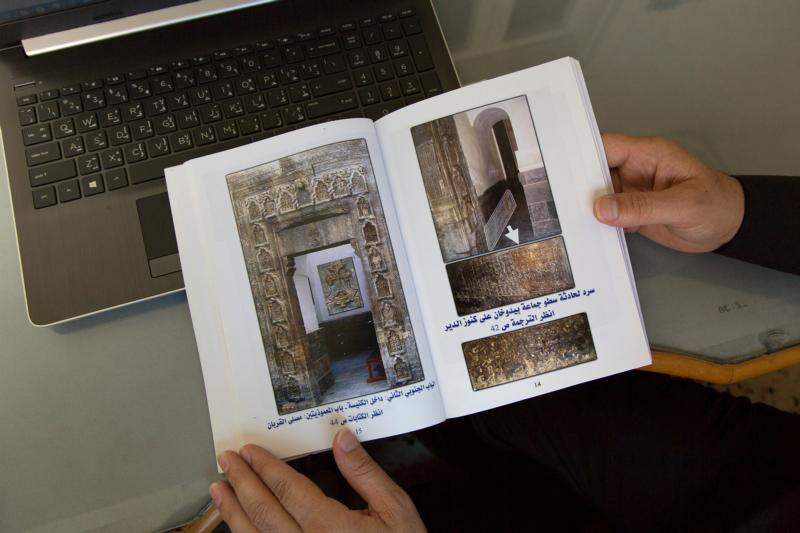 Syriac Catholic Father Youssef Sakat shows a photograph of a door at Mar Behnam Monastery July 8, 2019. The monastery, which is located near Mosul, Iraq, was destroyed by Islamic State forces in 2014. (CNS photo/Dalia Khamissy)

BEIRUT (CNS) — The first time a band of Islamic State militants “visited” the monks, they presented the monks with a kind of suggestion, in a nonthreatening manner: “Why don’t you become a Muslim?”

Already, the four monks at the ancient Syriac Catholic Mar Behnam Monastery in Khidr, Iraq, had felt they were under siege. Ten days earlier, on June 10, 2014, five carloads of militants roared through the peaceful road leading to Mar Behnam, announcing through megaphones that the Islamic State was in control. Not long before that, the Iraqi army had withdrawn from a checkpoint near the monastery, located southeast of Mosul.

“Visits” from the terrorists the next few weeks intensified: banging on the monastery doors and accusations of the monks being infidels.

“Quite frankly, we were more than frightened,” said Syriac Catholic Father Youssef Sakat, who had served as Mar Behnam’s superior.

The monks kept up with their regular daily routine of prayer and Mass in the monastery, which dates back to the fourth century. They prayed for protection through the intercession of St. Behnam, a martyr, with faith that “we were in a blessed place,” mindful that generations of Syriac Catholic Christians had also faced persecution, and still the faith had endured, Father Sakat told Catholic News Service.

The monastery “was built by local people, stone by stone,” he said of Mar Behnam. “I’m sure they put their hearts into their work. I feel it was made with love.”

Under Father Sakat’s direction since 2012, Mar Behnam had flourished, welcoming up to 250 visitors on weekends — even from around the world — for retreats and lodging with the goal of helping people to better understand the monastic life. The monks would engage the children in lively faith-based activities.

“We wanted to show them that Mar Behnam is their home, too,” Father Sakat said.

A Muslim friend the monks trusted was keeping them abreast of the worsening situation, but even he was becoming fearful.

“I’m sorry, Father, I can’t come to the monastery anymore,” he told the priest. “Even I’m being watched. It’s becoming very dangerous. They want to kill you.”

All the while, Father Sakat was deeply concerned about how to safeguard the chalices and other sacramentals and the monastery’s extensive collection of religious manuscripts from inevitable destruction by the militants.

The 630 manuscripts, dating from the 12th to 18th centuries, were written in a range of languages, including Syriac, Greek, French and Latin.

Twice, Father Sakat tried to leave by car, with the intention of taking manuscripts to Qaraqosh, nine miles away. Each time, the militants at the Islamic State checkpoint near Mar Behnam told the priest that he was not allowed to take anything from the monastery.

“It doesn’t belong to you,” they said. On his third attempt, he was ordered to return to the monastery: “If we see you outside, we will kill you.”

On their own, the monks could not come up with a solution, Father Sakat said.

He recalled that on July 19, late in the afternoon, “I felt in my heart: I have to hide them now.” He chose a long, narrow closet under a stairwell that was used to store cleaning supplies.

“It was the Lord who directed us,” Father Sakat said.

Beginning at 8 p.m., the monks worked together, carefully placing the sacramentals and manuscripts into nine steel barrels used for storing grain. With cinderblocks from a monastery renovation project, they built a false wall in the closet, hiding the barrels behind it. With a cement mixture, they painted all the walls to give them the same appearance. Cleaning supplies were put back in place in the closet. The monks even left the closet door ajar, so as not to rouse suspicions of any Islamist intruder.

They finished their work at 3 a.m.

At 1:30 p.m., four Islamic State militants barged through the Mar Behnam door with a sheikh. The monks were given three choices: either become Muslim, pay the jizya tax or leave.

“We prefer to leave,” Father Sakat told the Islamists. They were allowed 15 minutes to vacate. Father Sakat was ordered to turn over all the keys to the monastery and vehicles.

Banished from his beloved monastery, as he walked out the door, “I looked back and told Mar (St.) Behnam, ‘I did what I had to do. Now I entrust them under your intercession, by the power of God. Keep them safe. They are under your protection,'” Father Sakat recounted of his plea to safeguard the sacramentals and manuscripts.

The monks were ordered into one of the militants’ vehicles. Two miles from the monastery, the militants left the monks on the road, warning: “Whoever looks back, we will shoot him.”

The monks walked several hours to Qaraqosh. Their reprieve from terrorism was not for long. Soon that city and other Christian villages in the Ninevah Plain also fell to Islamic State.

In June 2015, the Syriac Catholic patriarch called Father Sakat to Lebanon for his new mission, helping Iraqi Christian refugees who had come to Lebanon from Kurdistan, in northern Iraq.

Now the priest heads the Syriac Catholic Holy Family center in an area of Beirut where many Iraqi Christians settled, with the hope of being resettled in Western countries. Initially, there were 1,200 Syriac Catholic families, totaling 6,700 people. Many are now scattered all over the world; 600 families remain in Lebanon, waiting.

In March 2015, the Islamic State blew up part of Mar Behnam, and the monastery remained under the militants’ control until the area was liberated in October 2017.

When Father Sakat visited the monastery that December, he said he was shocked at the destruction.

Graffiti covered the walls. The pillars of the altar were incinerated. One by one, all religious phrases, crosses and symbols inscribed into the monastery’s stones were drilled out and defaced, including the names of priests inscribed on tombs. Religious statues were smashed, a statue of Mary beheaded.

“It’s like they want to erase all the history of Christianity,” Father Sakat said.

Father Sakat stood with anticipation as the wall concealing the manuscripts was chiseled away with a jackhammer, to reveal, intact, the nine steel barrels containing the sacramentals and manuscripts.

The manuscripts were individually packed, this time into car trunks to transport them to the Queen of Peace Syriac Catholic Church in Irbil for safekeeping.

Restoration of the monastery is currently in progress, but “it needs some time,” Father Sakat said.