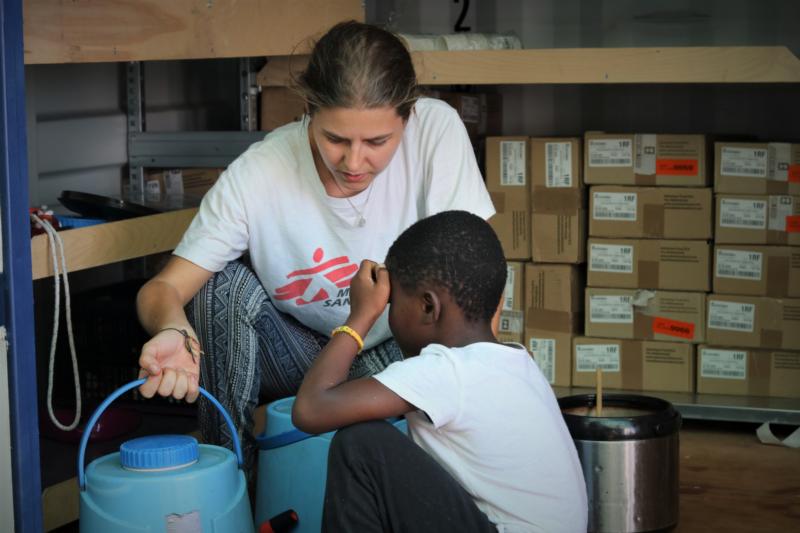 A rescued child migrant is seen aboard the Norwegian-flagged ship, Ocean Viking, near Linosa, Italy, between Aug. 9 and Aug. 12, 2019. Archbishop Paul Gallagher, the Vatican secretary for relations with states, said Aug. 22 that a patriotic love for one’s country and culture does not mean closing off oneself to others, particularly those in need. (CNS photo/Ocean Viking handout via Reuters)

VATICAN CITY (CNS) — A patriotic love for one’s country and culture does not mean closing off oneself to others, particularly those in need, said the Vatican foreign minister.

“No one calls into question the sovereignty of a country, of a nation,” Archbishop Paul Gallagher, the Vatican secretary for relations with states, told Vatican News Aug. 22.

The problem is an “exaggerated view of sovereignty” that calls for “total closure to others,” he said.

“Perhaps it has a certain theoretical, pragmatic attraction, but I don’t think it is the path to take,” he said. The archbishop was in Rimini, Italy, where he was addressing a large annual meeting sponsored by the lay movement, Communion and Liberation.

In the interview with Vatican News, he said that everyone is “interconnected,” and it is too difficult for one nation to guarantee by itself all of its people’s needs, for example, for peace, defense and security.

“We very much value patriotism, the love of one’s country, one’s culture, the people,” he said. “In the Catholic faith — and I believe in other Christian denominations, too — there is a view of openness toward others,” which is rooted in an understanding that “there are more things we have in common than things that divide us.”

The archbishop touched on issues of migration and nations’ rights and duties in his formal speech Aug. 21 at the Rimini meeting. The Vatican released a copy of his speech the next day.

Much of the debate underway in Europe, he said, is often tilted in favor of demanding individual and collective rights, leaving little mention of essential and complementary responsibilities and duties.

The Christian view of solidarity stems from an objective and reasoned awareness that each person is “part of one body, therefore, if one member suffers, everyone suffers,” he said.

So, when looking at the issue of migration, “it is necessary to rediscover the duties, more than the rights, that are at play. The most obvious duty above all is human solidarity toward the person who is in need, suffering and often in danger.”

Helping others is “a fundamental duty,” he said.

“It is a duty that, before it concerns nations and governments, concerns each one of us. It is the ‘ABCs’ of Christian charity,” he said, citing a passage from Matthew 25 that recounts how to respond to the poor, the hungry, the thirsty, the naked, the imprisoned and the stranger.