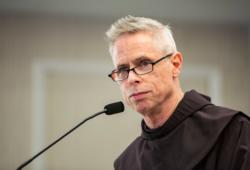 CHICAGO (CNS) — U.S. Franciscan Father Michael Perry, minister general of the worldwide Order of Friars Minor, is stepping away from his duties for an indefinite period to recuperate from injuries sustained in a bicycling accident in Chicago.

Despite the injuries, Father Perry was able to send a message to his fellow Franciscans Aug. 19 describing his accident and the aftermath.

“I was riding my bike along the lakefront, something I have done each day since beginning my holiday in the United States,” he wrote from the University of Chicago Medical Center, where he is hospitalized.

“Unfortunately, I did not see a place in the road where there was a hole. I entered the hole but then ran into another slab of concrete, which prevented me from moving forward. As a result, I fell from the bike onto my left side,” Father Perry said.

“The impact of the fall onto hard cement resulted in the breakage of part of the pelvic bone that holds in place the femur and controls leg movement. As a consequence, I will undergo surgery to reconstruct of the affected areas. I thank God that no other parts of my body were injured.”

Franciscan Brother Octavio Duran told Catholic News Service Aug. 20 that Father Perry had surgery Aug. 19. “It was successful, but it’s going to take a while for his recovery,” he said.

“According to the doctors, it is a complex injury that will require extensive post-operation physical therapy and rehabilitation. I will be absent from the General Curia for an extended period of time,” said Father Perry, whose office is in Rome at Franciscan headquarters.

He cited a provision in the Franciscans’ general constitution that covers situations like the one he is facing.

“During my absence as I am impeded, all issues and matters must be referred to the vicar general, Brother Julio Cesar Bunader,” Father Perry said.

Franciscan Father Joe Rozansky, director of post-novitiate formation for the order, said Father Perry’s surgery lasted about six hours. Doctors had to reconstruct the shattered hip socket and stabilized it with a plate and some screws.

Further surgery is not contemplated, but Father Perry will have to stay off his feet for 90 days, according to Father Rozansky. He may be discharged from the hospital within a week, he added, but doctors will have to assess his rehabilitation needs.

“They’re going to be taking X-rays all along these 90 days to see what he can do” as he heals, Father Rozansky told Catholic News Service, adding that, upon release, he will stay at a Franciscan friary nearby; “he ain’t goin’ to Rome right away.”

Prior to that, Father Perry had worked on African development for Catholic Relief Services, as an international policy adviser for the U.S. Conference of Catholic Bishops and had headed the Africa desk at Franciscans International. In addition, he worked for 10 years as a pastor, teacher and development director for Franciscan programs in Congo.

A native of Indianapolis, Father Perry holds a doctorate in religious anthropology, a master of divinity degree in priestly formation, and a bachelor’s in history and philosophy. The priest, who is 65, entered the Franciscans in 1977 and was ordained a priest in 1984.

“I will ask one of the friars of my province to provide updates to the General Curia as things develop,” Father Perry said. “Please keep me in your prayers!”