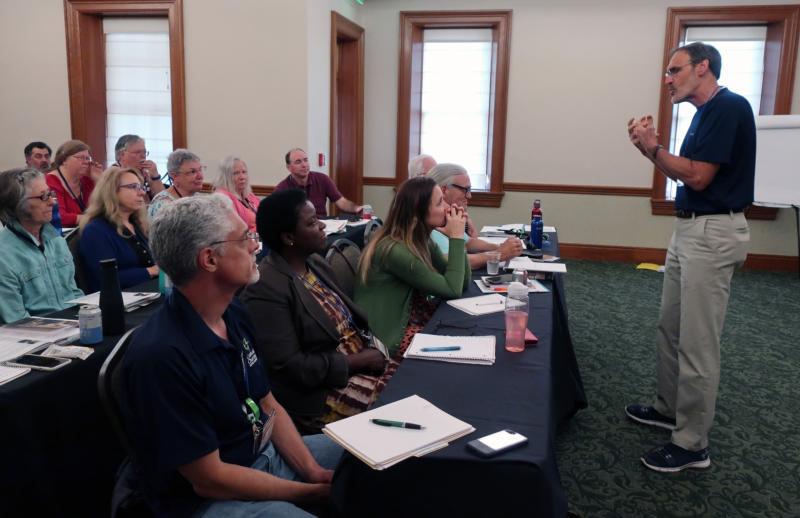 Attendees at the annual Social Action Summer Institute in Salt Lake City listen to a speaker at a July 27, 2019, session. Catholic social action directors from across the country were urged to continue their work of fighting social injustices during the July 25-28 institute at the University of Utah. (CNS photo/Linda Peterson, Intermountain Catholic)

SALT LAKE CITY (CNS) — Catholic social action directors across the country were urged to continue their work of fighting social injustices during the annual Social Action Summer Institute July 25-28 at the University of Utah.

“We come here in response to the mandate of Christ to put our faith into action according to the spirit of the Gospel,” said Salt Lake City Bishop Oscar A. Solis in remarks to conference participants at the opening Mass July 25.

The event was hosted by the Diocese of Salt Lake City and its theme: “Two Feet, One Voice: Building a Home for All,” resonated with many of the attendees.

“This has integrated a lot of different issues,” Lisa Stiller, a Consistent Life Report board member, said of the theme and conference. “It always makes me rethink about what the meaning of pro-life is. We have to keep expanding that meaning; this is why we have to be out there taking part in the protests against what’s happening at the border, where we have to be out there protesting what the federal government just did about executions, why we need to take a real stand on climate change. We just need to keep expanding those borders and educating people on what we’re about.”

Over the four-day program, conference-goers heard from speakers, participated in hands-on workshops, and some even visited local programs including a farm-based job training program, a food business training program, emergency food pantry and a group of disadvantaged mothers working to identify real solutions to the struggles that come with raising children while experiencing poverty.

Others stayed at the university and learned the principles of congregation-based community organizing from representatives of a Los Angeles network. Topics for the sessions included serving the poor, employment options of the homeless, affordable housing, fighting human trafficking and social trauma.

The conference also offered diocesan and parish seminars where participants could learn how to more effectively integrate Catholic social teachings into their lives and their ministries.

Sean Wendlinder, a grant coordinator with the Catholic Campaign for Human Development, the U.S. bishops’ domestic anti-poverty program, said the conference reaffirmed “the ongoing capacity for this work in the church. We’re understaffed, underutilized but people work hard and do their best to try to make the most of the capacity that they have.”

Participants also heard from keynote speaker Archbishop John C. Wester of Santa Fe, New Mexico, who said countries have the right to secure their borders, but they do not have a right to do so at the expense of human rights and human dignity.

Although the church continues to deal with the impact of the sexual abuse crisis and other challenges, Catholics must still be actively engaged in ministering to their brothers and sisters, he said. “In the midst of this crisis, it does not mean the church should shrink from our duty in fighting social injustice, which these days is very prevalent in our country and our world,” he said.

“We’re at a pivotal moment in our country’s history where we either maintain our values as a safe haven for those who are oppressed, or we become a different country which places an emphasis on nationalism over the global common good,” he said.

The archbishop also said he is “proud of our Catholic response and that of so many other Christian and non-Christian religious and people of goodwill.”

“We are involved in this debate because we are called to be by our faith,” he said. “Our Lord Jesus Christ calls us to welcome the stranger. In the face of the migrant, we see the face of Christ.”

Sister Norma Pimentel, a member of the Missionaries of Jesus, who is executive director of Catholic Charities of the Rio Grande Valley in the Diocese of Brownsville, Texas, was honored at the conference with the Harry A. Fagan Award for her work as an advocate for immigrants and refugees.

Sister Pimentel shared some of her experiences in working with her local community to care for migrants coming across the border.

She recounted one instance where after she prayed with unaccompanied children in a detention center, she was approached by a guard who told her: “‘Thank you, Sister; you made us realize they’re human beings.”

“We cannot lose our humanity in the process of doing our job,” she reminded the conference participants.

Sister Pimentel also urged them to “hold each other accountable” in their ministries and their respect for all life.

“We must join forces,” she added, “and not attack one another but find common ground, to be one community that speaks up and defends life.”

Petersen writes for the Intermountain Catholic, newspaper of the Diocese of Salt Lake City.

NEXT: More bishops issue statement against Trump tweets on Baltimore