Disrespect for life, lack of moral center seen as factors in gun violence 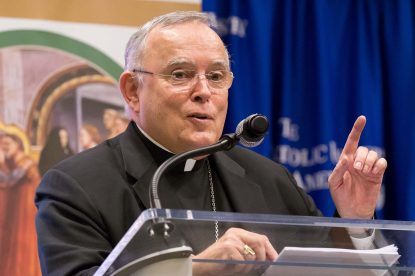 WASHINGTON (CNS) — In this American age of violence, where 165 shootings happened this year alone, where politicians scream at each other across the aisle about gun laws and Second Amendment rights without even the common ground of mutual respect, religious leaders, scholars and TV personalities alike notice a more insidious problem with American culture.

The problem behind the problem, they suggest, is a pervasive disregard for the sanctity of life.

On Aug. 5 in CatholicPhilly.com, Philadelphia Archbishop Charles J. Chaput republished a statement he had given before the U.S. Senate as testimony in response to the Columbine High School shooting 20 years ago in Colorado, when he was archbishop of Denver.

He paired it with a current response to the shootings in Gilroy, California, in late July and in El Paso, Texas, and Dayton, Ohio, in early August, which left a total of 34 people dead and dozens more injured.

“The real problem (of Columbine-like violence in our culture) is in here, in us,” Archbishop Chaput said before the Senate in 1999. “In the last four decades, we’ve created a culture that markets violence in dozens of different ways, seven days a week. It’s part of our social fabric. … When we glorify and multiply guns, why are we shocked when kids use them?”

Robert George, director of the James Madison program in American ideals and institutions at Princeton University, tweeted along similar lines:

“People have lots of motives for killing other people — greed, envy, ideology, hatred, racism, nihilism, and on and on. Sometimes people kill others simply because they are in the way. Only one thing can overcome all motives to kill: the conviction that every human life is sacred.”

Archbishop Chaput went on to explain that disrespect for life is stained into the fabric of American culture, through abortion, the death penalty, assisted suicide — currently legal in eight states and the District of Columbis — violent video games, disrespect for the elderly and morbid fascination with the bloody details of each new shooting. The list goes on.

Even Oprah Winfrey chimed into the discussion. She attributed the atmosphere of hatred and violence to a lack of individual morality.

“Churches used to do that. … It was a central place you could come to and there was a core center of values about a way of living and being in the world,” she said in an interview with Extra. “Until we can return to that, however that is, in whatever form, we will continue to be lost.”

Archbishop Chaput said that gun control is not going to solve this cultural problem. Rather, he suggested that America needs to radically shift its perception of life, to rid its culture of the hatred, dishonesty, excess, moral anarchy, and perversion that have characterized this uniquely bloody period in U.S. history.

“What is different now is the culture of hate that has been developing over the last few years,” he said. “Whether it is expressed in the violence of white nationalism or violence against the defenseless unborn, hate seems to be an accepted way of life.”

However, he added the strong caveat that, in addition to addressing this cultural immorality, government leaders should institute a ban on assault weapons, implement universal background checks and criminalize gun trafficking immediately.

Archbishop Chaput said exterior measures would have minimal effect controlling the situation and that any real solutions must confront the core of a rotting culture.

“Treating the symptoms in a culture of violence doesn’t work,” he said, “We need to look deeper. Until we’re willing to do that, nothing fundamental will change.”

NEXT: Bishops reflect on abuse crisis on anniversary of Pa. grand jury report