Faith was there ‘in darkest moments,’ said El Paso priest after shooting 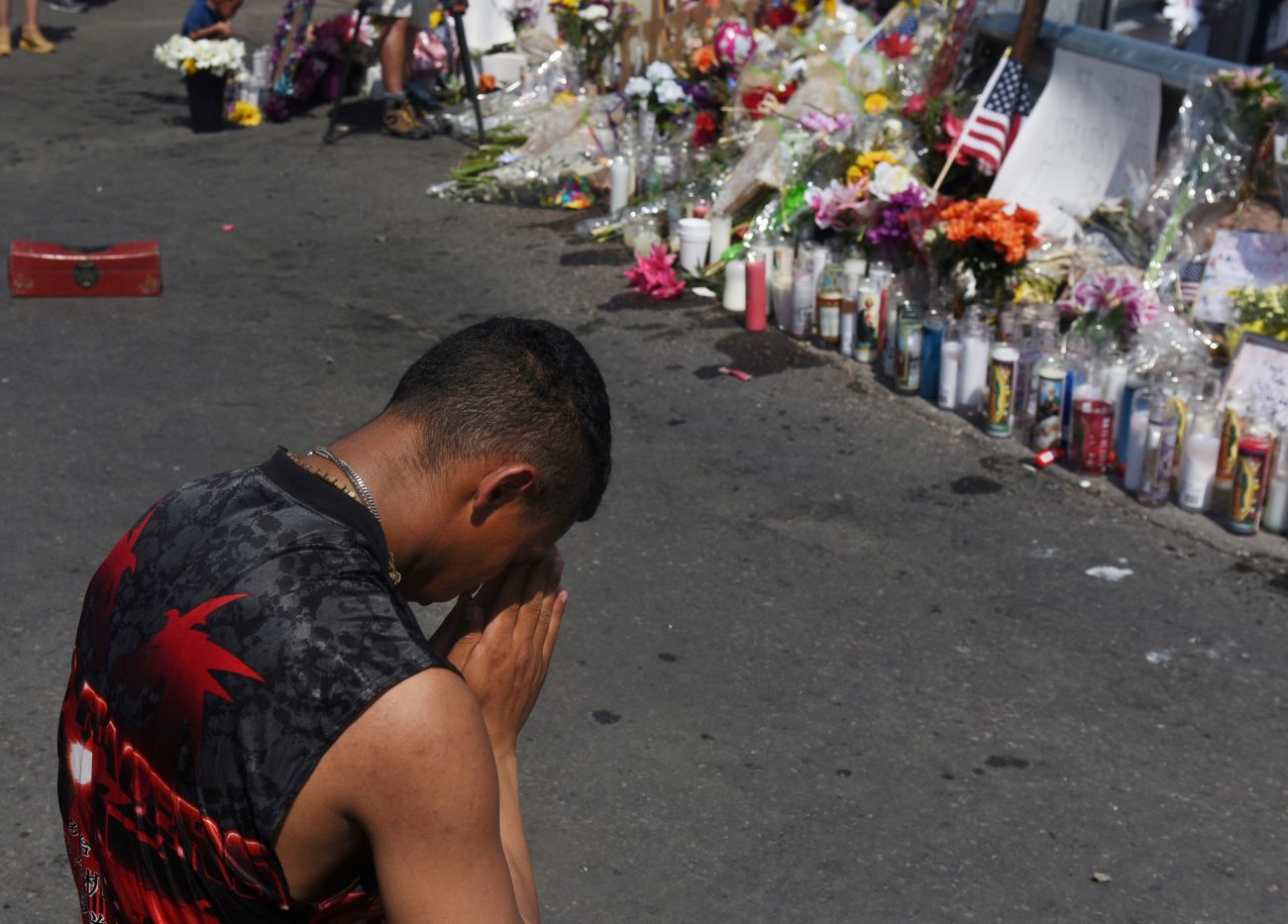 A man prays at a memorial Aug. 6, 2019, three days after a mass shooting at a Walmart store in El Paso, Texas. (CNS photo/Callaghan O’Hare, Reuters)

WASHINGTON (CNS) — In upcoming days, Father Fabian Marquez plans to attend 17 funerals. He will officiate one and attend the other 16, including one in Chihuahua City in Mexico.

He is connected to all of them — for people who died in the Aug. 3 mass shooting at the El Paso, Texas, Walmart — because he was there when members of each of these 17 families heard the news that their loved one died in the gunfire. In all, 22 people just going about a normal routine that day were killed by a 21-year-old who may face hate crime charges in addition to capital murder charges.

These families waited hours — into the night and then into the next day — to find out about their missing family members at the MacArthur Elementary-Intermediate School in El Paso, which was set up as a reunification center.

Father Marquez, pastor of El Buen Pastor Catholic Mission, (Church of the Good Shepherd) in Sparks, Texas, said the priests in the El Paso Diocese were urged by Bishop Mark J. Seitz “to be present” to the community.

He first went to the local hospital and then to the reunification center where he stayed from 1 p.m. Aug. 3 until about 5:30 p.m. the next day. Some slept during the night in the school building, but mostly they just waited, anxious to hear about friends or family members.

Father Marquez didn’t sleep. He said the initial crowd thinned as people were gradually reunited with their families, but by the next morning, those who remained were tired, frustrated and growing more fearful.

At 10 a.m. the next day when the tensions and emotions were high for those who had not received news, he suggested that the group, several of whom were Catholic, have 30 minutes of prayer together, especially since it was a time when many people across the city would be at their respective churches.

When they prayed, joined by some of the police officers who were at the center, he told them the moment was akin to when the apostles were hiding after Jesus’ crucifixion.

“They were hurt, just like we are, and he showed up and said peace be with you,” the priest said he told the group, stressing: “We need peace now in our community … we need peace to change this tragedy.”

He said everyone hugged each other, which they hadn’t done in their almost 24 hours together, and he said that peace was a visible sign of the power of prayer and of faith which in turn helped them cope with tragic news they would later receive.

“It was emotionally hard and heartbreaking” to tell families news they didn’t want to hear, but Father Marquez felt it was important to be there to “minister to those suffering most.”

“In the darkest moments our faith was with them; it’s what we do as Christians,” he told Catholic News Service Aug. 7.

When Father Marquez finally left the reunification center, he went home and then to an interfaith prayer service before finally returning home after midnight to catch up on a little sleep.

The priest, born and raised in El Paso, said no one from his parish died in the shooting but many of his parishioners knew the youngest person killed in the Walmart shooting: Javier Amir Rodriguez, a 15-year-old avid soccer player from a Catholic family who was just about to start his sophomore year at Horizon High School in El Paso.

Rodriguez was at Walmart that day with his uncle about to get things for school. The two were standing in line at a bank inside the store when the gunman opened fire. Rodriguez’s uncle was shot in the foot and is in stable condition.

In the days since the shooting Father Marquez has been meeting with families and helping to plan funerals and memorials. When he spoke to CNS, he was at the site of the memorial at the El Paso shopping center to pray and be with people.

“There is a lot of pain, hurt, tears from early in the morning until night,” he said. He said people have left rosaries and prayer cards and are ministering to others and crying with each other.

“Our community needs to be strong together,” he said before adding: “We will be strong because God is with us.”

PREVIOUS: Violent video games factor in violent behavior but not seen as sole cause

NEXT: Kings Bay Plowshares tell court why they acted to disarm submarine base