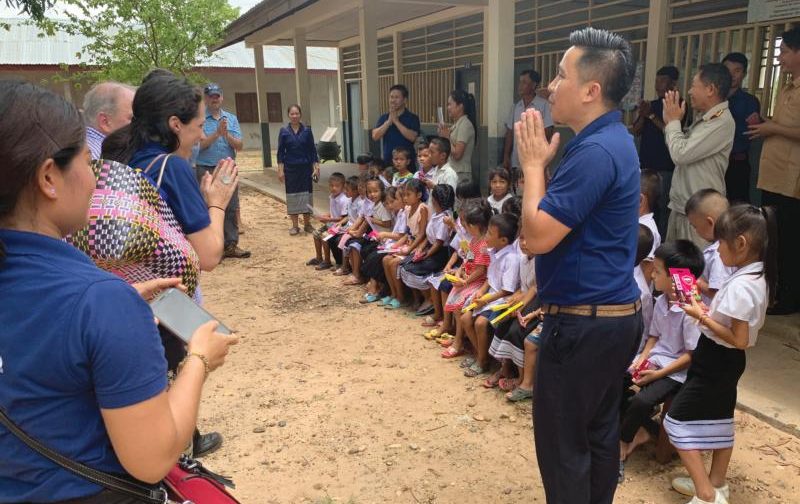 Vatvisa Keosalivong of Catholic Relief Services talks during a June 2019 visit to a school in Laos after CRS gave the students school supplies. Archbishop Bernard A. Hebda of St. Paul and Minneapolis and Michael Wenger of Nativity of Our Lord Parish in St. Paul, and his father, Brian Wenger, joined CRS on the trip to Southeast Asia with other local Catholics June 22-30. (CNS photo/Liam Moran, Catholic Relief Services)

ST. PAUL, Minn. (CNS) — When Michael Wenger of Nativity of Our Lord Parish in St. Paul served lunches to hungry elementary school students in Laos, he knew exactly why he had accepted an invitation to join a trip to Southeast Asia with other local Catholics.

Wenger — joined by his father, Brian Wenger, Archbishop Bernard A. Hebda of St. Paul and Minneapolis and three other local Catholics — learned during the Catholic Relief Services-sponsored trip that the food the agency and its partners provide is critical to keeping the students nourished and in school.

He said he was glad to witness the difference CRS, the U.S. bishops’ international relief and development agency, is making in the lives of people in impoverished communities worldwide.

“I thought that was beautiful, just being able to be with (the students),” said Wenger, 24, who came away from the June 22-30 journey pondering the possibility of someday working for a relief agency such as CRS. “I was kind of entranced in the moment” while serving lunches of rice and vegetables.

Later in the trip, the contingent visited the Lao Disabled Women’s Development Center in the capital of Vientiane. There the group saw women learning and using skills to help earn money to support themselves and their families. Some of the dozens of women at the center had been maimed by explosives or landmines that date to the military conflicts of the 1970s.

Among its projects, CRS provides monetary support and, in some cases, staffing to organizations such as the center.

Another person on the trip, Liam Moran of Our Lady of Grace Parish in Edina, said he wanted to learn more about CRS, and he “jumped at” the chance to go to southeast Asia.

Moran, 34, was invited by his father-in-law, Steve Sefton, who also joined the excursion. He said his exposure to CRS had been limited to the agency’s Lenten Rice Bowl campaigns during his childhood in Anchorage, Alaska.

Also joining the trip were Tony Pohlen, who works for CRS and is a member of St. Frances Cabrini Parish in Minneapolis, and Sean Callahan, CRS president and CEO.

Brian Wenger said he was motivated to travel to Asia after joining the CRS board in January. He is a friend of Archbishop Hebda; the two met when Wenger served on the Archdiocesan Finance Council.

Archbishop Hebda also serves on the CRS board, and is one of four Minnesotans among its 25 members.

The elder Wenger was so excited about the trip that he invited his five oldest children to join him and was thrilled that Michael accepted his invitation.

“I think it’s good for family members to experience the charitable work of the church around the world,” Brian Wenger told The Catholic Spirit, newspaper of the Minnesota archdiocese. “The vast majority of people in Cambodia and the vast majority of people in Laos are not Catholic, and yet we’re called to help all of our neighbors. And, that’s what Catholic Relief Services does.”

“Being on the CRS trip and seeing the work they do really opened my eyes,” he said. “It’s not as if I didn’t understand there were problems that existed in these parts of the world. I certainly was aware of that. You just have a different sense of it when you go and encounter them face-to-face.”

Hrbacek is photographer/reporter at The Catholic Spirit, newspaper of the Archdiocese of St. Paul and Minneapolis.