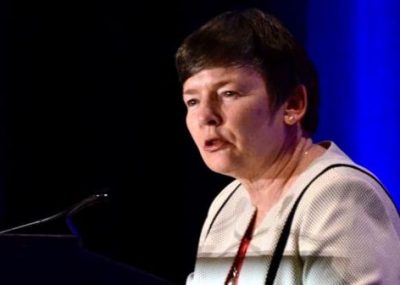 SCOTTSDALE, Ariz. (CNS) — Holy Cross Sister Sharlet Wagner loves theme parks, especially roller coasters — which is a good thing, she said, because religious life is often like the rides that “throw us onto our backs, turn us upside-down, lead us to scream and to laugh and sometimes to mutter, ‘This is crazy. Why am I doing this?'”

Despite the twists and turns of a world filled with hateful rhetoric and political division, a church beset by a decades-long abuse scandal and the diminishing number of women religious, Catholic sisters are called to stand together and be models of hope, Sister Wagner said in her Aug. 15 presidential address to the Leadership Conference of Women Religious’ annual assembly.

“Religious life has a prophetic role in the church that we must claim and exercise, and in exercising that prophetic call, we are stronger when we are able to discern and lift our voices together,” she said. “The signs of our times reveal a particular call in our day to reach across borders to nurture and strengthen our global sisterhood.”

A troubled planet is depending on sisters, said Sister Wagner, who is her congregation’s first councilor and was completing her one-year term as LCWR president.

Sister Wagner said the hope sisters carry is not naive but is “rooted firmly in reality and trusts confidently in God.”

That hope must extend to the issue of the rapidly declining number of women religious in the United States, she said, noting that sisters are often told there are many forces at work and the decline “is not your fault.”

But that presupposes the shifts taking place are bad, Sister Wagner said.

“I do not say that these shifts are not painful, but it is possible for a situation or experience to be painful, even excruciatingly painful, and not be wrong,” she said.

“I do not pretend to understand all that is occurring with and within religious life today, but I know that God is good and I know that God’s goodness continues to pour forth within and through our sisters and our congregations. … We are called to walk this path in the most authentic, faith-filled and passionate ways that we can, and to enter into the utter madness and mystery of it all.”

It is LCWR members’ responsibility as leaders to be models of hope for their communities, Sister Wagner said.

“Part of our task as leaders is to help our congregations be realistic about our demographics without being defeatist,” she said. “Those of us whose congregations are dealing with completion particularly know what it means to embrace reality with passion and courage and with a deep-down faith in the God who continues to call and guide us. When we understand that our witness is at least as important as our work and that neither our witness nor our work is dependent upon age and numbers, then we can look reality in the face and smile at it.”

While the demographics of religious life show a steep decline in numbers of Catholic sisters in the United States, they also show ever-increasing diversity, another challenge sisters must face head-on, Sister Wagner said, and not give up when it becomes difficult.

She said sisters around the world must also address the deep loneliness frequently expressed by younger sisters, who want to belong and be valued for what they can contribute.

Sister Wagner also told the assembly’s attendees they must face down the national and global rise of hatred and nationalism and fight the results of that rhetoric. Her address came one day after the assembly voted overwhelmingly to send an open letter to President Donald Trump urging him to end his divisive rhetoric.

Sisters also must fight policies based on hatred, she said.

“Our hearts have broken for our immigrant friends, our sisters and brothers who no longer feel welcome or even safe in their adopted home. For American citizens born and raised here, who are told to go back to where they came from,” Sister Wagner said.

“For children who live each day in fear that ICE (Immigration and Customs Enforcement) will come and Mom and Dad won’t be there when they get home from school. For desperate families fleeing poverty and violence who are met at the border with inhumanity and cages.”

Sister Wagner was succeeded as president by Sister Jayne Helmlinger, general superior of the Sisters of St. Joseph of Orange, who was chosen president-elect at the 2018 assembly.

In an interview in advance of this year’s assembly, Sister Helmlinger told Global Sisters Report: “I love to connect people to our (her congregation’s) mission: ‘I don’t care what religion you come from; here is ours, and it’s all about the healing ministry of Jesus.'”

PREVIOUS: Is it time for regional synod for U.S. church to address abuse crisis?

NEXT: LCWR award recipient embraces ‘holy chaos’ of her ministry to migrants