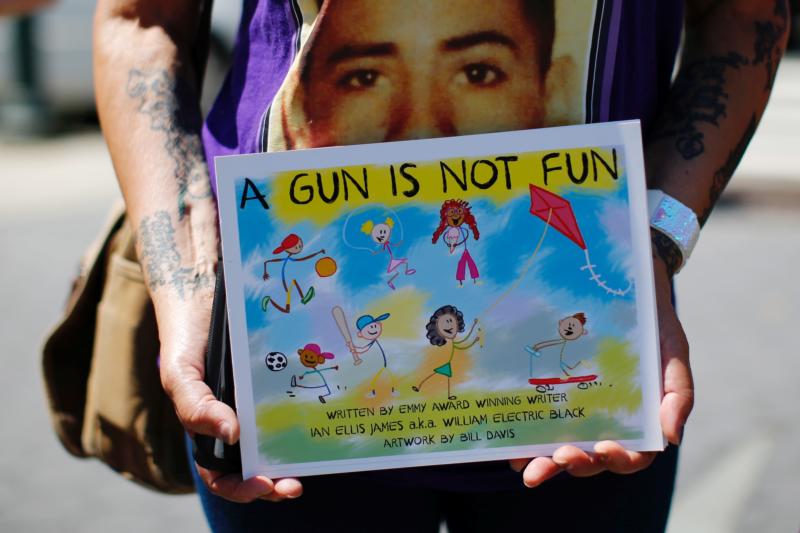 WASHINGTON (CNS) — After the mass shooting that killed 17 people at Marjory Stoneman Douglas High School in Parkland, Florida, Feb. 14, 2018 — this century’s Valentine’s Day Massacre — students who survived the attack have made the case for stricter gun laws, organizing under the banner March for Our Lives.

On Aug. 21, March for Our Lives issued a 4,400-word policy platform, with the key word being “Change,” the word serving as an acronym for each of the six points the organization wants to see enacted.

— Change the standards of gun ownership, which includes a national licensing and registry system, a ban on assault weapons and high-capacity magazines, policies to disarm gun owners who pose a risk to themselves or others; and a national gun buyback program to cut the number of firearms in circulation by 30%.

— Halve gun deaths within 10 years, which March for Our Lives characterized as “declare a national emergency around gun violence and announce an audacious goal to reduce gun injuries and deaths by 50% in 10 years, thereby saving up to 200,000 American lives.”

— Accountability for the gun lobby and industry, which includes reexamining the Supreme Court’s interpretation of the Second Amendment in the District of Columbia v. Heller case, which allows individuals to legally bear firearms without requiring service in a militia, plus initiating both Federal Election Commission and Internal Revenue Service investigations into the National Rifle Association.

— Name a national director of gun violence policy who reports directly to the president and works on gun issues with the Bureau of Alcohol, Tobacco, Firearms and Explosives, the Department of Health and Human Services, and the Centers for Disease Control — including a $250 million “down payment” to the CDC on research into gun violence.

— Empower the next generation through automatic voter registration at age 18, and the creation of a Peace Corps-styled “Safety Corps” for gun violence prevention. “Younger generations are disproportionately affected by gun violence,” March for Our Lives said. “They should have a say in how their country solves this epidemic.”

The U.S. bishops’ own pronouncements on America’s gun culture — and the changes the bishops seek — do not have the specificity of March for Our Lives. But the bishops have argued for stricter gun measures in the United States since before the Parkland survivors were born.

Commenting on gun violence in their 1990 statement “New Slavery, New Freedom: A Pastoral Message on Substance Abuse,” the bishops said: “The widespread use of handguns and automatic weapons in connection with drug commerce reinforces our repeated ‘call for effective and courageous action to control handguns, leading to their eventual elimination from our society.'”

In 1994’s “Confronting a Culture of Violence: A Catholic Framework for Action,” the bishops declared: “While acknowledging the Second Amendment of the U.S. Constitution and related jurisprudence, we live in a fallen world with daily advances in modern technology. Some weapons are increasingly capable of easily causing mass murder when used with an evil purpose. Society must recognize that the common good requires reasonable steps to limit access to such firearms by those who would intend to use them in that way.”

Congress passed a 10-year ban on the purchase of assault weapons that year. The ban expired in 2004.

The bishops also called for “an advocacy strategy which moves beyond the often empty rhetoric of national debate,” in which “curbing the easy availability of deadly weapons;” was second only to “confronting the violence of abortion.”

A pastoral message from 2000, “Responsibility, Rehabilitation, and Restoration: A Catholic Perspective on Crime and Criminal Justice,” found the bishops saying: “We support measures that control the sale and use of firearms and make them safer — especially efforts that prevent their unsupervised use by children or anyone other than the owner — and we reiterate our call for sensible regulation of handguns.”

In a footnote to that passage, the bishops added: “We believe that in the long run and with few exceptions — i.e., police officers, military use — handguns should be eliminated from our society.”

However, in this millennium, this century, and this decade, as the number of gun-based attacks within the United States increased in frequency and deadliness, so too did remarks by the bishops and those who work enacting their policy priorities.

One week after the Sandy Hook Elementary School massacre in which 20 young students and six adults were murdered, three bishops who were the chairmen of their respective U.S. Conference of Catholic Bishops committees laid out a plan of action. March for Our Lives’ 2019 agenda had six priorities; the Dec. 21, 2012, statement from the three bishops had five:

Support measures that control the sale and use of firearms; support measures that make guns safer, “especially efforts that prevent their unsupervised use by children and anyone other than the owner”; call for sensible regulations of handguns; support legislative efforts that seek to protect society from the violence associated with easy access to deadly weapons including assault weapons; and “make a serious commitment to confront the pervasive role of addiction and mental illness in crime.”

Two months later, in written testimony to the Senate Judiciary Committee, the USCCB said: “The church has been a consistent voice for the promotion of peace at home and around the world and a strong advocate for the reasonable regulation of firearms. Simply put, guns are too easily accessible.”

The testimony noted that Bishop Stephen E. Blaire, then the chairman of the USCCB Committee on Domestic Justice and Human Development, joined 46 other national religious leaders in signing the letter of “Faiths United to Prevent Gun Violence” which urged Congress to support policies to require universal background checks for all gun purchases, limit civilian access to high-capacity weapons and ammunition magazines, make gun trafficking a federal crime, and improve access to mental health care for those who may be prone to violence.

“There are countless examples: Columbine, Virginia Tech, mall and cinema shootings in Oregon and Colorado, the assassination attempt on Congresswoman Gabrielle Giffords, terrorist attacks in many countries, and the recent attack and killing of hostages by terrorists in Algeria,” said a USCCB Department of Domestic Social Development backgrounder issued that month, “Confronting Armed Violence and Promoting Peace.”

The backgrounder cited the Vatican’s Pontifical Council for Justice and Peace 2006 document, “The International Arms Trade,” which emphasized the importance of enacting concrete controls on handguns and said: “Limiting the purchase of such arms would certainly not infringe on the rights of anyone.”

A bill that would have strengthened background checks garnered the votes of 54 senators two months after the Sandy Hook shooting, but 60 yes votes were needed to break a filibuster.

“Violence in our society will not be solved by a single piece of legislation, and many factors contribute to what we see going on all around us. Even so, our leaders must engage in a real debate about needed measures to save lives and make our communities safer,” said Bishop Frank J. Dewane of Venice, Florida, current chair of the USCCB Committee on Domestic Policy, after massacres in 2017 killed 58 at an outdoor music concert in Las Vegas and 27 — including an unborn child — at a Baptist church in Sutherland Springs, Texas.

“We live in a fallen world with daily advances in modern technology. Some weapons are increasingly capable of easily causing mass murder when used with an evil purpose,” Bishop Dewane said. “Society must recognize that the common good requires reasonable steps to limit access to such firearms by those who would intend to use them in that way.”

A second USCCB Deptartment of Social Development backgrounder, from February 2018 — not long after the Parkland shootings — recapitulated the bishops’ legislative priorities on guns: a total ban on assault weapons, universal background checks for all gun purchases, limits on civilian access to high-capacity weapons and ammunition magazines, a federal law to criminalize gun trafficking, improved access to — and resources for — mental health care and earlier interventions, regulations and limitations on handgun purchases, gun locks to prevent their misuse, and “an honest assessment of the toll of violent images and experiences which inundate people, particularly our youth.”

It added, “The USCCB also supports recent proposals to set a more appropriate minimum age for gun ownership, and to ban ‘bump stocks.’ In addition, the USCCB supports wholistic measures, such as the promotion of mercy and peacebuilding in our communities through restorative justice policies and practices, ongoing encounters and discussions at the parish level regarding violence in communities.”