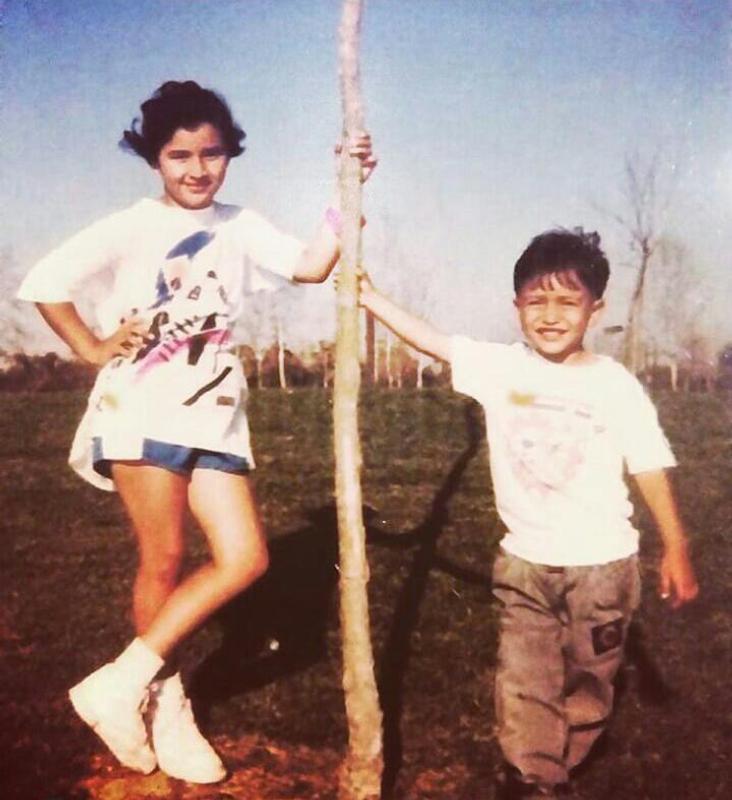 Bessy Jovel and her brother Johnny appear in this photo taken in 1990 after having been reunited their father in California. Bessy was 8 and Johnny was 2 when they made the almost 2,000-mile journey from their native El Salvador with their mother, who yearned to have her family reunited. (CNS photo/courtesy Bessy Jovel)

WASHINGTON (CNS) — Bessy Jovel takes deep breaths, sometimes gentle gulps to talk about the trip of almost 2,000 miles she made as an 8-year-old from El Salvador to the U.S.-Mexico border almost 30 years ago.

“This is a little difficult to talk about,” said Jovel, now in her 30s and a professional who works in Catholic Church nonprofit circles in El Salvador.

Back then, in 1990, she traveled across three countries, sometimes on foot, sometimes in cargo trucks, sleeping in stuffy warehouses and banana fields, hungry and sweaty, en route to the border with her mother and almost 3-year-old sibling Johnny.

She wanted to see her father. Her mother wanted to see her husband. The family hadn’t seen him since shortly after Johnny’s birth, when he left El Salvador seeking work not available in the country then at war.

The family separation was untenable for the parents who wanted the family to be together, but they lacked a legal path to do so.

Back then, children crossed the U.S.-Mexico border in far fewer numbers than today. But the peril of the journey, whether fleeing war, persecution or economic hardship, has remained a constant as evidenced by the late June drowning of a Salvadoran father and his almost 2-year-old daughter in the Rio Grande near McAllen, Texas. If she closes her eyes, Jovel said, she can almost remember the moment when the same fate almost befell her and Johnny as her mother tried to cross the same river with them.

After seeing the photo of Oscar Alberto Martinez Ramirez and his 23-month-old daughter, Valeria, lifeless on the river bank, Jovel spoke to Catholic News Service June 30 via WhatsApp. She wanted others to know, she said, about the perils of the journey from a child’s perspective, but also wanted to remind those who criticize parents who have taken children on the journey to be “more human” toward them and accept that “not everyone is born with the same opportunities.”

Her experience began Jan. 4, 1990, a time when mostly adults, including many soldiers, were streaming out El Salvador, fleeing the war. She and Johnny were the only children in a group of migrants that often walked and sometimes traveled on trucks “like cattle,” through Guatemala and Mexico, carrying water where they could, along with one change of clothes.

The trip for each migrant is a singular experience, she said, with some reporting that it’s an easy trip that can take as little as five days but, for her family, it was a difficult one that took almost a month, as they were a few times turned in to authorities, going back and forth across borders, and perhaps slowed down by the shorter steps of a child.

Some of her uncles and an aunt came with them, encouraging them during difficult moments for any child — to keep moving when hungry and tired, to be silent at a checkpoint when officials poked with sharp objects the cargo trucks they traveled in as they made their way north, and even picking off a colony of ticks that appeared on their scalp.

“We never imagined (the trip) would take us on such difficult moments, adverse situations,” said Jovel.
She doesn’t remember all the dates and places, but there were moments she’ll never forget and one of those came Jan. 15, 1990.

“We had to sleep in banana fields, and, in the distance, you could hear animals,” which some of the travelers said were hyenas or wolves, she recalled.

The “coyotes,” the name many Latin Americans use to refer to human traffickers, covered the group with a black piece of plastic. She and Johnny were resting on the ground next to their mother when Jovel remembers she heard her aunt whisper to her mother, “Happy birthday.”

“And there we were, living that moment, in difficulty, not knowing if we were going to make it to see the dawn, if the animals came anywhere near us,” she said.

Though she doesn’t know the specific path they took, she remembers traveling from warehouse to warehouse, a place that signified safety, only because it meant authorities weren’t likely to find their group there. But safety is relative. The spaces had no ventilation, no food or water, and the migrants were forced to stay inside, even if it meant they had to do their “necessities” in the confined space, she said.

“Some complained because my brother cried a lot,” she said.

Now and then, a local denizen who spotted the group would approach and offer them tortillas and water.

“They were so generous, may God bless them,” Jovel said. “We never knew their names or why they did it.”

Some of it she attributes to the prayers of her grandmother, “a devotee of the sacred hearts of Jesus and Mary,” she said. She was a woman who constantly prayed for her family during their journey and never failed to attend Mass asking for divine intercession. During part of the journey, Jovel said, she remembers seeing a light “that never left us.”

“Now I understand that they were the prayers of my grandmother and all those people who would pray for us, for our journey, so that all would end well, that God would be with us and that’s the way it turned out.”

Along that path, she and her brother never lacked the security found in their mother’s arms, she said, which was “always a place of refuge.” But that security was shaken when their mother fell ill just before they reached the border. The traffickers separated them from their other family members and their mother developed a high fever. Not knowing whether she would live, she advised her that if something happened, to grab her brother’s hand and keep going.

A few days later, however, the mother was able to make it to the Rio Grande, near McAllen. But during the crossing, the water began rising to her neck and she couldn’t grab on to her children. Some men, who Jovel believes were soldiers leaving the war, grabbed for them and carried them on their shoulders. Looking back on what happened to the Salvadoran father and his daughter, “that could have been us,” she said.

Even after the perilous journey, the family ended up separated. Jovel could not adjust to life in the U.S. after being bullied at school. Three years after the trip, she begged her parents to let her return to live with her grandmother.

Jovel has since lived in El Salvador with her father and a sister born to the family after Johnny. She works at a nonprofit founded by a Franciscan priest. Her father also lives there and is waiting to enter the U.S. to join his wife, who lives in California. Johnny also lives in the U.S. and is now a citizen.

Depending on immigration law in the U.S., they all hope to be able to live in the same place one day, she said.

“And we hope we don’t have to wait until heaven (to live together), but a little bit before then,” she said. “The idea is that where one of us goes, the rest will follow.”

PREVIOUS: The Real Presence: What do Catholics believe and how church can respond