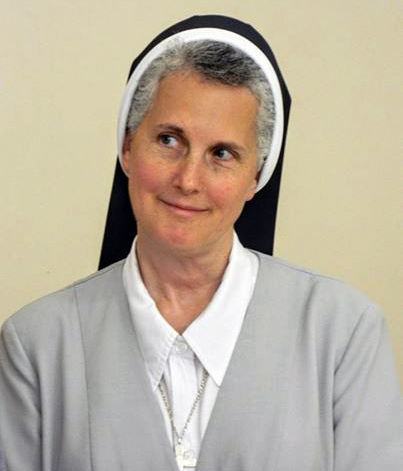 When Sister Angela Marie Mazzeo, C.S.F.N., was growing up in St. Christopher Parish in Northeast Philadelphia, it would not have crossed her mind that someday she would lead an international religious congregation.

But here she is today, newly elected on Aug. 9 to a nine-year term as superior general of the Rome-based Sisters of the Holy Family of Nazareth.

She was born in 1966, the eldest of the two children of Dianne and Dominic Mazzeo and from third grade on attended St. Christopher School where she was taught by the Religious Sisters of Mercy. This was followed by Archbishop Ryan High School where she encountered several religious congregations.

While her family was Catholic, they weren’t particularly regular churchgoers, but as we know from the Gospels, Jesus doesn’t worry about the details when he says, “Come, follow me.”

It was while she was a senior in high school that the thought first came to her that perhaps she should become a nun. It wasn’t a strong pull, as there were other possibilities too.

She entered Temple University as a full-time student and working part time. First she was an accounting major but soon switched to pre-med. It didn’t take too long for her to realize how all-consuming medicine would be if she became a doctor.

“If I were to become married with a family, I did not want a career that took all of my time and energy,” she said.

It was a lab partner in biology who was studying to be a pharmacist who suggested she should switch to that major, which she did. After graduation she began her career as a pharmacist.

Meanwhile Angela had been briefly engaged to be married. But through it all, that nagging little pull toward religious life never totally went away.

She had confided this to a Holy Family Sister, Sister Eileen McGovern, who was also studying at Temple. “I wasn’t seeking a congregation, I was just trying to decide,” she said. Sister Eileen invited her to different religious functions and gave her encouragement, but not pressure.

Angela liked what she saw, especially the Holy Family Sisters. As a congregation founded in 1875, they are headquartered in Rome but their roots are in Poland, where their foundress Blessed Frances Siedliska was born. They are now established in 15 countries, including the United States.

Locally they minister in education and health care especially in her own backyard, Northeast Philadelphia. They conduct Holy Family University, Nazareth Academy High School, Nazareth Academy Grade School and several parochial schools, and serve at Nazareth Hospital in the city.

Angela’s first tentative step was becoming an affiliate Sister of the Holy Family in 1990. It really was a big step, and although her family worried, “They didn’t disapprove, it was just concern,” she said.

Indeed she was not absolutely certain this was something she could do, and did not enter with finality until 1992. “I felt God was calling me; it is that pure and simple,” Sister Angela Marie said.

After her formation the congregation used to advantage her profession as a pharmacist and assigned her to the pharmacy at Nazareth Hospital. Over 15 years she rose from staff pharmacist to pharmacy director.

Her demonstrated administrative skills were recognized to the point that in 2010 she was elected as a councilor on the congregation’s General Administration in Rome. The past nine years have been quite busy for her, often visiting the far-flung missions of the congregation around the world.

“All the pages in my passport are filled. I’ll have to get some more added,” she said.

Now Sister Angela Marie is beginning her term Superior General and there will be challenges. The Sisters of the Holy Family of Nazareth have not been immune to the changes that have affected religious life in recent decades. Yes, their numbers are down, perhaps not as far as many other congregations but down, nevertheless.

“We have closed some houses but open up others,” Sister Angela Marie said. “Our call, our charism, is needed — bringing God’s love to the family.”

Whatever the future, as superior general Sister Angela Marie sometimes thinks God could have chosen somebody wiser, more holy, more diligent to head the congregation. But he has also given her the crosses and privileges that made her who she is, and he will be with her.

“It’s humbling,” she said. “I know that the fulfillment of this role is possible only through God’s grace and the gifts of the Holy Spirit.”

NEXT: New head of local St. Joseph’s Sisters has served most vulnerable youths