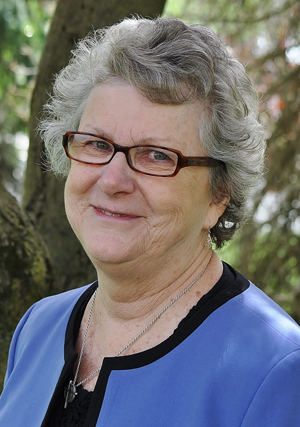 Sister Maureen was raised in a large Catholic family of eight children in St. Charles Borromeo Parish in Drexel Hill, and after her graduation from Archbishop Prendergast High School she attended Peirce College for a year before entering the St. Joseph Sisters.

She was not certain at that point that this was indeed her vocation, but “God called me to try them,” she said. She entered the St. Joseph Sisters specifically because those she knew “were so joyful in their ministry,” she said.

She entered with a band of 48 young women, of which 17 are still members of the congregation. Her first assignment was as a teacher at the former Holy Souls School in North Philadelphia. There she taught sixth grade and still gets together with some of her former students from the mostly African American school.

From there in 1976 she went on to the Catholic Home for Girls where she stayed until 1989, rising to the position of administrator. Actually it was an assignment she asked for. She had filled in there as a summer assignment and really enjoyed the work, although it was challenging.

The girls who by then were in group homes, were in their teens and many of them had experienced abuse — physical, mental or sexual — and Sister Maureen considered it a mission from God to serve them in their needs.

In 1989 she was asked to join the administrative staff at archdiocesan Catholic Social Services as director of Professional Services, where she served until 1997.

After that she worked with Hospitality House, a Trinitarian-run ministry in West Kensington, working with people struggling with addictions. Most recently she worked with Penn Home Health Care and Hospice in bereavement counseling.

“I’ve had a wonderful career serving people with so many different issues,” Sister Maureen said.

After serving on the General Council of the Sisters of St. Joseph of Philadelphia she now begins a five-year term as president.

Today’s congregation is much different in so many ways than the St. Joseph Sisters she joined a half-century ago. For one thing there is no longer an army of 40 or 50 young women coming in every year. The great challenge is caring for the elderly sisters in their ranks, Sister Maureen explained.

But she is undaunted by numbers. “We came here with just six sisters,” she said.