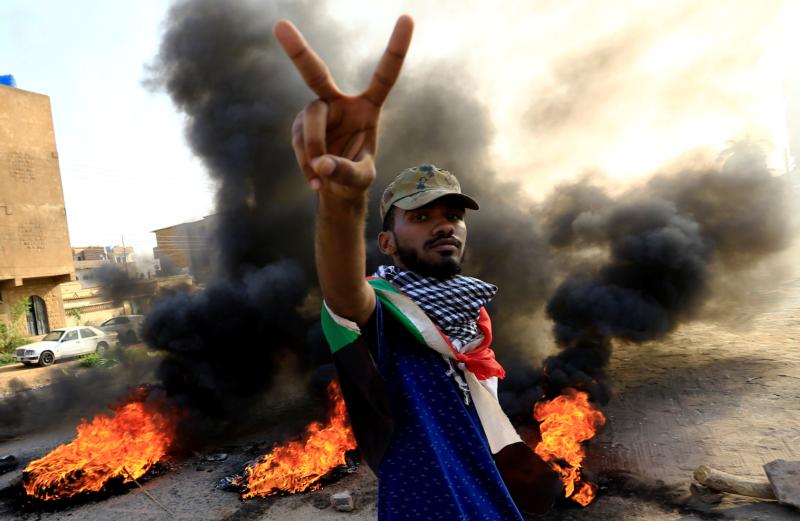 A Sudanese protester gestures during a demonstration in Khartoum July 27, 2019. Bishop Yunan Andali of El Obeid said the country has become too fragile, after months protests in which demonstrators have been pushing for a civilian government. (CNS photo/Mohamed Nureldin Abdallah, Reuters)

NAIROBI, Kenya (CNS) — Sudanese Catholic Bishop Yunan Andali of El Obeid said his country has become too fragile, after months of protests in which demonstrators have been pushing for a civilian government.

The bishop said developments had left most civilians confused, with glaring signs that the ruling Transition Military Council was not ready for a civilian government. He said he feared the council was using tricks to continue the authoritarian rule of ousted President Omar al-Bashir.

“The situation is too fragile; the future is very unclear. This is a country of coups, and anything can happen here,” said Bishop Andali. “(For the) experienced and specialized in our country’s history, the country is back to its rulers, and the revolution lost the track.”

On Aug. 4, Freedom for Change, a body representing the protesters and the council, announced an agreement to form a transitional government. The proclamation, to be signed formally Aug. 17, cut the military council’s participation in the process of transitioning to a civilian government, ended the military leaders’ immunity from prosecution and put the brutal Janjaweed militia under the command of the armed forces.

Six civilians and five military officials will lead the Sudanese government, but Bishop Andali said the current political and constitutional arrangements had left out issues that initially ignited the uprising.

“The economic challenges remain untouched, and the standard of daily life of the people is hard to bear,” said Bishop Andali. “Statements on peace were not part of the new change. … It was mentioned only later, when it seemed an issue for youth from marginalized communities participating in the revolution.”

The bishop said in the 30 years under al-Bashir’s rule, a number of civil servants, army officers and Islamist militants had been empowered and were now taking charge. He said they use the language of those the protesters ousted.

“There is no space left to accommodate or focus on Christian or other minorities’ issues. The international community can help as much, as it knows a little about the root cause of the problem,” he said.

The country had been in turmoil since December, when protests ignited in several cities and towns over rising cost of living and deterioration of economic conditions.

NEXT: Ukrainian archbishop rules out ‘appeasement’ of aggressors in renewed fighting