Christians in northeast Syria appeal for prayer for safety 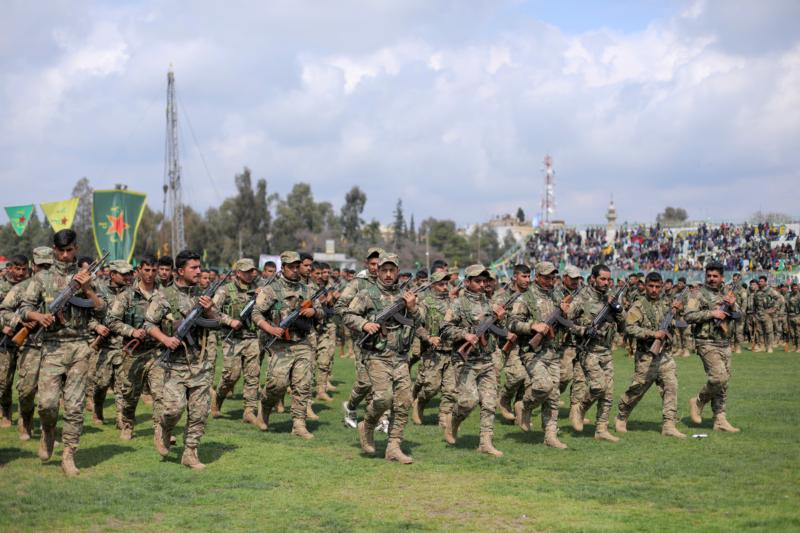 AMMAN, Jordan (CNS) — Groups representing Christians in northeast Syria are appealing for prayer, fearful that Turkey plans to make good its numerous threats to invade the region with its military forces.

Since November 2018, Turkish President Recep Tayyip Erdogan has threatened to launch a large military operation east of the Euphrates River to “clear Kurdish terrorists” from the area. Syriac Christians view it as a pretext to enter more of Syria in a bid to change the northeast’s demographic of Kurds and Christians, just as Turkey did in Afrin, Syria, in March 2018.

The Christians’ appeal was issued by the Syriac National Council of Syria, the Syriac Union Party, and the American Syriac Union. It was made available to Catholic News Service Aug. 15.

Turkey has “massed its army and allied jihadists along the border. Even though the U.S. and French armies are present in northeast Syria, we know that Turkey will attack and destroy us,” the three Syriac Christian groups said. They are appealing to U.S. leaders to intervene on their behalf to aid the 100,000 Christians in the region who they say are at risk.

They warned that Turkey and its jihadist allies, including fighters from al-Qaida and Islamic State, could carry out “a massacre just as they did in Afrin (northwest Syria) in 2018, when the churches of Afrin were burned and the Christians and Yazidis there were hunted down. In northeast Syria, it would be much worse and destroy many more people.”

“This is why we release an urgent call for prayer to all our brothers and sisters. We ask you to pray that the U.S. and France will make the decision to protect northeast Syria from a Turkish invasion,” the statement said.

Syriac Christian political leader Bassam Ishak referred to the 1915 Armenian Genocide, or “Sayfo,” in which 1.5 million Armenians were killed by Ottoman Turks in 1915.

“The Syriacs and Christians of northeast Syria will never forget ‘Sayfo,’ and we don’t feel comfortable with Turkish military power and rule,” said Ishak, who heads the Syriac National Council. A graduate of The Catholic University of America in Washington, he is also a member of the political bureau of the Syrian Democratic Council.

Ishak and Syrian religious leaders like Chaldean Catholic Father Samir Kanoon of Qamishli said the region’s inhabitants view Turkey as an enemy of Christians due to past history.

“From the perspective of the Christians who live in northeast Syria, the old bully is following them into where they came to safety,” Ishak said.

The Kurds and Syriac Christians in the region banded together under the Syrian Democratic Forces to become the U.S. military’s key ally in the fight against Islamic State militants in Syria. Early in the Syrian conflict, which began in 2011, Turkey turned a blind eye to foreign jihadists pouring across its border into Syria to join Islamic State.

Wary Christians also point to the Assyrian Christian villages of the Khabur River Valley, also in the northeast, which were overrun by Islamic State fighters in 2015. The militants kidnapped more than 200 Christians and held them for a year, until millions of dollars raised by the Assyrian community were paid as ransom to Islamic State. Three Christians were killed before the ransom was paid.

“We want whatever happens to secure and protect the religious freedom we have made possible,” Ishak said of the Democratic Self-Administration, which Kurds and Syriac Christians have developed in Syria’s northeast under the Syrian Democratic Forces control. People are free to change their religion, and dozens of Muslims have become Christians.

In the Democratic Self-Administration, inhabitants practice a representative form of governance. Its 2014 mandate also requires that at least 40 percent of representatives in the region are women. The freedom of worship and choice of religious practice there is found nowhere else in the Arab world.

“We want to protect and sustain religious freedom access. This is our model enacted in northeast Syria,” Ishak said. “There is pluralism, a recognition of all ethnic groups, traditions and cultural rights, such as learning mother tongue languages, as well as gender equality afforded to women not seen elsewhere in the region.”

“We have a political system that has provided peace for this region of Syria. It has also provided a vision for the region,” Ishak said.

NEXT: Christ’s love gives hope to forgotten ones, cardinal says