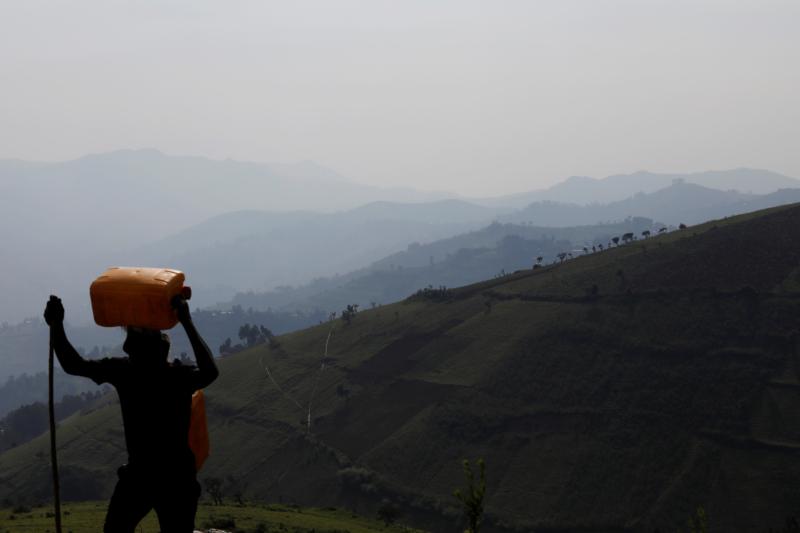 A man carries water in the mountains near Goma, Congo, Aug. 14, 2019. A representative of the Catholic bishops of Congo have called on multinational corporations working in the mineral-rich country to contribute toward local development. (CNS photo/Baz Ratner, Reuters)

KINSHASA, Congo (CNS) — Foreign companies working in mineral-rich Congo ought to contribute part of their profits to local development programs, said an official of the country’s Catholic bishops’ conference.

Msgr. Donatien Nshole, secretary-general of the bishops’ conference, said in a presentation Aug. 16 in Kinshasa that the country’s economy “rests on exploitation of natural resources,” but that the Congolese people have seen few benefits from the extractive industry.

“Instead of contributing to our country’s development and benefitting our people, however, our mineral, petrol and forest resources have become the cause of our misfortune,” he said in discussing reports on the African country’s mining, agricultural and environmental sectors commissioned the Catholic Church’s Episcopal Commission for Natural Resources.

“Our fellow-citizens find themselves stripped of their lands, without any reward or compensation, through concessions and sales made to this or that mine or forest exploiter,” he added.

The reports called for companies to pay between 3.5% and 10% into a new community development fund for reinvestment in roads, wells, schools, hospitals and infrastructural projects to benefit local inhabitants.

The United Nations has confirmed that Congo’s armed conflicts mostly qualified as “economic, predatorial wars,” but that the foreign companies involved in exploiting the country’s resources had signed contacts or made purchases from Congolese politicians and intermediaries.

“Since it’s also Congolese who manage these sectors, we should also ask ourselves who shares the responsibility, especially (since) it’s generally held that the exploitation of natural resources, especially in mining, brings no profit to our population,” said Msgr. Nshole, whose remarks were carried on the bishops’ conference website.

Catholic leaders for years have criticized the exploitation of resources in Congo, where 4.5 million people have been displaced by conflict and a fifth of the population needs basic assistance, according to U.N. statistics.

NEXT: Pope applauds launch of abuse investigation center in Chile