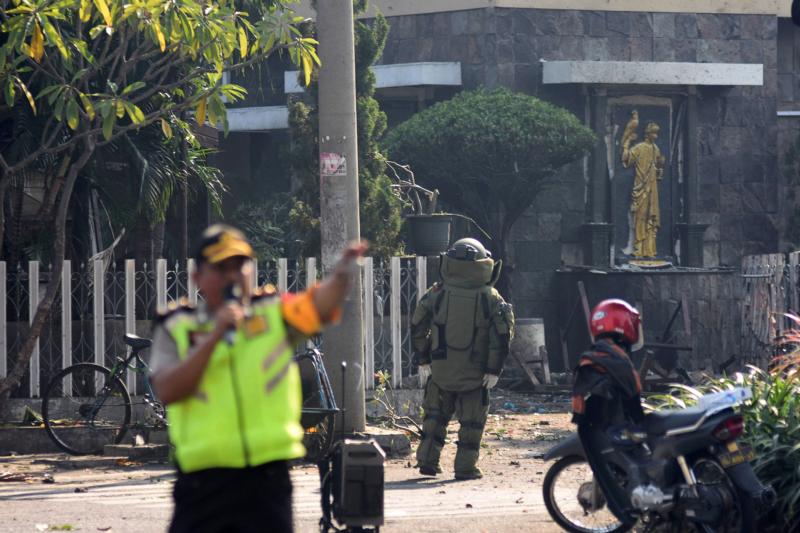 A member of the police bomb squad unit examines the site of a May 12, 2018, explosion outside Santa Maria Catholic Church in Surabaya, Indonesia. (CNS photo/ M Risyal Hiday, Antara Foto via Reuters)

JAKARTA, Indonesia (CNS) — Indonesian police have arrested six terrorist suspects, two of whom have been linked to last year’s bombings at three churches in Surabaya, the country’s second-largest city.

Police spokesman Dedi Prasetyo told reporters during an Aug. 26 media briefing that the arrests were made in mid-August in several locations in East Java province and that all those arrested were members of the Islamic State-affiliated group Jamaah Ansharut Daulah, reported ucanews.com.

The group was behind the suicide bombings at Santa Maria Catholic Church and two Protestant churches May 13, 2018. Nineteen people were killed and dozens were injured after members of a single family, including young children, carried out the bombings.

Another attack on the city police headquarters the following day by another family left at least four dead and 10 injured.

“Both are closely linked to the Surabaya bombings,” Prasetyo told reporters. “At least, they knew of the plan to launch the attacks in Surabaya.”

The arrest of the two cell leaders brings the number of suspects arrested in connection with the Surabaya bombings to more than 200, according to police.

Prasetyo said three other suspects were arrested Aug. 23 in Blitar, while a sixth suspect was apprehended after he allegedly robbed a gold shop in East Java’s Magetan district.

“He claimed to be an ISIS sympathizer and said robbing the gold shop was to get funds to go to Syria,” Prasetyo said.

Stanislaus Riyanta, an intelligence analyst from the University of Indonesia, told ucanews.com that the arrests suggested that JAD remained a significant threat in Indonesia.

“As long as the JAD network is still strong, threats against places of worship remain high,” he said.

The Indonesian government introduced tougher anti-terrorism laws soon after the Surabaya bombings. They grant the police wider powers when arresting and detaining suspected terrorists. Police are allowed to detain suspects for 14 days before charging them with a crime, while pre-trial detention can last up to nine months.

NEXT: Pope: Proclaim God’s love through care for needy