AMMAN, Jordan (CNS) — The Chaldean Catholic Church concluded a weeklong synod in Ainkawa, a Christian enclave in the northern Iraqi city of Irbil, in which laity from the church’s various dioceses in the Middle East and the diaspora also participated for the first time. 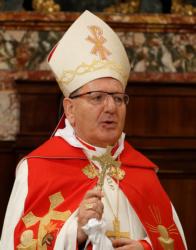 The synod, held Aug. 4-10 at the invitation of Cardinal Louis Sako, the Chaldean Catholic patriarch, brought together church leaders and parishioners from Iraq, the United States, Syria, Iran, Lebanon, Egypt, Canada, Australia and Europe to discuss issues vital for the church’s future in Iraq and worldwide.

Cardinal Sako said it was important to engage the views of the laity and to “support the participation of people in the life of the church” at such a critical moment in the church’s history. “The lay faithful, men and women, are members and partners of our church because of their faith and their common priesthood,” he said.

He said it was essential to “take advantage of their (laity’s) charisma” in the service of the church during what he described as a time of great difficulty in Iraq and Syria for thousands of Iraqi Christians who were forced to abandon their ancestral communities, including in Mosul and the Ninevah Plain.

“It is a good opportunity for us to study the complicated situation of our Chaldean Church in Iraq and diaspora, including the struggle with displacement, killing and destruction as well as current fears and concerns about the future,” Cardinal Sako told attendees.

“In such difficult circumstances, our faith should lead us to plant hope, joy and peace in the hearts of those we serve; respect them and create a friendly relationship with them, otherwise, we won’t grow up, improve and be trusted, but rather lose our credibility. Therefore, we should walk in the path of ‘evangelical conversion’ with all its aspects,” Cardinal Sako said.

Chaldean Archbishop Yousif Thomas Mirkis of Kirkuk, Iraq, told Catholic News Service by phone that the participation of the laity during two days of the synod, Aug. 6-7, was “a good experience.”

“We hope it is a good start for other future involvement. The first steps are new and open the possibility to other perspectives for the future,” he said of the 16 laypersons who attended.

The contingent included four lay women. Among them was Sister Maryam Yalda Shabo, superior of the Chaldean Sisters, Daughters of Mary Immaculate Conception, representing the patriarchal orders in Iraq.

Archbishop Mirkis said discussions centered on “liturgy, prayers, and the translation of the languages used in the diaspora for liturgy.”

Bishops also will be appointed for important towns in the predominately Kurdish areas of northern Iraq that are experiencing growth, in part because of the displacement of Christians.

“We need a bishop for Zakho because the diocese there is growing. We will split the dioceses in the Kurdish region. Amadiya and Duhok will become a diocese, while Zakho will become another,” Archbishop Mirkis explained.

In January, Archbishop Najib Mikhael Moussa of Mosul, Iraq was the first prelate installed since Christians were expelled from the city by Islamic State forces in 2014.

“He is doing his utmost to help Christians, but we know that the situation is very difficult to encourage people to return because many things, including universities, (schools, hospitals, and various infrastructure) are waiting to return,” Archbishop Mirkis said.

In a final statement, synod participants pledged “continued support to the displaced to help them return, build their homes and provide a source for their livelihoods.”

Other recommendations included: the Chaldean Church taking up its key role as a mediator with other Christians and various segments of Iraq’s mosaic social fabric; establishing a Chaldean Unified Fund to support joint projects and aid emergencies; organizing a Chaldean youth conference in Spring 2020 to address faith, marriage, and vocation; ongoing training to detect abuse; and preparing for a Chaldean Laity Conference in 2022.

Maronite Archbishop Joseph Soueif of Cipro, Cyprus, set the tone for the synod proceedings by leading a retreat during the assembly’s first two days.

As the conference opened, Cardinal Sako remarked on the challenges facing the Chaldean Catholic Church in a letter to Pope Francis.

“We can say that it has always been the ‘Church of the Martyrs.’ Even our Muslim brothers suffer for their life every day, and hope that in the shared pain, paths of hope for a better future can be opened,” he wrote.

He later told synod participants that “we pray also for our church, in particular, for the visit of Pope Francis to Iraq at this turning point in our history, for his presence and encouragement are what we need now.”