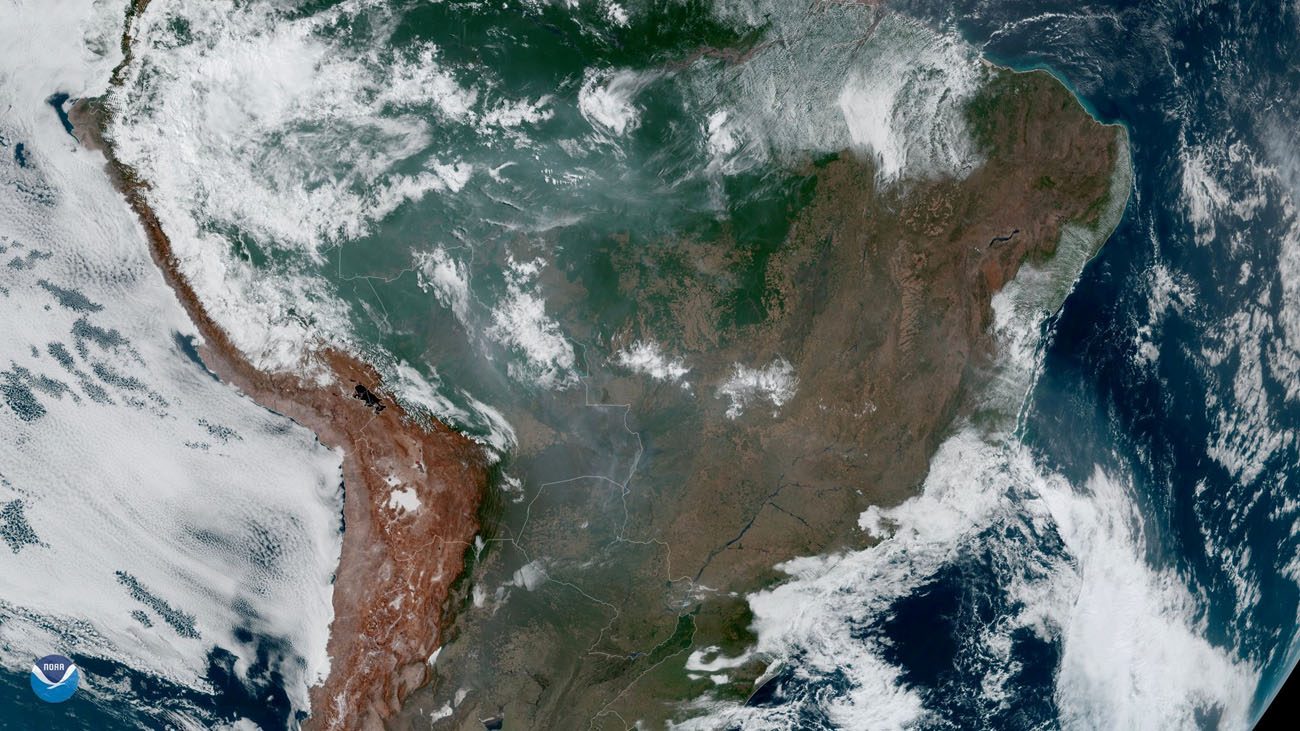 Fires burning in the Amazon rainforest are pictured from space by the geostationary weather satellite GOES-16 Aug. 21, 2019. Leaders of the Latin American bishops' council urged international action Aug. 22 to save the rainforest as massive fires continued to burn. (CNS photo/NASA, NOAA handout via Reuters)

UPDATED – VATICAN CITY (CNS) — Describing the Amazon rainforest as “vital for our planet,” Pope Francis joined the regions bishops in praying for action to extinguish the massive fires burning there.

“We are all worried about the vast fires that have developed in the Amazon,” the pope said Aug. 25 after leading the recitation of the Angelus prayer. “Let us pray that with the commitment of all they will be brought under control quickly. That forest lung is vital for our planet.”

Leaders of the U.S. Conference of Catholic Bishops and the Latin American bishops’ council also urged international action to save the Amazon rainforest from the fires.

“We urge the governments of the Amazonian countries, especially Brazil and Bolivia, the United Nations and the international community, to take serious measures to save the lungs of the world,” said the statement Aug. 22 by the top officers of the council, known by its Spanish acronym, CELAM.

“What happens to the Amazon is not just a local issue, but is of global reach,” the bishops said. “If the Amazon suffers, the world suffers.”

The USCCB statement, issued Aug. 27, echoed Pope Francis’ comments and expressed “solidarity with our brother bishops in Latin America who … have expressed their desire for a prompt extinguishment of these fires.” The U.S. bishops also welcomed a decision by leaders of industrialized nations “to extend financial support for these efforts.”

The Amazon produces 20% of the world’s oxygen, according to scientific measurements.

Brazil’s space research institute, which is responsible for satellite monitoring of the Amazon, had reported that the number of wildfires, common in July and August, had reached a record number already in 2019, with 72,843 fires spotted.

The U.S. space agency, NASA, Aug. 21 and 22 released satellite imagery showing how smoke from the fires had created “a shroud that is clearly visible across much of the center of South America.”

French President Emmanuel Macron called on world leaders to place the fires at the top of their agenda as they meet in France for the Group of Seven summit starting Aug. 24. Attendees will include President Donald Trump, Macron and the leaders from Canada, Germany, Italy, Japan and the United Kingdom.

Brazilian President Jair Bolsonaro has said publicly that he believes nongovernmental agencies — including Catholic-backed agencies such as the Land Pastoral and the Indigenous Missionary Council — are behind the illegal burnings because they have opposed his call for development of the rainforest. The organizations have strongly denied the allegations.

In its edition released Aug. 23, the front page of the Vatican newspaper, L’Osservatore Romano, led with two articles about the Amazon fires. The first, titled “The Amazon must be protected,” included general coverage of the fires’ scope and the alarm launched by U.N. Secretary-General Antonio Guterres. A second article reported on the CELAM statement under the headline, “Save the forest to save the world.”

In their statement, the bishops noted that the upcoming October Synod of Bishops for the Amazon will discuss the plight of the indigenous living in the area as well as the deforestation of the region. Sixty percent of the Amazon rainforest is in Brazil.

“Hope for the proximity of the Amazon synod, convened by Pope Francis, is stained by the pain of this natural tragedy,” the bishops said. “To the brethren indigenous peoples who inhabit this beloved territory, we express all our closeness and join your voices with yours to shout to the world for solidarity and pay attention to end this devastation.”

And while the deforestation of the world’s largest tropical forest and the violence against the indigenous population there have been a great concern to the Catholic Church, the upcoming synod also has caused apprehension for the Bolsonaro government.

In February, the Brazilian government was forced to deny that it was spying, through its intelligence agency, ABIN, on more “progressive” bishops and priests working on the synod.

The government’s Institutional Security Cabinet, known as ISC, however, admitted it was worried that the meeting would be used to criticize the Bolsonaro administration’s stance on environment and indigenous rights.

“There are no general criticism of the Catholic Church. There is the functional concern of the Minister of State Chief of the Institutional Security Office for some points of the synod’s Amazon agenda that will take place at the Vatican in October this year,” said an ISC statement at the time.

The CELAM bishops, quoting Pope Francis from his homily at his papal inauguration in March 2013, requested to “please ask all those who hold positions of responsibility in the economic, political and social fields, all men and women of goodwill: (to) be guardians of creation, of the design of God inscribed in nature, guardians of the other, of the environment; let’s not let the signs of destruction and death follow the path of our world.”

The declaration was signed by Archbishop Miguel Cabrejos Vidarte, of Trujillo, Peru, CELAM president, as well as the officers of the organization.

Contributing to this story were Lise Alves in Sao Paulo and Cindy Wooden at the Vatican.