Mexican bishops: No matter how life is conceived, abortion is wrong 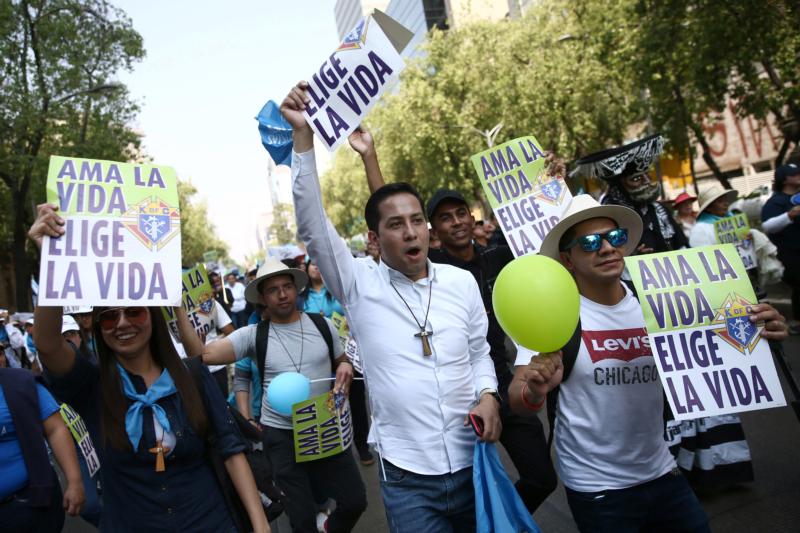 Activists participate in an anti-abortion march in Mexico City May 18, 2019. The sign reads, “Love life. Choose life.” In an Aug. 13 statement, the Mexican bishops’ conference expressed concerns over a Supreme Court decision that upheld a health norm allowing access to abortion in public clinics if a woman has been the victim of sexual violence. (CNS photo/Edgard Garrido, Reuters)

MEXICO CITY (CNS) — The Mexican bishops’ conference has expressed concerns over a Supreme Court decision that upheld a health norm allowing access to abortion in public clinics if a woman has been the victim of sexual violence.

“We say clearly: Respect for the right to life cannot be infringed upon by the circumstances in which a human being is conceived,” the conference said in an Aug. 13 statement.

“The Mexican bishops are not trying to impose a religious concept on the life and dignity of the embryo, rather adhere to the guarantee of the right to life, which should be administered by a government respectful of human rights.”

In an 8-3 decision Aug. 5, the court ruled a norm known as NOM-046 was constitutional, rejecting a petition from Baja California state government and the Aguascalientes state legislature to overturn the measure.

The norm permits women, having suffered sexual violence, to request an abortion at any public health clinic without first filing a criminal complaint with the police. Only a sworn statement would be necessary.

It also permits a victim over the age of 12 to receive an abortion in such circumstances without obtaining the permission of a parent or guardian.

The bishops’ statement recognized “a culture rooted in violence and sexualization against women in Mexican society.”

It also cited the 2016 national survey of “the dynamics in domestic relationships” in which 41.3 percent of women over the age of 15 reported having suffered at least one incident of sexual violence.

“It is imperative to signal that the unrestricted practice of abortion does not constitute a real solution and profound solution to the problem of sexual violence against women,” the statement said.

Abortion in Mexico is only decriminalized in Mexico City, where it is permitted during the first 12 weeks of pregnancy. Interior Minister Olga Sanchez Cordero, who was a Supreme Court justice when the Mexico City abortion law was declared constitutional, has proposed unifying the country’s various criminal codes — which would make the Mexico City rules national.

“There are many important issues and, at this time, I think the most important is cleaning corruption from government,” he said in March.

NEXT: Assumption feast invites people to look to heaven with hope, pope says