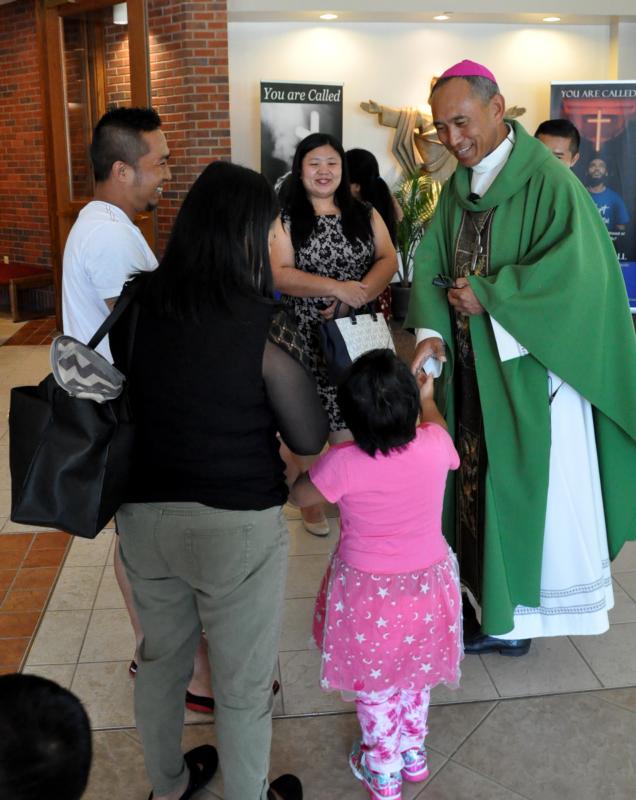 Bishop Lucius Hre Kung of Hakha, Myanmar, greets Hakha Chin refugees after celebrating Mass at St. Barnabas Church in Indianapolis Aug. 4, 2019. The bishop visited the community at the parish, learning that it has grown to about 200 people. (CNS photo/Natalie Hoefer, The Criterion)

Visiting the refugees and parish again in early August, he was struck by the difference two years has made.

“There is now a lot of joy and confidence and integrity in the (refugee) community,” Bishop Hre Kung said of the 200 Hakha Chin members of the parish. “There is a big difference. You can read it on their faces.”

There was a smile on the bishop’s face as he spoke of his joy at the improvement among the people whom he knows have endured hardship and trauma.

First came the flight for their lives from the violence, destruction and bloodshed of the decades-long conflict between Myanmar’s oppressive military junta and rebels opposing the government.

Next came the hardship of living in refugee camps. St. Barnabas parishioner Paul Hnin, 35, recalls his own seven-year experience surviving in such conditions.

“They have 15, 20 people living in a room this size,” he said, looking around the roughly 8-foot by 10-foot meeting room at St. Barnabas where he spoke with The Criterion, newspaper of the Archdiocese of Indianapolis. “And only one bathroom for these people. It is no good.”

Then there was the struggle of adjusting to a new home with new challenges and a new language.

Through it all, Father Daniel Mahan, St. Barnabas pastor, said, the Hakha Chins’ Catholic faith has been their refuge.

“Many of them have suffered greatly through the years leading up to their arrival in the U.S,” he said. “And they have shown me that their faith is what has sustained them and what they treasure most.”

But it was difficult to fully practice that faith before learning the English language.

Hnin said while there are two other Myanmar refugee groups at Indianapolis parishes — the Karenni at St. Pius X and the Zomi Chin at St. Mark the Evangelist — the Hakha Chin are unable to communicate with them. The Karenni and Zomi Chin learned the national Burmese language in school as well as their own tribal dialects. Not so for the people of the Hakha Diocese, Bishop Hre Kung said.

“The difference is many Hakha Chin had no chance to go to school,” he explained. “They only know their local language.”

In that language a leader of St. Barnabas’ Chin community taught catechesis and the refugees gathered for communal prayer. But there was a gaping hole in their Catholic faith life.

“There was no (priest) to say Mass or offer the sacraments in their language,” said Katie Dollens, St. Barnabas’ director of marketing and communications. “So Protestant and Baptist churches who had Chin-speaking communities said, ‘Come to us. We’ll take care of you.'”

During his visit in 2017, Bishop Hre Kung took note of the need for a priest who could minister in the Hakha Chin dialect.

Through cooperative efforts of the archdiocese and the Hakha Diocese, Father Eustace Thang arrived from Myanmar in December 2018 to minister to the Chin at St. Barnabas in their native language.

“Now that Father (Thang) is here, there’s a big push to reach out to Catholic Chins and let them know that Mass and the sacraments are offered in Chin at St. Barnabas,” Dollens said.

“When Father (Thang) came, the ones who went to other churches started coming here,” he said. “Now there are about 47 families and singles.”

Learning about the faith is important, Bishop Hre Kung said. But so is common education.

“When Bishop Lucius came here two years ago, he said the Hakha Chin need to build a community, so the children need to be educated,” Hnin said.

St. Barnabas pastoral associate Patty Cain, who works closely with the parish’s refugee community, said the Chin families, the parish and its school took the bishop’s words to heart.

Such an accomplishment makes Father Mahan beam with pride.

During his visit Bishop Hre Kung met with Indianapolis Archbishop Charles C. Thompson Aug. 6 before traveling to Illinois, the next of several stops to U.S. Catholic Chin communities during a monthlong tour.

“Because of his pastoral care to the Chin community and helping them to survive in their faith, I want to express my gratitude to the archbishop and all of the community,” Bishop Hre Kung said. “For two bishops to meet is good and natural. We inspire and encourage each other.”

“He’s a very kind bishop, a good man of faith and devotion,” he said of Bishop Hre Kung. “He truly has a pastoral heart for his people, coming so far to visit them and the priests.”

While there has been good progress, needs remain within the Hakha Chin community.

With Hnin translating, Martin Ling, 50, noted that one need is for “transportation to get our children to school. We don’t want our kids to go to the public schools, but transportation (to St. Barnabas School) is hard because there is no bus.”

Lack of transportation also impacts the ability for Chins to attend English as a second language classes.

Even if the means are found to attend such classes, Dollens said, “they don’t have a network to have someone watch their children. And many citizenship classes don’t allow children.”

“Every situation, there’s things we need to figure out how to break down barriers so we can help them become fully participating members of the community,” she said.

Despite the remaining hurdles, Bishop Hre Kung is pleased with the progress of the Hakha Chin community and hopes to continue accompanying them “to be good Catholics and good citizens in this land.”

Asked when he might return, the bishop grinned and said, “When God allows.”

NEXT: Back to school Italian style: Papal greeting and gelato quests